IT Workers on the Move With Globalization

Talented professionals, including information-technology workers, chose to migrate for jobs and high wages. Such workers have often moved from developing countries in Asia and Eastern Europe to the wealthy developed nations, where graying populations and a lack of youth interest in mathematics and other technical subjects, created a need for skilled workers. But a new shift is also on, reports Anthony D’Costa, professor of Indian Studies at the Copenhagen Business School. One-time sending countries, like China and India, now court their native talent, with economic opportunities and innovative R&D centers. As companies all over the globe compete for the youngest, savviest tech workers, both developing and developed countries must devise labor policies that address increasing economic and social divides created by this class of highly paid workers. – YaleGlobal

IT Workers on the Move With Globalization 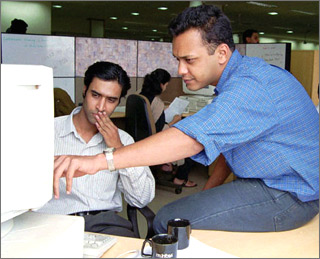 Showing the way: Indian and Chinese IT workers are beginning to return home to help the economy, but at higher pay

COPENHAGEN: With economic globalization, talented professionals are on the move. One visible group is the information technology (IT) workers. They hail from select developing countries such as India, China, the Philippines and Eastern Europe who move to the OECD economies. The motivations for moving are mainly economic, seeking better jobs and higher income, although interlocking social factors such as family unions also influence the pattern of mobility.

IT is an important part of the “new economy.” For example, US spending on IT and software services exceeded all investment in industrial capital equipment and accounted for 47 percent of all non-residential investment in 2004. Most OECD countries want a share of this sector, but they face challenges in obtaining technical talent locally. The labor market mismatch contributes to international mobility, but is compounded by the spectre of declining fertility rates, an aging population and unpopularity of technical studies. China and India have become the major suppliers of technical professionals, with India having the largest pool of young people. 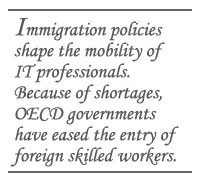 Immigration policies shape the mobility of IT professionals. Because of shortages, OECD governments have eased the entry of foreign skilled workers. For example, the US has an employment-sponsored non-immigrant work visa called the H1-B, available to foreign professionals in specialty occupations and valid for six years. In 2005, 287,418 H1-B visas were approved; of these, 43 percent or 123,590 such visas went to Indian citizens, and 44 percent “were for workers in computer-related occupations.” Other visas such as the L-1 support intra-company transfers of personnel from one international location to another. The mobility of Indian IT professionals began with onsite services in the US, followed by offshore development. Both entailed temporary movement of talent. As IT grew everywhere, demand for Indian talent soared, increasing salaries, compensation packages and labor mobility.

There are both positive and negative effects of international mobility. In the 1970s the outflows of talent were viewed as brain drain and public waste. If there is a relatively large outflow of talent over a long period, economic growth could be reduced, poverty increased and inequality worsened. The Philippines may fit this unfortunate bill. Inequality results from a relatively smaller share of and greater demand for highly-skilled professionals, evident from the huge income differential between Indian IT professionals and others. Today emigration is seen as international mobility with several positive externalities such as remittance income, national human capital development and national links to international innovation centers.

Remittance-income contributes foreign exchange and potentially economic development. A World Bank estimate put the total remittance inflows to developing countries at $126 billion in 2004. Remittance income raises the economic well-being of most households. Nationally, this source of income source helps offset international debt obligations and allows importation of critical technologies. The engagement of IT professionals with a globalized industry brings in large export revenues, complementing the remittance income. Today, India’s foreign exchange reserves are nearly $200 billion. Too rapid an expansion in foreign currency inflows leads to currency appreciation and inflationary pressure, known as the Dutch disease, commonly associated with oil economies. The rising value of the Indian rupee could undermine the competitiveness of both non-IT and IT exports. 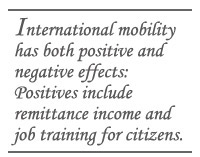 But international mobility also means that Indian, Chinese and other professionals get to interact with their international counterparts located in innovation centers in the OECD countries. This facilitates the exchange of technical and commercial knowledge and opens up new export business opportunities. The strong links between Bangalore, Shanghai and Silicon Valley are illustrative of this global network. One such international network is the Indus Entrepreneurs, or TiE, initiated in Silicon Valley in 1992 by Indian IT entrepreneurs. It has more than 40 chapters and 6,000 members worldwide. Similarly the Chinese Institute of Engineers in the US has strong links with its counterpart in Taiwan.

Mobility contributes to national human capital development – witness the expansion of educational institutions in the southern Indian states of Karnataka and Tamil Nadu, training tens of thousands of engineers and IT professionals each year. In India engineering admissions increased fivefold between 1992 and 2004. The number of IT admissions increased from 73,000 students in 1992 to 342,000 in 2004. In the Philippines too, mobility has raised the share of mathematics and computer-science graduates between 1995 and 2000 from 7 to 10 percent of all tertiary graduates.

Mobility suggests that sending countries could gain their expatriate talent back if professional and economic opportunities were attractive, as they are increasingly so in China, India and Taiwan. Governments are busy courting talent by establishing R&D centers and science-technology parks. 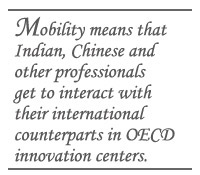 These initiatives are designed to enhance the quality of economic growth by deploying expatriate talent for international competitiveness. Taiwan and China, and to a limited degree India, have experienced the return of high-skilled IT professionals. Reverse international mobility is important as evidenced by the fact that 10 of the top 20 Indian software firms were launched by non-resident Indians from the US. Clearly favorable economic and social conditions, some of which are policy-induced, could tap into the overseas brain bank.

Rich countries benefit directly from the subsidized supply of foreign IT workers. Foreign talent helps maintain industry profitability. There are other benefits too. It has been estimated by M.A. Desai, D. Kapur, and J. McHale (2002) that the US government collects nearly $23 billion in payroll taxes from Indian H-1B visa holders alone. Indian and Chinese engineer-entrepreneurs in Silicon Valley contribute to US employment in R&D and design. Receiving countries also benefit from foreign students’ revenues but more importantly from the future availability of highly educated foreign professionals.

While businesses complain about shortages, US labor groups argue shortages are a fiction. The truth lies somewhere in the middle. The reality is that as technology changes, older workers fall behind, while young professionals from India and China cost less and are knowledgeable about current innovations. Companies naturally prefer to hire young, technology savvy IT professionals rather than retrain existing workers. By hiring foreigners, OECD firms focus on their core competencies, while the foreign professionals benefit from higher incomes and skill upgrading. 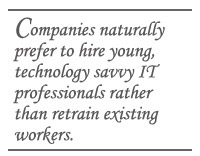 Politicians are sensitive to local pressures for job protection. In an election year with a recession looming for the US, large xenophobic sentiment could raise its ugly head. However, job losses, while real, might be a result of structural, cyclical and technological factors rather than alleged unfair foreign competition. Of course, undue reliance on foreign talent could increase unemployment and depress wages for local IT workers. Consequently, inequality could rise, although the mechanisms for this outcome are complex. Globalization is a complicated beast and so are its outcomes.

The mobility of IT professionals suggests a range of costs and benefits for both receiving and sending countries, with the latter benefiting handsomely. The real test will be whether the US and India can cope with the deep economic and social divisions that globalization seems to leave in its wake.

Anthony P. D’Costa is a professor of Indian Studies at the Copenhagen Business School, Copenhagen and editor of “Technology, Globalization, and Development” and “India’s Changing Role in the Global Political Economy” book series. He analyzes the topic at length in “The International Mobility of Talent
Types, Causes, and Development Impact,” published by Oxford University Press.