Japan Dips its Toe in the Taiwan Strait

China might not be an "outpost of tyranny," but the new Bush foreign policy team again considers the Asian giant a strategic competitor, writes political scientist Wenran Jiang. Concerns over China's military development and heightened aggressiveness towards Taiwan have led the United States to reassess its previous conclusion that China posed no serious threat to the global balance of power. Despite the historical animosity between the two Asian countries, Japan has been relatively quiet on the issue of Taiwan - until now. A joint US-Japanese statement called for "the peaceful resolution of issues concerning the Taiwan Strait through dialogue" - a thinly veiled reminder about their interest in preventing Chinese military action. Ultimately, writes Jiang, by providing grist for the mill of Beijing hardliners, Tokyo and Washington may actually hamper long-term stability in East Asia. – YaleGlobal

Japan Dips its Toe in the Taiwan Strait

A more assertive stance by Washington and Tokyo may signal a changing US approach to China
Wenran Jiang
Wednesday, March 2, 2005 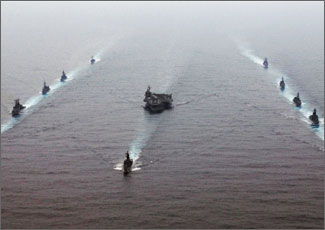 New formation: US and Japanese navy in a joint exercise. Washington believes improved Chinese capabilities threaten its position in the Pacific. Enlarged image

EDMONTON, Canada: There are clear indications that the Bush administration, alarmed by the Chinese military's speedy buildup across the Taiwan Strait and encouraged by Japan's strong stand against Beijing, is moving to re-list China as a strategic competitor. Washington has not yet labeled China an "outpost of tyranny," as North Korea, but warnings of a China threat and a recent joint US-Japanese statement designating Taiwan as a "common strategic objective" have marked a new turn on Asia's security chessboard. It remains to be seen whether the emerging divide will force other countries to choose sides. Beijing, however, will likely confront a potential containment with new counter-measures.

High-ranking US officials have expressed serious concerns about China's military development at various hearings in the past two weeks. Secretary of Defense Donald Rumsfeld laundry-listed China's expanding military and cautioned, "They're growing rapidly, and they're making significant investments in defense capabilities, military capabilities." Vice Admiral Lowell Jacoby, director of the Defense Intelligence Agency, argued that the Chinese have been working to "improve their survivability and war-fighting capabilities, enhance their coercion and deterrence value, and overcome ballistic missile defense systems." He concluded, "This effort is commensurate with its growing power and more assertive policies, especially with respect to Taiwan." And CIA director Porter Goss warned, "Improved Chinese capabilities threaten US forces in the region."

Openly contradicting conclusions reached last year by the Independent Task Force on Chinese Military Power, these charges suggest a reassessment of Chinese military capabilities by the new Bush team. The panel, appointed by the first Bush administration, found that "the balance between the United States and China, both globally and in Asia, is likely to remain decisively in America's favor beyond the next 20 years."

Several factors may underlie the current departure from such a conclusion. First, in drafting an "anti-secession law," China has been perceived as more aggressive in its attitude toward Taiwan. (Beijing says the law, modeled on pre-Civil-War US law, is designed to prevent Taiwan from declaring independence.) Second, in its worldwide quest for energy, Beijing has pursued closer ties with regimes that Washington deems hostile; Iran, for instance, signed a US$100 billion deal to supply China's gas and oil for the next 25 to 30 years. Third, the second Bush foreign policy team is full of "hawks," who believe that China's growing power must be contained by force. Finally, the US military, stretched thinly in Iraq, may feel vulnerable in a potential cross-Strait conflict, and hopes to deter China by publicly announcing its concern over Taiwan.

This may explain the recent joint statement, wherein US Secretary of State Condoleezza Rice, Rumsfeld, and their Japanese counterparts announced further collaboration between the two allies. Their call for "the peaceful resolution of issues concerning the Taiwan Strait through dialogue" marked the first time the US-Japanese alliance included Taiwan in their joint military concern.

Tokyo has treaded carefully on the Taiwan issue. In 1996, when the US-Japan mutual security treaty was upgraded, Japan vaguely defined its expanded military operational sphere as "Japan's surrounding areas" - and refused to clarify the geographic boundaries. But in recent years, Japan is under increasing pressure by the rapid modernization of its giant neighbor's military and space program. Meanwhile, deepening economic ties have also complicated matters. The Chinese market has been crucial in lifting Japan's stagnating economy: Last year, China surpassed the United States to become Japan's largest trading partner, with Tokyo running a surplus. China, however, has also become a competitor for strategic resources, and Beijing has been assertive in exploring gas and oil reserves in the East China Sea very close to the border claimed by Japan. The recent intrusion of a Chinese submarine into Japan's territorial waters made Tokyo more nervous about Beijing's intentions.

In response, Japan revised its defense guidelines to identify China as a threat; its Self Defense Forces have outlined three possible Chinese invasion scenarios, and are deploying troops accordingly. On the Chinese lunar new year, Tokyo claimed control of an island chain northeast of Taiwan, the sovereignty of which Beijing and Taiwan also claim. Tokyo must have concluded that a potential cross-Strait war would interrupt Japan's energy supply routes from the Middle East. In case of hostility, both the United States and Japan would inevitably be involved, so it is time for both to express strategic clarity over Taiwan. Shinzo Abe, acting secretary-general of Japan's ruling Liberal Democratic Party and Prime Minister Junichiro Koizumi's likely successor, put Japan's position blatantly: "It would be wrong for us to send a signal to China that the United States and Japan will watch and tolerate China's military invasion of Taiwan."

Beijing is outraged by this development. Dismissing it as meddling in China's internal affairs, the foreign ministry expressed its "resolute opposition" to the joint US-Japanese statement on Taiwan. If over the years China has had to reluctantly accept the United Sates as a key party in the cross-strait relations, Japan's involvement in the Taiwan issue is even more difficult to swallow for the Chinese leadership.

The Chinese consider Japan's 1895 seizure and subsequent 50-year occupation of Taiwan one of the most humiliating events in the country's modern history. Most Chinese today do not think the Japanese government has sincerely apologized for the brutal atrocities committed by its army in the early 20th century. A key issue driving a surging anti-Japanese sentiment in China is Koizumi's annual visits to Yasukuni Shrine, where war criminals are buried among the war dead, and a place many Asians regard as glorifying Japan's past aggressive wars. As a result, the top leaders of the two countries have not visited each others' capitals since 2001.

Taking advantage of the strained Sino-Japanese political relationship, pro-Taiwan groups in Japan are gaining momentum in their push for more official contacts with Taipei. Ignoring Beijing's protests, Tokyo hosted a birthday reception for the Emperor in Taipei in 2003, and last year issued a visa to Taiwan's former president Lee Teng-hui, who openly advocates a US-Japan-Taiwan alliance against China.

Now, Japan's new overt posture on Taiwan will likely confirm Beijing's long-held suspicion that Tokyo has been working with Washington to prevent China from ultimately achieving unification with Taiwan. President Bush, in last week's fence-mending tour of Europe, lobbied hard against the EU's lifting its arms embargo on China, although Washington plans to sell Taiwan as much as US$18 billion in advanced weapons. And the United States has also made it clear that it is seeking permanent military bases in Afghanistan. This will enhance the argument of Beijing's hardliners that Washington is currently assembling a much more comprehensive containment structure against the rise of China than it had ever achieved against the Cold-War-era Soviet-Chinese bloc.

Thus, the US-Japanese inclusion of Taiwan as a "common strategic objective," although designed to moderate China's growing assertive behavior, may be counter-productive. For long-term stability in East Asia, Washington and Tokyo should positively respond to China's suggestion to hold strategic consultations at senior ministerial levels as means of dealing with worsening relations. And both can work with the EU on effective regulations of arms sales to China while limiting US weapons sales to Taiwan in exchange for the mainland halting its missile deployment anddeployment and other military buildups across the Taiwan Strait.

Wenran Jiang, twice a Japan Foundation Fellow, is associate professor of political science at the University of Alberta, Canada.