Russia and Japan launched a new program aimed at resolving a territorial dispute that has lingered since 1945 when the Soviet Union seized the islands of Kunashir and Iturup. Japanese with no ties to the islands boarded a ship for a visit. One scholar suggests that the trip may have been more symbolic with differences between Russia and Japan still wide. Japanese Prime Minister Shinzo Abe and Russian President Vladimir Putin had agreed to study joint rule of a group of contested islands, aiming for a peace treaty before this year, reports the Wall Street Journal, but arguments and accusations interfered. Putin suggests the islands are too small to disrupt relations between the two countries, but Abe says not so fast. “Tokyo has frowned on Moscow’s buildup of military infrastructure on the islands, and Japanese media have reported that Russia plans to deploy additional missile systems on two of the islands,” report Ann M. Simmons and Chieko Tsuneoka. “Russian authorities haven’t confirmed the reports that it plans to deploy additional missiles.” Meanwhile, public opinion in Russia creeps toward relinquishing the islands. – YaleGlobal

Tourists visit contested islands of of Kunashir and Iturup, long a source of conflict between Japan and Russia with concerns over potential military use
Ann M. Simmons and Chieko Tsuneoka
Tuesday, November 5, 2019

Read the article from the Wall Street Journal about a territorial dispute between Japan and Russia.

Ann Simmons is the Wall Street Journal’s Moscow Bureau Chief. She has spent more than 25 years reporting from Europe, Africa, the Middle East and North America.

Chieko Tsuneoka is an experienced researcher with over 20 years’ experience in assisting foreign media in Japan, covering a wide range of topics, from politics and culture to business and security issues. 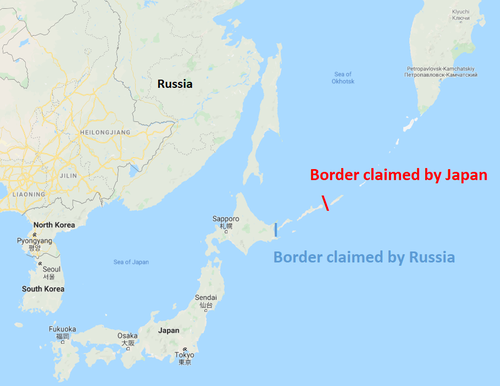 Too close for comfort? The Soviet Union took control of the islands of Kunashir and Iturup in 1945, and Japan’s leaders worry about possible military installations (Google map)

Russia Looks Both East and West