The Japanese approach to immigration has been characterized as xenophobic, at worst, and ambivalent, at best. While a free-trade agreement with the Philippines was celebrated for allowing increased access for overseas caretakers, a subsequent policy restricting entertainment visas may result in a net loss of over 70,000 foreign workers. According to David McNeill, Japan's consistently shrinking labor force may necessitate the opening of its borders - a contrast to the country's seeming reluctance to welcome outsiders. And as McNeill reports, Tokyo has a choice: Either take a proactive approach to immigration reform, or be forced into a reactive scramble for damage-control. –YaleGlobal

The island nation faces a population crisis but does not appear to like the possible solution: mass immigration
David McNeill
Thursday, January 13, 2005 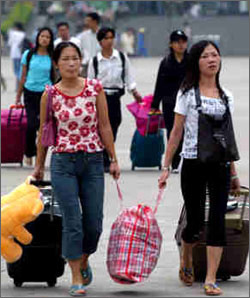 TOKYO: In November, 2004 headlines touted a free-trade deal signed by Japanese Prime Minister Junichiro Koizumi and Philippine President Gloria Macapagal Arroyo as a move toward an enlightened policy on foreign workers. Allowing Filipino caregivers to work in Japan, the agreement appeared to be a win-win, ameliorating Japan's need for migrant labor and generating crucial remittance income for Filipino families. On closer inspection, however, Japan continues to hold the rest of the world at bay, even as a looming population crisis threatens to send the world's second largest economy plummeting down the economic league tables.

Most observers believe the trade deal will allow, at most, a few hundred Filipino nurses to work indefinitely in Japan, provided they pass a demanding Japanese proficiency test. The Philippines, which relies on remittances from roughly 8 million of its citizens abroad to prop up its economy, would obviously prefer that Japan accept more. Not only has Japan stalled on this request, but the Justice Ministry announced cuts in annual entertainment visas to Filipinos from 80,000 to 8,000. Tokyo's new "enlightened policy" on immigration will result in over 70,000 fewer foreigners.

The idea of substituting a visa policy that effectively supports the Japanese sex industry, which attracts many Filipinos on entertainment visas, with one that guarantees reasonably secure, qualified work, might appear more humane - but, even here, the picture is not so clear. Many believe that trainee Filipino nurses will mainly be asked to provide incapacitated elderly people with home care, a notoriously low-paid and difficult job. Moreover, the policy sanctions the continued break-up of Filipino families, as well as the drain of much-needed medical talent from one of Asia's poorest countries.

Japan's stingy, muddled solution to the Filipino visa problem symbolizes the country's general approach to foreign labor. Conservative bureaucrats sometimes present the country as a sort of hermetically sealed racial club, at risk of being contaminated by outsiders. Until recently, even the Japan-born children of Chinese and Korean laborers brought to the county before World War II had to register as "aliens."

Today, just 1.5 percent of Japan's population is classified as foreign. Although the government, under pressure from manufacturers, has allowed about 280,000 Brazilians to enter the country since 1990, it has done so by relying on what anthropologist Tom Gill calls a "blood-relation" approach: Most had to prove Japanese ancestry before receiving a visa. Says Gill, "If you could prove you had two Japanese parents, you got a longer working visa than if you had one; if you had a parent, you could stay longer than if you had a Japanese grandparent, and so on."

The current foreign-born labor force in Japan, at a fraction of one percent, stands in stark contrast to Australia (24 percent), the United States (16 percent), Britain (5 percent), and even Ireland (7 percent), which has only experienced large-scale immigration since the early 1990s. Further, Japan only accepts roughly 10 asylum seekers each year. Unique among the advanced countries, it has not taken in a single Kurdish refugee, despite its support for the Persian Gulf War, which led to the flight of hundreds of thousands of Kurds from northern Iraq. As one UN official told me last year, "Japan wants all the benefits of globalization but none of the headaches."

After years of holding back the foreign hordes, however, Tokyo must finally accept that it may need immigrants - lots of them. With consistently decreasing birthrates, the current population of 127 million is set to plummet to just over 100 million by 2050, shrinking the country's labor pool by more than one-third and dragging down national wealth. Meanwhile, Japanese life expectancy rates continue to increase, meaning the contracting workforce will be asked to support a growing army of pensioners. According to long-time Japan observer Alex Kerr, by 2005, there will be just two younger workers supporting each retired person, down from 11 in 1960. This is a system, in other words, headed for collapse.

Some business and political leaders are alarmed enough to have begun looking to the massive pool of cheap labor on Japan's Asian doorstep. The ex-chairman of Keidanren, Japan's top business federation, Hiroshi Okuda, said in November 2002 that his organization favors importing up to 6.1 million foreign workers. Hidenori Sakanaka, director of the Tokyo Immigration Bureau, went further in 2004 when he said that Japan will have to accept close to 30 million immigrants over the next half century. Even Tokyo governor Shintaro Ishihara, despite a well-earned reputation for xenophobia, said in a 2003 interview that he supports the importation of millions of legal foreign workers, although he added he would put this process under the control of the police.

Time will tell whether such high-powered support for the previously unthinkable in Japan - mass, controlled immigration - signals a policy sea-change. But for now, the clash between the demands of a business world that needs cheap, docile foreign labor and an outdated state ideology that has taught millions of Japanese that foreign means "alien" is visible all over the country, where tales of discrimination are rife. Outside of the main cities, some businesses openly display "No Foreigner" signs. Immigration authorities have set up a controversial "snitch site" encouraging Japanese to report suspicious foreigners, whom the police blame for rising crime rates. Meanwhile, the government has promised to again make Japan "the world's safest country," explicitly linking this goal to the attempt to slash foreign crime and halve the number of illegal workers, currently estimated at 250,000 people.

How much of this concern about foreign crime is justified? The National Police Agency announced in May 2004 that crime by foreigners rose again in 2003 and that it had caught over 40,000 foreign criminals. Critics, however, point out that one-third of these crimes were violations such as visa and other administrative infringements, which only foreigners can commit; only 2.4 percent of all crime in Japan is committed by non-Japanese. Others accuse the police of trying to shift the blame for soaring crime and plummeting detection rates, which have dropped below 20 percent for the first time since the Second World War. Teranaka Makoto, secretary general of Amnesty Japan says: "The police used to use fear of juvenile crime to increase their budget, now its foreigners."

Japan, of course, is hardly unique in struggling to deal with the demands of a globalized world, but it is increasingly out of step with other developed countries, most of which have well-integrated foreign populations and laws to protect them. Many in Japan wonder when the country will catch up. Tony Laszlo, director of Issho Kikaku, an NGO that researches multicultural issues in Japan expresses these concerns: "Countries and governments can change (their immigration policies) in two ways ... either with vision - making bold, inventive and imaginative decisions. Or by necessity, which is more painful, because you're changing under duress."

Laszlo and many others hope for the first option, but in the meantime, the clock is ticking. Japan has a history of massive policy reversals in times of national crisis, and may yet decide to relax its emigration laws, drop its unofficial quotas on foreign workers, accept more refugees, and introduce an anti-discrimination law. But it needs to act soon.

Dr. David McNeill teaches at Sophia University in Tokyo and writes regularly for a number of publications, including the London Independent newspaper and the Irish Times.