Jobs Can Be Outsourced, Not Politics

The American outcry about outsourcing stems not just from job loss, but also from the politician's favorite platitude - trade. According to Princeton historian, Harold James, ascribing job loss to trade is fraught with complications. Moreover, from a historical point of view, it is a recurring theme that often ends terribly. As James notes, throughout the latter part of the 19th and early part of the 20th century, workers in both the US and Europe blamed trade and migration for their plight. Yet when governments enacted protectionist measures, the results were disastrous - national prosperity fell. At other times, such as the latter half of the 20th century when the US faced competition from Japan, Washington manipulated exchange rates, trying to increase the attractiveness of American products. But such a practice faces greater difficulty today with so many economies pegged to the dollar. Nevertheless, the politician still faces the same call to heed his or her constituents' concerns. Consequently, James asks why trade should suffer so many attacks; he attributes the answer to psychology, rather than economics. Technology, certainly a leading cause of job loss, lacks a human face, while people are used to outside threats. Indeed, technology now allows ever greater numbers of products to be traded. In the 19th century merchants traded mainly sugar and spices, which soon included livestock and grain. Now, even services like call centers can be traded thanks to the Internet. Taking a lesson from the past, greater integration through free trade will lead to higher income, though there will be losers, James argues. The key is to cushion the negative effects, and to ensure other social goods like insurance and pensions remain stable. One avenue James deems not workable is to outsource politics to organizations like the WTO. Globalization's effects may be worldwide, but its backlash remains at home. - YaleGlobal

Jobs Can Be Outsourced, Not Politics 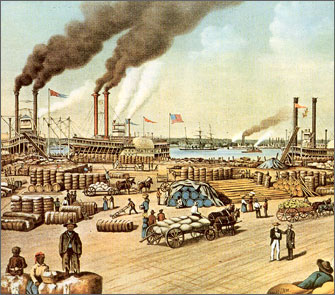 Port of New Orleans in 1884: Trade then was in high-value products like sugar and coffee, not in technology-driven services.

PRINCETON: When Greg Mankiw, the chairman of President Bush's Council of Economic Advisers, recently talked about outsourcing as "a good thing" he was simply repeating an economists' commonplace. When both Democrat and Republican politicians professed outrage at the callousness of Mankiw's logic, they too were just repeating a commonplace: a stock in trade of politics. History is replete with examples of politicking with trade - and its often disastrous consequences.

The debate about the effects of trade on workers is complex, because at any one moment trade is not the only force at work. In determining whether job losses or reduced incomes are the result of increased trade, it is hard to disentangle the effects of international trade from two other important realities of the modern international economy. Immigration may well also reduce wages for those sectors where immigrant labor replaces native workers. Technology also leads to changes in employment structure. 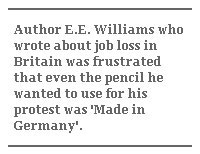 Historians find that the new complaints are in reality very old. Before WWI, workers in rich European countries and in the United States made very similar claims about the harmful consequences of migration and trade. At the end of the nineteenth century, British workers started to worry that "quality" jobs, in areas such as printing or piano-making, were being lost to Germany. Manufacturers joined in the debate and produced fierce polemics against the loss of the most skilled jobs to a rival power. E.E. Williams wrote the classic of the genre, "Made in Germany," in 1896 and started with recording his frustration that even the pencil he wanted to use for his protest was 'Made in Germany'.

Social scientists such as the distinguished German sociologist Max Weber started to claim that global capitalism was undermining labor standards and thus endangering cultural values. There was obviously a gigantic amount of cultural condescension in his argument that: "There is a certain situation of capitalistically disorganized economies, in which the higher culture is not victorious but loses out in the existential fight with lower cultures."

In that earlier age of worries about globalization, a backlash began, which in the end produced restrictions on migration and high levels of trade protection. When national protection became the major priority of most countries, in the 1920s and 1930s, the world became both poorer and less safe. In a vicious cycle, external forces were blamed for loss and disaster, and high levels of trade protection destroyed national prosperity. 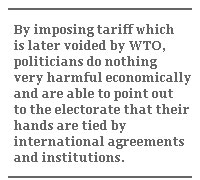 In the second half of the twentieth century, most countries avoided this sort of backlash, although their citizens had the same angst. The changing of employment patterns is a constant accompaniment of growth. In the early 1970s, and again in the 1980s, US workers and producers were upset about the loss of jobs to Japan. Some of the most skilled jobs, in automobiles, were lost; household appliances like TVs were no longer made in the US. On each occasion, the administration tried to respond to the job loss worries not by trade restrictions, but by altering exchange rates to make American products more competitive: first, the end of the gold convertibility of the dollar in 1971, and then, in 1985, the Plaza agreement to depreciate the dollar.

This is harder today, since many of the countries whose products are entering the United States peg their own currencies to the dollar. Politicians, however, still aim to show that they are "doing something" and that they "feel the pain" of their working-class constituents. Over the past few years, for example, the Bush administration has adopted tariffs to protect domestic industries. When these were later over-ruled by the WTO, the White House could claim that at least it tried. In this way, politicians do nothing very harmful economically and are able to point out to the electorate that their hands are tied by international agreements and institutions.

But why does the backlash against job loss so often focus on trade? The issue of who gets blamed in economic change is a story of psychology rather than economics. Technical change is often too omnipresent and also too unspecific to be a credible culprit. Humans are used to the idea of dangers coming from abroad, and when threatened like to revive ideas of a closed community reliant on its own resources to protect itself. Traded products thus look like threats to livelihoods rather than a pleasant enhancement of life. 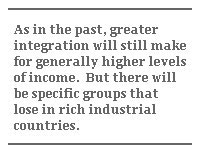 Most economists treat outsourcing of jobs as simply an extension of the logic of trade. The classical example for nineteenth century Britain was trade with Portugal, which had been opened up by a trade treaty one century earlier. Since wine production was costly and quite labor intensive in a fundamentally unsuited climate, it was better to produce manufactured products and sell them to Portugal and buy wine in return. The transaction benefited most people in Britain, except for those who worked in vineyards, and who might well have complained that their employment was being outsourced.

In the early twenty-first century, the increased technical ability to trade many services over long distances (such as the famous consumer call centers located in India) has made many begin to feel that foreigners are taking something away, rather than performing a useful function.

In each of the phases of backlash, a large part of the problem stemmed from the fact that trade was encompassing ever more products because of the advance of technology. Before the steamship and the railroad of the second half of the nineteenth century, shipped products had been high value spices, sugar, coffee or tea. Then grain and meat were transported, and previously invulnerable farmers were hurt. In today's world, technology allows a growing range of services to be traded.

The novelty of the present lies in the success of globalization in raising educational levels in large parts of the world. It is no longer simply unskilled jobs in manufacturing industries that are under pressure because of competition across frontiers. Today's trade deals in service products.

White collar positions in rich countries are thus vulnerable because of information technology and new ways of thinking about processing and controlling information flows. Managerial hierarchies can be streamlined with greater availability of information. They are also affected by the increased skill levels of immigrants. So the other two great historic motors of change - technology and immigration - also play a part.

When late-twentieth century societies dealt with the consequences of globalization, the most successful of them thought of ways of cushioning the effects rather than stopping the process of trade. The cushioning was done especially in Europe (to the greatest extent in Scandinavia), but the United States has social safety nets as well, and both Europe and the US massively shielded farmers from the effects of globalization. The same argument is still valid today. As in the past, greater integration will still make for generally higher levels of income. But there will be specific groups that lose in rich industrial countries. If the loss of jobs is associated with a loss of other social assets (such as health insurance and expectations about retirement pensions) these losses may well appear to be catastrophic. The pain of the losers will ensure that the process of general enrichment is accompanied by growing resentment.

Some people have argued that the downside of globalization and free trade would be better managed if politics were outsourced as well, through international institutions such as the WTO. But such an outsourcing of politics - that is, devolving power away from the national to supranational level - is sure to breed additional resentment. More people will raise the cry against globalization if they feel its bite and lack the power to protect themselves. The jobs may be outsourced, but the politics of backlash will stay painfully local.

The writer is Professor of History at Princeton University and author of “The End of Globalisation: Lessons From The Great Depression” (Harvard University Press, 2001).