China has become known as factory to the world – as manufacturers invested in factories to take advantage of a labor force that accepts low wages and a government with minimal environmental standards and even less enforcement. Shoppers like low prices while the companies enjoy immense profits. China, indeed the entire world, pays a heavy price for manufacturing firms gathering in a place with such lax enforcement: Annual costs of pollution exceed $100 billion, refugees must leave damaged villages and farms, and toxic air and water spill far beyond China’s borders, explain author Alexandra Harney in the second article of this series that addresses China’s post-Olympics goals. Some multinational firms maintain high standards, but many others are secretive about suppliers and press for ever-lower prices and protections. Harney concludes that companies and consumers around the globe, along with China, must take responsibility for protecting the environment and take some serious and immediate steps to stop regarding “ever-cheaper products as a fundamental human right.” – YaleGlobal 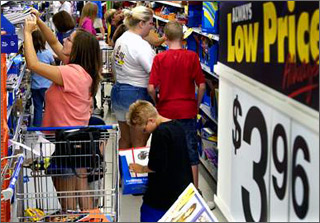 Low price? Demanding cheap goods, shoppers get more than they bargain for,

encouraging dangerous pollution in China that spreads to other nations

HONG KONG: Beijing may have delivered its best air quality in a decade for the Olympic Games last month, but many Chinese in other parts of the country continued to live under a canopy of haze, breathing air that prompted American athletes to arrive wearing face masks.

Before critics in the West point fingers at China for soiling itself, they should consider their own role in contributing to the problem. Western consumers and companies enjoy the benefits of China’s polluting factories every day, and must bear more of the responsibility for helping these plants clean up.

The products the West buys from China are cheap in part because they do not include the full costs of environmentally-safe production. To keep costs down and enhance its competitive advantage, China has chosen to selectively enforce its environmental laws. 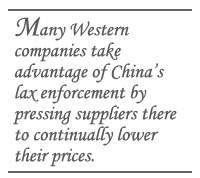 While Western companies generally follow the law at their wholly-owned facilities, many take advantage of China’s lax enforcement by pressing suppliers there to continually lower their prices. Companies provide few, if any, incentives to plant managers to behave responsibly. The West’s appetite for the $30 DVD player and the $3 T-shirt helps keep Chinese factories spewing toxic emissions into the air, pouring industrial waste into the waterways and damaging the health of employees.

China is paying a high price for its success as the world’s manufacturer. The costs of China’s outdoor air and water pollution now amount to $100 billion a year, according to the World Bank. Air pollution contributes to perhaps 750,000 deaths every year. Some 150 million Chinese farmers may eventually have to leave their land because of pollution and become “environmental refugees,” according to the country’s top environmental official. In 2005, there were almost 1,000 protests about environmental pollution every week in China.

Multinational companies play a direct role in exacerbating these problems, though the scale of their contribution is difficult to determine because most keep the identities of their thousands of suppliers a secret. The handful that do publicly disclose their suppliers, including Nike and Timberland, identify the factories by their English names, complicating the process of tracking them down in China.

But occasionally, this veil of secrecy is drawn back, and the connection between our shopping habits and China’s pollution becomes clear. In 2006, Chinese authorities fined a Hong Kong-owned textile manufacturer that counted Target, JCPenney and Land’s End among its customers, for dumping 22,000 tons of contaminated water into the Mao Zhou River. 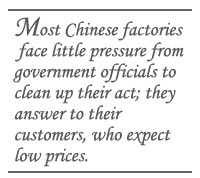 Factory managers, who must work and live in a cloud of smog and next to black rivers, know that their neglect of environmental laws comes at a price. In the case of Fountain Set, the Hong Kong-owned textile maker, officials said the factory had created fake records to conceal its illicit effluent. But few managers think much beyond the next order. They ignore the larger, longer-term consequences of their behavior.

That’s because most Chinese factories face little pressure from government officials to clean up their act. They answer to their customers, including multinationals, who expect low prices and high quality and rarely bother to check whether their suppliers are known polluters. One sourcing executive at a large American computer brand complained to me that on her visits to factories in China, the air was almost unbearable. It never occurred to her that her suppliers might have something to do with the choking air. As a senior official at China’s health ministry told me, foreign companies “brought dangerous work and pollution and left with the profits.”

We are just starting to get a whiff of the deleterious effects of the West’s pursuit of ever-cheaper goods. Scientists at NASA and other organizations have tracked the movement of pollution from China to the West Coast of the United States. Both Japan and South Korea suffer from acid rain as a result of China’s coal-fired power plants.

Most of the time, though, shoppers in the West select their bargains in happy ignorance of the consequences. More than a decade after activists targeted Nike for buying from sweatshops, most companies tell us nothing about the environmental impact of their international sourcing. And why should they bother? None of us seem to care.

If we’re concerned about the health of our planet and our children, we need to start caring. As consumers, we should insist that retailers tell us whether or not their foreign suppliers even attempt to follow the environmental laws in the countries where they operate and what they are doing to encourage factories to reduce emissions.

This wouldn’t be hard for multinationals to do. Most large retailers already inspect their foreign suppliers for violations of labor laws; a progressive few already evaluate suppliers’ environmental compliance. We might even ask companies to declare, through labels, at the checkout counter or online, the environmental impact of the goods they sell. With transparency comes greater responsibility. 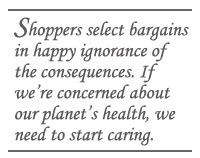 As they step up inspections, multinationals can draw on a growing body of information about Chinese factories’ environmental records. China’s state-controlled media report with increasing frequency on pollution. The Institute of Public and Environmental Affairs, a Chinese non-governmental organization, has created an online database of polluting companies in China, which contains more than 27,000 incidents of companies violating environmental rules.

Consumers and companies in the West should be prepared to spend more on goods from China as factories clean up their act, though better environmental policies do not always cost more money. Suppliers that lower their energy consumption, for example, will be more competitive. As commodity and fuel prices soar, the incentive to use material more efficiently will be greater than ever.

To be sure, multinationals are only part of the picture. China causes plenty of environmental damage without the West’s help. Many of China’s dirty factories supply the local market. The world’s most polluted city, Linfen in Shanxi province, is in the heart of China’s coal-producing region, not its coastal export factory zones. China’s heavy dependence on coal-fired power stations, its explosion in car ownership, and its rapid development of heavy industry have all contributed to continuing environmental disaster. 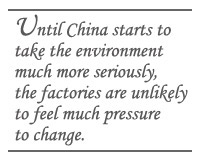 The Chinese government bears primary responsibility for turning this around. Until China starts to take the environment much more seriously – by preventing known polluters from reopening without cleaner processes, by raising price of electricity and water to encourage conservation, and by significantly increasing the penalties for violating environmental laws – the factories that make our goods are unlikely to feel much pressure to change.

Still, the environmentally aware must not ignore the irony of stuffing their Toyota Priuses full of products that help generate pollution strong enough to kill.

Globalization has allowed us to enjoy the benefits of people’s hard work across the world – by one conservative estimate, “made in China” goods save the average American family $500 a year. But by moving manufacturing to developing countries like China and counting ever-cheaper products as a fundamental human right, we lose sight of the environmental consequences of our addiction to cheap goods.

Alexandra Harney is the author of “The China Price: The True Cost of Chinese Competitive Advantage” (Penguin Press, 2008). Click here to read an excerpt.