Keeping North Korea from the Brink – Part I

Countries throughout the north Pacific recognize the grave danger of the North Korean nuclear program, but lack a coherent strategy for restraining it. This two-part series examines the specific concerns for US and China in containing the program – as well as proposals for a long-term resolution. Peter Beck, an analyst with the International Crisis Group in Seoul, notes that US economic interventions have done little to force Pyongyang back to the negotiating table. Instead, they only drive North Korea further into China’s orbit, adding to the deep and ongoing interdependence between the two nations. The closeness of the bilateral relationship was on display in February when Kim Jong Il toured China’s successful laboratory of reform – its special economic zones – and offered hints that his regime may consider reform for North Korea. Beijing is investing heavily in its northeastern provinces, which border North Korea, as well as providing most of that country’s consumer goods. North Korean acquisition of nuclear arms is not in China’s best interests, as it could push Japan or Taiwan into seeking atomic weaponry. Nevertheless, a pragmatic Beijing accepts that the weapons exist and draws the line at testing. China’s priority is stability in North Korea, since a collapse of Kim’s regime would send hundreds of thousands of refugees streaming into China and magnify tensions in Northeast Asia. Washington’s decision to play the sanctions card will probably not slow Pyongyang as long as North Korea retains close economic ties with China. Likewise, China will probably not bow to Washington’s demands that it play tough with the North Koreans on the nuclear question, since doing so would threaten its own interests in preserving the status quo. – YaleGlobal

Keeping North Korea from the Brink – Part I

US must recognize the limits of Beijing’s ability - and willingness - to pressure Pyongyang beyond a point
Peter Beck
Tuesday, February 14, 2006 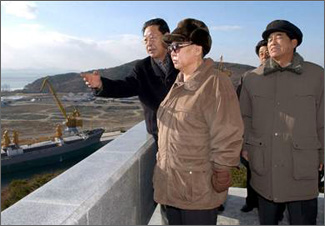 SEOUL: If the Bush administration had hopes that cracking down on North Korea’s illicit money laundering activities in Macao last fall would bring Pyongyang back to the nuclear negotiating table, Kim Jong Il dashed them once and for all with his field trip to China. Judging by North Korea’s shrill reaction, the sanctions did hit Pyongyang where it counts, but rather than making North Korea more acquiescent, the crackdown has pushed the nation further into China’s orbit. This makes China’s role more important than ever for resolving the nuclear standoff, and at the same time constrains Washington’s policy choices.

China’s relationship with North Korea is based on mutual economic necessity rather than political loyalty or shared ideology. Relations are nowhere near as close as the “lips and teeth” once proclaimed by Beijing. China’s pragmatic leaders have difficulty relating to their Stalinist counterparts in Pyongyang. The clothes worn by President Hu Jintao and Chairman Kim during their January tête-à-tête spoke volumes: The urbane technocrat in a $1,000 suit meets the recluse in a jumpsuit.

Chinese in regular contact with the North often quietly complain to interviewers with the International Crisis Group – an independent non-profit NGO that provides field-based analysis and advocacy to prevent deadly conflict – about the never-ending difficulties of working with the North. More than a few Chinese leaders feel Pyongyang is ungrateful for the sacrifices China has made since the Korean War, which alone took at least 500,000 thousand Chinese lives. There is not one public memorial in North Korea acknowledging China’s contributions, from food to fuel to arms. Some analysts even suggest that Beijing would be willing to abandon North Korea, if that would help in the quest to take Taiwan, and question whether China would come to Pyongyang’s defense if a second Korean war were to break out.

Beijing shares Washington’s goal of a nuclear-free North Korea, if for no other reason than to discourage a nuclear arms race in region, with arch enemies Japan and Taiwan then quickly trying to catch up. The problem is that Beijing places far greater priority on North Korean stability and regime survival than on the peninsula remaining nuclear-free. The cost of conflict or collapse in the North is too great for Beijing to consider putting serious pressure on Pyongyang, so long as Kim does not upset the status quo with an overly provocative act, such as a nuclear test or transfer of nuclear material to a third country. Thus, China is committed to the six-party nuclear talks as a means of keeping the lines of communication open and maintaining the status quo. Beijing is satisfied to play the role of convener and occasionally arbitrator, not dealmaker or enforcer. Achieving a nuclear accord is purely optional.

As Pyongyang’s economic ties with Japan and the US have atrophied, China and, to a lesser extent, South Korea have emerged as North Korea’s economic lifebuoys. However, unilateral assistance is quickly being replaced by trade. Chinese exports to North Korea rose more than 50% last year to break the US $1 billion level - comprising nearly half of the North’s imports. During several visits to the China-North Korea border, in both the east where most ethnic Koreans live and refugees hide and in the west where most trade takes place, ICG researchers observed trucks laden with rice and fuel entering the North and iron ore coming into China. Moreover, China has become a source of crucial infrastructure investment, including road and port facilities that would give China’s two landlocked northeastern provinces of Jilin and Heilongjang easy access to Japanese and South Korean markets. A wave of Chinese consumer goods is washing over North Korea, accounting for over 80% of such products in North Korean markets.

South Korean officials almost never admit it openly, but they are increasingly worried about Beijing’s growing economic influence over the North. North Korea watchers in Seoul are already referring to the North as “China’s fourth northeastern province.” Given that China has released a development plan to reinvigorate this region, such concerns are well founded. Speculation is no longer whether Chinese forces would enter North Korea in the event of Kim’s regime collapsing, but how much territory they would try to hold if it did. 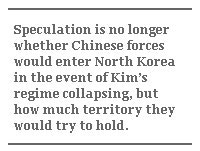 Chairman Kim’s fifth and longest trip to China focused on the wellspring of China’s economic reforms, giving rise to hopes in South Korea that the visit portends deeper economic reforms and opening. Given reports of banners in the North proclaiming the success of Kim’s trip to China and the extensive coverage his trip received on North Korean TV during the Lunar New Year, it is reasonable to conclude Pyongyang is committed to reform and opening its closed economy more than ever. But whether that will be enough to be successful remains an open question.

With the dramatic flair of the armchair movie director he professes to be, Kim saved the most crucial part of his China trip for the very end: his meeting with President Hu. China currently holds the biggest potential carrot and stick with the North. The carrot is the $2 billion economic assistance package rumored to be offered by Hu during his visit to Pyongyang last October. The stick is in the form of American pressure to crack down on the North’s remaining banking activities in China. 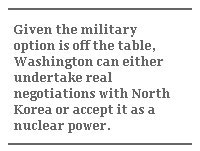 However, China opposes sanctions on North Korea because it anticipates they would lead to instability and, while they would not dislodge the regime, would damage the nascent process of market reforms and harm the most vulnerable segment of the population. China’s opposition to aid conditionality and infringements on sovereignty, as well as its general reluctance to embrace sanctions, is related to its own quest for reunification with Taiwan – not to mention human rights issues in Xinjiang and Tibet, and its own economic interests in Sudan and elsewhere..

Washington must face the fact that there is virtually no circumstance under which China would use its economic leverage to force North Korea’s compliance on the nuclear issue. Even though the crackdown on North Korea’s illicit banking activities in Macao demonstrated that China is not completely immune to outside pressures to rein in bad behavior, Beijing is unlikely to shut down the North’s remaining banking activities.

Given the military option is essentially off the table, Washington can either sit down and undertake real negotiations with North Korea, or accept it as a nuclear power. Waiting for China to compel North Korean compliance will only give Pyongyang more time to develop its nuclear arsenal.

Until Beijing, Washington and Seoul can agree on common goals and strategies for dealing with North Korea, the best we can hope for in the short term is to go though the motions of negotiations. For now, perhaps the only goal all parties can agree on is avoiding a crisis, but more meaningful engagement is needed if, in the long run, North Korea is not to loom as a flash point in Sino-US relations.

Peter Beck is the Northeast Asia Project Director for the International Crisis Group. The project’s latest report – China and North Korea: Comrades Forever? – can be viewed at www.crisisgroup.org.