Knock, Knock…Who’s There? Many Migrants!

All people have the right to leave their country, writes Joseph Chamie, Director of the United Nations Population Division, but they do not have the right to enter another without permission. As population growth soars in the developing world, this apparent contradiction is creating a dilemma for developed countries, which are being inundated with illegal migrants. According to Chamie, the imbalance between supply and demand of migrants has immense social, economic, and political consequences. Ostensibly, he suggests, the developed world, much of which has an aging population and may soon face population decline, should welcome these migrants as a solution to future job shortages and pending budgetary crises as their populations retire and demand pensions and benefits. But Chamie also notes that while government officials may see benefits to increased immigration, the general population often views newcomers as a threat to jobs and cultural integrity. In the wake of September 11, these prejudices and concerns are increasingly being paired with more restrictive immigration policies, Chamie says. Despite these pervasive trends, however, there is little consensus on the national or international level regarding how to handle the situation. As the flow of migrants shows no sign of abating, Chamie concludes, the world must sit down to work on bilateral and regional agreements and create realistic, viable policies. - YaleGlobal

Knock, Knock…Who's There? Many Migrants! 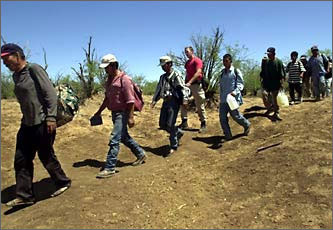 This apparent contradiction is precisely the dilemma that increasing numbers of nations and regions are facing. In short, the supply of potential migrants, who are free to leave their homelands, simply exceeds the demand for migrants, which is set by the receiving countries. Consequently, large numbers of people are knocking on the door. They are desperately attempting to leave their homelands and are entering other countries by foot, in cars and trucks, flimsy boats, cargo containers, freight trains, or even in the wheel compartments of aircraft. Moreover, permitting migrants to enter legally, i.e., through the front door, does not appear to reduce significantly the number choosing to enter illegally, i.e., through the back door.

The imbalance between the demand and supply of migrants - several million versus one to two billion - and the consequent increasing flows have had serious social, economic, and political repercussions. As a result, international migration has moved to the forefront of national and international agendas, becoming a major issue of concern for an increasing number of developed and developing countries. At the same time, the implementation of national policies and programs to better manage international migration has also intensified, spreading to all regions of the world. More recently, in the aftermath of the events of September 11, 2001, many countries have further tightened their borders and stiffened their policies.

While many diverse forces are at play, some noteworthy developments are adding new urgency to international migration on the national and international scene.

First, and perhaps foremost, is the demographic dimension, with receiving countries facing a "birth rate crisis" and sending countries continuing to grow, many at very high rates. The birth rate crisis in Europe, Japan and elsewhere is expected to lead to labour shortages. With more deaths than births, such countries are experiencing population aging and will be facing population decline in the near future.

For these countries, domestic demographic change requires objective, thorough, and comprehensive reassessments of many established economic, social and political policies and programs. In addition to immigration policies, governments need to reassess retirement ages, labor force participation, levels of contributions of workers to retirement and health-care schemes, and benefits for the elderly.

On the other side of the demographic coin, the populations of sending countries, especially in Asia and Africa, continue to grow relatively rapidly. Virtually all of world population growth is taking place in the less developed regions, with six countries accounting for nearly half of the world's growth - India, China, Pakistan, Nigeria, Bangladesh, and Indonesia. In many of these countries, those in the working ages, especially the youth, face difficulties finding gainful employment. And even among those who are employed, a good number are seeking opportunities in the wealthier receiving countries, especially in Europe and North America.

Second, in contrast to the more distant past, the composition of the immigrants in many instances differs greatly from that of the receiving country. In Europe following World War II, for example, many immigrants came from the relatively poorer countries of the southern Europe. Many of the immigrants today, however, are not only less educated and lower skilled than the native population, but are ethnically and culturally very different from the native population, raising concerns about cultural integrity, integration, and assimilation. 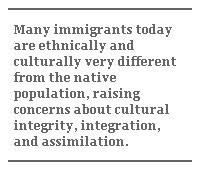 Third, immigration has recently become a central issue in the elections and politics of many receiving countries, especially in Europe. The successes of some of the parties of the right have been linked to their opposition towards immigration. Although the numbers of migrants in these communities are relatively small, they have increased noticeably over the last few decades. In Austria, Denmark and the Netherlands, the proportion of immigrants has increased several-fold since the 1970s. In addition, the continuing flows of illegal migrants have led some governments to propose drastic actions. Côte d'Ivoire and Malaysia, for example, have repatriated or expelled many of their immigrants, both legal and illegal. And in July 2002, the Prime Ministers of Spain and the UK proposed that the European Union withdraw its aid to those countries that did not take effective steps to stem the flow of illegal emigrants to the EU; the proposal, however, was defeated.

Fourth, the events of September 11, 2001 in New York City, Washington, D.C. and elsewhere have heightened security concerns relating to international migrants and are greatly influencing international migration policies and programs. Since the terrorist attacks, the United States government is reported to have arrested hundreds of Muslim and Arab men and charged them with immigration violations that rarely caught the attention of federal officials before. Other governments are instituting new procedures, e.g., photos and fingerprints, to monitor those coming from certain countries. Also, some critics, including several former immigration officials, say they fear that policies governing asylum are being weakened in a move to treat immigration as more of a national security issue than a social and demographic one. 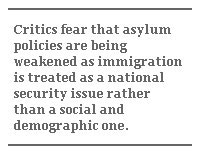 Moreover, the challenges and controversies relating to international migration are not limited simply to countries or regions; within countries, differences regarding how to deal with international migration are becoming more pronounced and serious between various groups. While many business leaders and some governments see immigration as a partial solution to addressing the consequences of declining and aging populations, the general public appears less willing to accept the arrival of immigrants. The public often views immigrants as threatening employment conditions and opportunities, raising crime, contributing to declines in public education and profiteering from entitlements to social services. Governments have been frequently ill prepared to address this growing gap between national needs and public reactions.

And what about the knocking on the door? Based on the current state of global trends and likely future international action (or inaction), it seems highly improbable that the knocking - and the flow of migrants - will stop any time soon.

Joseph Chamie is Director of the United Nations Population Division.