Japan's Prime Minister Junichiro Koizumi won a huge mandate in last Sunday's elections, but for reasons that differ from many commentators' suggestions. By calling the elections following the rejection of his post-office privatization bill, Koizumi artfully framed the debate as between the pro-reform Liberal Democratic Party (LDP) and his anti-reform opponents. But while domestic reform dominated the campaign rhetoric, the referendum was really on Koizumi himself, writes Yoichi Funabashi. The prime minister's brash leadership style – a sharp contrast to his predecessors' – has appealed to many admirers who resent the audacity of China's lectures on Japanese wartime history and gunboat diplomacy. China's explosive growth and political stridency will only continue to embolden Koizumi's nationalist policies. "The danger ahead," writes Funabashi, "is the momentum that an increasingly strong, bold, nationalistic premier would add to what seems like an increasingly possible collision course between China and Japan as they vie for the spot of East Asia's preeminent power." – YaleGlobal 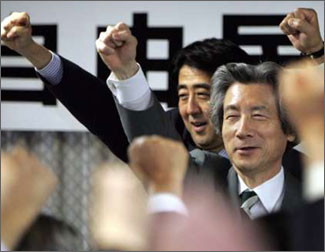 Japan finds itself in the midst of a growing national crisis, and Koizumi's overwhelming victory is fundamentally based on what the public perceives as his leadership style, not his platform. As part of his appeal stems from the strong stand he has taken with China, his landslide victory may not bode well for increasingly acrimonious relations between Asia's two giants.

Koizumi, often sporting pastel shirts without a tie during the 12-day campaign, brought more than just a new style to Japanese politics. More importantly, he brought a new sense of boldness, defiance, and strength, at a time when the public was craving change. Like him or hate him, most Japanese respect Koizumi's determination and many respond to his strong personal leadership and appeal.

Whereas previous Prime Ministers were more likely to be compared to "cold pizza," Koizumi reminded the public in the last month why they once waited for hours to buy a key chain with his face on it or hear him speak at a rally. When Koizumi was rising to power, he was greeted by excited yells of "Jun-chan," as the electorate seemed to view him as a rock star. In this election, however, he was greeted by excited yet more deferential yells of "Koizumi-saan," a subtle reflection of the respect he has gained and increasingly commands. Since coming to power, Koizumi's image has changed from a sub-cultural to cultural phenomenon, having evolved in response to the demands of an electorate yearning for stronger, decisive leadership and Japanese identity and style in a period of increasing challenges.

Curiously enough, foreign policy was almost totally absent from the pre-election debate. Some may perceive this as a sign that Japan is growing increasingly inward-looking, as Koizumi simply wanted to limit the agenda to the single domestic issue of postal privatization. However, this reading would be wrong. Although very difficult to detect since it was discreetly under the radar, I would nevertheless contend that the China factor was actually one of the largest issues in this election, as more than any other factor, a rising China and its direct challenge to Japan set the context for the debate.

It is almost unthinkable to envision such a large LDP victory without considering the violent anti-Japanese demonstrations that swept through China last summer and spring or Beijing's visible effort to block Japan's bid for a permanent UN Security Council seat. Koizumi has been seen as "standing tall" against China, as he has postured himself as a kizen, or fearless, leader. Although moderate and liberal Japanese – and even the majority of LDP supporters – express their opposition to and reservations about Koizumi's continuous and contentious Yasukuni shrine visits, Japanese across the political spectrum resent what they perceive as the audacity of China's lectures on history and its gunboat diplomacy in the East China Sea.

For the past several months, China has subjected Japan to public protests and lecture about admitting the historical truth about Japan's wartime atrocities. Just as Japan was gearing up to go to the polls, the Chinese navy dispatched five warships to the disputed area in the East China Sea, where a Japanese oil company was planning to drill for gas.

China's growth as an economic hub has been a mixed blessing for Japan, as much of Japan's recent economic recovery rests squarely on the China boom, and yet the stronger China becomes economically, the more it will be able to transfer economic might into political and military clout. Japanese realize this, and therefore accept the need to change their economy and raise their competitiveness. They are aware that vested interests and a burgeoning deficit have been bleeding Japan's vitality, and in order to deal with increasingly cut-throat competition with China, reform really is necessary, although it's still unclear just how much Japanese are willing to pay for what level of reform.

Koizumi's landslide victory may in time prove to be the last gasp of the LDP, as the public likely holds unrealistic expectations of how much Koizumi will be able to accomplish before he steps down next September. Koizumi has been reaffirmed with a massive wave of popular support, but has not yet addressed what he plans to focus on following his single issue of concern: postal privatization. Agenda setting will be one of the most critical developments in Japan over the next year, as Koizumi will have to choose between an increased focus on domestic policy – the Japanese public debt has risen to 160 percent of GDP – or foreign policy, as relations with East Asian neighbors continue to worsen.

Furthermore, although Koizumi is now deciding how to use the political capital he has gained from such an overwhelming popular mandate, an effective transformation of this perceived political capital may prove to be elusive. Especially due to Koizumi's strategy of appealing to metropolitan centers, young voters, and females, he has planted the seeds of a shift in the main LDP constituency base, but has in no way cemented it. The new voters Koizumi courted at great lengths will not likely demonstrate the same loyalty as the LDP's old, pork-barrel politics-stuffed rural political base. This factor is important – and worrisome – because in order for the LDP to maintain its appeal to the whimsical and floating metropolitan voters it will need, it is likely that its leaders will increasingly feel pressured to raise the stakes of what a bold, style-oriented leader must be.

A wise leader knows how to translate nationalism into reform, as Margaret Thatcher did, to some extent, in the wake of the British victory over Argentina in the Falkland Islands. Whereas Thatcher skillfully exploited that nationalistic sentiment and channeled it into a reform agenda, in Japan's case, the reverse may prove to be true, as Japanese leaders may unwisely attempt to channel popular support for a reform agenda into nationalistic sentiment. China, unfortunately, may continue to embolden this type of pro-nationalistic leadership style in Tokyo, as Japan seems to be an ostensible exception to Beijing's peaceful rise strategy.

The danger ahead, then, is the momentum that an increasingly strong, bold, nationalistic premier would add to what seems like an increasingly possible collision course between China and Japan as they vie for the spot of East Asia's preeminent power. Despite increasing economic interdependence, Japan and China seem to be driven more by passion and animus than economic rationality. Status, prestige, and pride are proving dangerous bedfellows for two nations consecutively vying for more regional predominance and maritime control. Although the inevitability of such a collision is far from assured, the months and years ahead will prove to be formative ones not only on Japan's domestic political culture, but on the implications for East Asian stability, as well.

Yoichi Funabashi is a columnist and chief diplomatic correspondent for the Asahi Shimbun. He is currently a visiting scholar at the Brookings Institution.