After World War II, Kosovo became a province of Serbia in the Socialist Federal Republic of Yugoslavia. Kosovo, with its majority of ethnic Albanians, enjoyed near-autonomy until 1989 and the oppressive rule of Slobodan Milosevic. The Albanians resisted throughout the 1990s, atrocities ensued, leading finally to intervention by the North Atlantic Treaty Organization in 1999. Yugoslavia splintered, and Kosovo has since remained an international protectorate of the UN, with an international force in place. Citizens in that part of the world have split into two camps, reminiscent of the Cold War era – Serbs are divided about Russian ties and Kosovars lean towards independence, assuming US support. A declaration of independence from Kosovo could bring to the surface the many differences between Russia and the West. Ethnic groups seeking independence – including Kurds in northern Iraq, Palestinians in the Middle East and Albanians in Kosovo – cannot count on a distracted and overloaded US for support. BBC journalist Humphrey Hawksley argues that Kosovo’s quest for independence might not be a good idea, considering that both it and Serbia aspire to join the European Union. He points out that nations with ethnic diversity can cooperate on trade and politics, pursuing economic success rather than trying to resolve ancient grudges. Good governance, Hawksley concludes, is a more practical goal than sovereignty. – YaleGlobal

By avoiding empty sovereignty, Kosovo could lay down the foundation for its prosperity
Humphrey Hawksley
Monday, November 5, 2007 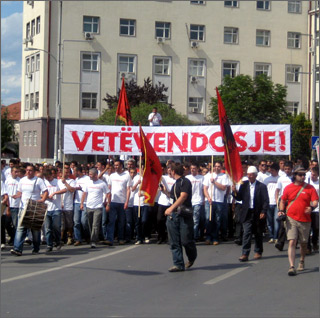 Cry for self-determination: The demand for independence could slide Kosovo into a conflict with Serbia and Russia, eventually involving the West. (Photo: Wikimedia Foundation, Inc)

PRISTINA: It’s almost nine years since NATO air strikes freed Kosovar Albanians from Serbian control, yet the official status of the province is still undecided. A deadline of December 10, 2007, has been set for the diplomatic process to deliver. It’s expected to fail, after which Kosovo’s semi-autonomous government says it will make a unilateral declaration of independence.

While Kosovo was a defining issue of post-Cold War leadership, there is now a gaping silence from all global powers – except Russia - as to an acceptable way forward. Kosovo’s 2 million citizens interpret this as a signal that the United States and much of Europe would support its independence.

Kosovo, therefore, is in danger of falling victim to the type of opaque diplomacy that has been behind some of the gravest global conflicts. One of the more recent is Saddam Hussein’s belief that the US would not object to Iraq’s 1990 invasion of Kuwait. Another is the initial tepid US reaction to the northern Iraq–based Kurdish insurgency against Turkey, leading to the current crisis, in which Turkish and US troops could face each other from opposite sides of a frontline.

Too much is at stake for international policy to be misread again.

The West must declare clearly what it will or will not do if independence is declared, and it must avoid enveloping Kosovo in a Cold War-style clash with Russia.

Since the 1999 North Atlantic Treaty Organization intervention, the United Nations has administered Kosovo. Stability remains underwritten by a 16,000-strong international force, and apart from an upsurge of anti-Serb unrest in 2004 and sporadic ethnic attacks, Kosovo is seen as an intervention success story.

In January this year, UN Special Envoy Martti Ahtisaari put forward proposals that would allow Kosovo its official separation from Serbia. He deliberately avoided using inflammatory words such as “independence” and “sovereignty.” The new nation would be authoritatively monitored by the European Union and the international military force would stay. In many respects, it would be similar to the status quo.

Serbia rejected the proposals, saying it would never accept Kosovo’s separation, and, in September, Russia gave its full support, announcing that it was drawing a “red line” on the issue of Kosovo.

Kosovars argue that they need independence to move on and build a modern European nation. For example, official status would attract investment and lower interest rates. 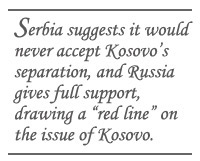 Serbia insists that it should not be punished for the atrocities of a former dictator. The brutality of the 1990s was carried out under the regime of Slobodan Milosevic who was overthrown by the Serbian people. Serbia is now a European democracy and the issue should end there.

Russia’s blunt red-line declaration, however, has taken Kosovo's status to a higher level. What began as a humanitarian mission to stop ethnic cleansing has become part of a new balance of power in Europe. Kosovo’s future is linked to the Czech and Polish missile defense-shield dispute, energy supplies, and a basket of issues on which a revitalized Kremlin tests the will of the EU and the US.

Should Kosovo declare independence, it would almost certainly not be recognized by the UN because of a veto by Russia in the Security Council. The EU is unlikely to accept Kosovo’s independence because of opposition from governments in Greece, Cyprus, Romania and others. Without UN or EU recognition, the new Kosovo might have less legitimacy than the present one.

Opinion polls have found that more and more Serbs now mull about where their long-term future lies. At present, they are split 50-50 between Russia and the EU. But, increasingly, Moscow is seen to be delivering more than Brussels, particularly by way of security and a sense of belonging.

“Russia and Serbia are almost the same nation,” said a resident in the town of Kurshumliza, close to the Kosovo border. “And Russia is heavily armed and a big power. It will help us.”

A new illegal Serb militia group is reported to be mobilizing to protect Kosovo’s 100,000 Serbs should independence be declared. It calls itself Tsar Lazar after the hero of an epic Serbian poem about reclaiming Kosovo. In Kosovo itself, the banned Albanian National Army recruits members to fight Serb militia. What’s new in this familiar Pavlovian Balkan sprint towards the Kalashnikov is that one of these insurgent groups believes their ultimate backer is Moscow, and the other Washington.

“Russia and all those who believe we belong under Serbian rule are our enemies,” said an Albanian National Army member, wearing a Balaclava helmet to protect his identity. Like his Serb counterparts, his nom de guerre was Kacak after a legendary Albanian fighter.

“We consider the United States as our biggest friend and ally,” he said.

A replica of the Statue of Liberty has become a landmark in the Kosovo capital, Pristina, and an image of Bill Clinton covers the outer wall of a city-center building. As a mainly Muslim society, liberated by US weapons, Kosovo holds much symbolism for the United States. It is little wonder then that Kosovars are convinced of Washington's continuing loyalty.

If Kosovo declares independence, it will create another European issue that pits the West against Russia and it may split the EU. If it doesn't, the disappointment of many Kosovars could lead to instability.

The bilateral recognition of Kosovo by Washington and key European governments may also encourage more ethnic communities to lodge their own applications for independence: Chechnya in Russia and Xinjiang in China come to mind as well as the Tamil areas in Sri Lanka, where an unfinished war of independence has been running since 1983.

If the views on either side of the Kosovo-Serbian border are any indication, a dangerous Cold War polarity is returning, with communities banking their future on the patronage of a bigger global power and not on ability to administer and trade.

Ironically though, both Kosovo and Serbia are embryonic democracies, with an immediate goal to join the EU. That alone would make sovereignty increasingly irrelevant.

Kosovo’s argument that it cannot clear the litter and fix the roads without independence is nonsense. It is, in essence, facing the choice of whether it wants to resemble the bloodied Palestinian territories or glittering Taiwan.

While the Palestinians remain mired with land rights and grievances, Taiwan, with no official status at all, has become a global economy, raising the question that if Taiwan can carry on with its ambiguous status, why can’t Kosovo?

Serbia, too, must decide on whether it wants to end up as a client state of an authoritarian Russia or sign on to the democratic values entrenched within the European Union. A quick look at the hospitals of Brussels compared to those of Moscow might hint which system the average Serb parents would trust to care for their children. 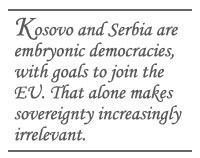 It is time for politicians in both Serbia and Kosovo to lead their people away from the contentious issue of independence. Ahtisaari has already provided details of how the area can be managed and funded for the next decade or so. The West must also send an unequivocal message that the way forward is to deliver not nationalistic symbolism but good governance.

The legitimacy of both Serbia and Kosovo will come not from their ability to protect historical legends, but to provide health, education, employment and a thriving economy for their citizens.

Humphrey Hawksley, author of “The History Book,” is a BBC correspondent whose reports on Serbia and Kosovo can be seen on BBC World on November 7th and 8th and will be posted on the BBC website.