Kyrgyz Ruler Is Toppled, but Can the Center Hold?

The flight of the president of Kyrgyzstan, facing angry demonstrators, has suddenly thrust the small Central Asian republic into the international limelight. But as regional expert Paula R. Newberg notes, the overthrow of President Askar Akaev was a long time coming, and may have serious repercussions in the neighborhood. As Newberg warns, Kyrgyzstan's more conservative authoritarian neighbors – Uzbekistan, Tajikistan, Kazakhstan, and Turkmenistan – may take its example to heart: "With visions of toppling dominoes in mind, all are now likely to treat opposition severely." Further, with both Russian and US military presence, and Chinese interest in a conduit for natural resource transportation, many eyes are on Kyrgyz political situation. "The revolt demonstrated that authoritarianism is untenable in the long term," she says, "but it failed to clarify a path toward successful governance." Many interested observers, whose strategic and economic interests are at stake, await the outcome – a veritable challenge for a perennially weak state in a potentially volatile region. – YaleGlobal

Kyrgyz Ruler Is Toppled, but Can the Center Hold?

A resource-poor country amidst oil-rich autocracies has a challenge to sustain its newly won democracy
Paula R. Newberg
Monday, March 28, 2005 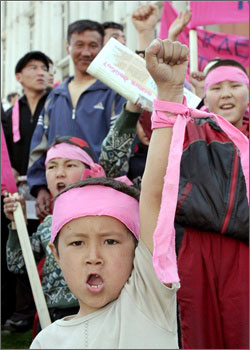 Pink revolution: Demonstrators in Bishkek celebrate the fall of a democrat-turned autocrat, but the future is not rosy. (Photo: Reuters)

WASHINGTON: The only truly surprising thing about the fall of Kyrgyzstan's government last week was its speed. Although it has long advertised itself as an island of freedom in a sea of Central Asian autocracies, the country has been backsliding for almost a decade. Pent up demand for economic change, alienation from corrupt power holders, and the increasing hardships of poverty combined to create a political tinderbox that needed only one spark to ignite. By manipulating parliamentary elections eariier this month, President Askar Akaev ended his own rule and raised serious questions about Central Asia future stability.

Kyrgyzstan's anti-government revolt follows others in the former Soviet Union – Ukraine and Georgia were models, of a sort, for last week's uprising – but it is the first in fragile and potentially volatile Central Asia. China is across the eastern border, Afghanistan and Pakistan are only miles down the road, and Russia maintains an extensive presence in the region. The authoritarianism that defines Central Asia's governance has left its political future quite uncertain. Akaev's government was considered liberal in comparison to Karimov's Uzbekistan, Rahmonov's Tajikistan, Nazarbayev's Kazakhstan, and Niyazov's Turkmenistan. With visions of toppling dominoes in mind, all are now likely to treat opposition severely.

Last week's predictable, if unplanned, revolt demonstrated that authoritarianism is untenable in the long term, but it failed to clarify a path toward successful governance. As Akaev fled to Russia, a collection of old and new politicians and opposition leaders is running a rump government, and new elections have been announced for the late spring.

For more than a decade, Akaev was a master political puppeteer. He centralized power but offered the appearance of broad political participation – until he was challenged. A relatively free press, political parties, and nongovernmental organizations were all allowed – but only to a point. Unlike neighboring Uzbekistan, where almost no expression is free, Kyrgyz could read and write, learn about the outside world, and sadly, understand the limits of their economy and ambitions.

Although Akaev's abuse of authority is the proximate cause of Kyrygyzstan's current political crisis, Kyrgyzstan's problems run much deeper – and raise questions about the viability of the independent states that emerged when the Soviet Union dissolved. A small, land-locked, agrarian and mountainous country without visible means to support itself, the Kyrygz Republic prospered during the Soviet era. Moscow subsidized its highly educated citizens to ensure stability along the Sino-Soviet border. Following independence, Akaev plied a paper trail toward financial reform, but he could not build an economy on rules alone. Unlike its larger neighbors, all endowed with abundant, extractable natural resources, Kyrgyzstan and neighboring Tajikistan have few people, markets, or products to sell. Although small urban centers boast restaurants and internet cafes, they belie a more pervasive poverty.

Among multi-ethnic Kyrgyzstan's crossroads, militant groups have lived among its border regions, and nearby Afghanistan's conflicts have occasionally spilled over into local Kyrgyz society. The complex politics of the Fergana valley – a fertile corridor where anti-government fighters have found haven during the Tajik and Afghan civil wars, and suffered repression under Uzbekistan's harsh rule – have provoked armed resistance from the Kyrygz state. Kyrgyzstan's one significant brush with terrorism, in the southern region of Batken in 1999, was relatively contained. But Akaev later claimed that foreign militants operating in Kyrgyzstan's south repeatedly compromised the country's security. Despite Akaev's claims that Kyrgyz security is weak, local alienation is far more pervasive than imported ideology, and does not justify the government's ruthless tactics.

Indeed, for many Kyrgyz in the country's south, criminality stemming from narcotics trading has posed at least as great a threat as cross-border terrorism. For most, including the unemployed half of the population, unrest simmers because opportunity is absent.

To counter a weak indigenous economy, Kyrgyzstan looked abroad. Recognizing that neither East nor West had yet found a role for Central Asia, Akaev spent Kyrgyzstan's first independent decade playing them off one another. All the while, he solicited investment from China to augment Russia's familiar patronage. In an effort to promote trade, the government joined the World Trade Organization and sought support for a Central Asian common market.

In late 2001, conditions changed. Russia's former sphere of influence became a staging ground for the US-led anti-terrorism coalition, turning a small peripheral country into a central actor on the global stage. Shortly after 9/11, the United States set up a military base just outside the Kyrgyz capital, and Russia had already done so. Both will undoubtedly maintain their military presence, even with a change in Kyrgyz political leadership. China's interests have broadened, too. Its parochial concerns about instability among its Uighur nationalists in Xinjiang, near the Kyrgyz-China border, remain. (The pliant Kyrgyz never protested China's rough hand there.) But China also took advantage of the new security environment to explore opportunities for energy trade and investment in Central Asia.

Global attention seemed to spell opportunity – even if it came from fundamentally anti-democratic states. Akaev's ambitious development programs could only be fulfilled with unprecedented amounts of foreign investment, and the post-9/11 regional realignment meant that previously low investment might finally be reversed. Of course, Kyrgyzstan is a more likely conduit than a destination for profits. Highways from China to the Caspian oil basin would pass through Kyrgyzstan, and trickle down monies from bases would reach a few nearby localities. Only the possibility – far from a probability – of hydroelectric power exports to Afghanistan, Pakistan or China might provide a foundation for the Kyrgyz economy.

Had Akaev paired real democracy with these dreams of prosperity, Kyrgyz citizens might have accurately matched their expectations to the country's economic conditions. That, after all, should be a benefit of participatory politics. Instead, poverty increased across the country, and so did official avarice. While Akaev protected himself and his family with a raft of immunity laws, he denied dissenting politicians the chance to run for office, removed them from elected positions, mercilessly harassed them and their families, and on occasion, sent them to jail. Central Asia's democratic dream dissolved into a civil rights nightmare.

To stem the rising tide of political vitriol, the United States and the United Nations pressed Akaev to leave office at the end his term. Because his assent was provisional their top-down strategy left a strategic vacuum as candidates gauged their chances of running with him, or against him. A lighter touch might have given everyone some maneuvering room. By overplaying his hand and then refusing to bargain, Akaev lost everything.

Even as it sorts out its inevitable differences, the interim Kyrgyz government has invited Akaev to return home from Russia exile, with his cherished immunity intact. Its reasons are clear. Before a future government can confront Kyrgyzstan's structural poverty – and the possibility that it cannot be fixed – it must address two important constituencies: first, the populists whose revolt brought it to power, and second, all those inside and outside the country who can help to sustain local and regional security. No Kyrgyz government can afford to frighten the monied autocrats next door in Kazakhstan, Uzbekistan, and China. And none can offend Akaev's former opponents or patrons – at least, not yet. That's what it means to hold the center in Central Asia today.

Paula R. Newberg is a Guest Scholar at the Brookings Institution.