Laos Steps into the Globalized World

Laos’ hosting of the Southeast Asian Games is in some way a metaphor for the country’s entrance into the globalized world. And Laos has crossed that threshold holding China’s hand, according to journalist Bertil Lintner. As a land-locked country, Laos decided to become “land-linked” to China. In other words, the constraints of geo-politics meant Vientiane had two choices: wallow in isolation or depend on a powerful ally to break into the world. And depending on China has had its benefits. Laos has received significant investment from Beijing both for infrastructure and to link the country to its neighbors. China is providing funding for a fourth bridge across the Mekong River connecting it to Southeast Asian neighbors. On the other hand, Beijing gains access to Laos’ all important natural resources and another, albeit small, market for its goods as well as the chance to further its influence in Southeast Asia. Of course, China’s growing profile is not unchallenged. Vietnam, a long-time ally of Laos and a rival of China is stepping up its presence too. But competition, rather than conflict, with Laos the winner, has been the most common response. Of late, Laos pledged its undying friendship to China. That’s a long time, but it’s working for Vientiane at the moment. – YaleGlobal

Laos Steps into the Globalized World

VIENTIANE: The slow emergence of Laos, once the backwater of French Indochina, since the end of the Vietnam War has got a huge new boost. Supported largely by China, Laos is getting ready to host a major international event and integrate more closely with the regional economy. Billboard-sized posters about the Southeast Asian Games that now dot the once-sleepy town, internet cafes and cell phone towers all serve to show that Laos has joined the globalized world For Laos this world begins with China; but for Beijing, Laos is yet another step in its rising power.

The Southeast Asian Games, which bring together the eleven countries in the region for a biannual sporting event, may not be the Olympics or the World Cup in football. But land-locked Laos, long considered one of the world’s poorest countries, is gearing up for the event with pride and enthusiasm. And the latest preparations for the Games top the usually dreary bulletins of the Lao News Agency, a state-run institution in this still communist nation in Southeast Asia.

The Games also come at a time when Laos more than ever before is engaging the outside world in business and development. The World Bank stated in a report this year that Laos, “is weathering the global financial crisis better than many of its neighbors.” Although GDP growth is expected to be 5 percent this year, down from 7 percent in 2008, it is still an impressive performance. Exports of electricity to power-hungry countries in the region, mining – and now tourism – are the engines behind this growth. New buildings are going up in Vientiane and elsewhere, and previously pot-holed, dusty roads have been spruced up. The internet and mobile phones are no longer novelties.

But all this has come at a price. A foreign observer once described Laos not as a “land-locked but a land-linked country” with different economic, political and cultural influences coming in from all directions. In a 1982 report, the Washington-based monthly Indochina Issues said that “Laos’s strategic location, coupled with its chaotic terrain, ethnic complexity and economic backwardness, has convinced Lao leaders that the country’s options are either chaos or dependency on a more powerful ally.” A generation later, that assessment remains true. And that ally is increasingly becoming China. 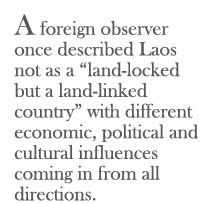 For China, Laos is attractive both for its natural resources and for its strategic location as a gateway to Southeast Asia. Although logging is supposedly strictly controlled by the authorities, recent visitors to the northern province of Phong Saly observed convoys of trucks with freshly felled timber crossing the border into China. In other northern areas, vast tracts of forest have been cut down to give way to rubber plantations geared toward the Chinese market. The Chinese have assisted Laos in road construction, hydroelectric power development, and mineral extraction. Moreover, China has paid for the construction of showcase buildings in the capital. The first was a huge “Cultural Center” in Vientiane – and now, hardly surprisingly, the stadium for the Southeast Asian Games.

Though China is not among the eleven countries competing in Vientiane, without Beijing’s assistance, the venue for the Games would not have been nearly as spectacular. Not wanting to be outdone, Laos’ old ally, Vietnam, decided to pay for the construction of the adjacent Athletes’ Village.

Part of the original deal with China was that as many as 50,000 Chinese workers and their families would be part of a “New City Development” scheme around the stadium. But, unusual for Laos where few dare to criticize official policies, this plan was met with opposition from even within the country’s National Assembly. It’s now going to be a much smaller “Chinatown”, but the trend is obvious. Newly-arrived Chinese migrants have set up shops and other businesses in Vientiane and elsewhere. 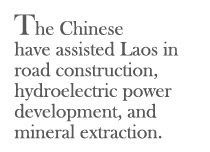 The changing nature of Laos’s international allegiances is perhaps best reflected in the history of three apartment blocks on the road to Vientiane’s Wattay airport. Completed in the 1960s to accommodate operatives of the US Central Intelligence Agency and other American advisers, the buildings were taken over by Soviet experts and technicians when the communist group Pathet Lao seized power in December 1975. Today, they are called the Mekong Hotel and Apartments and cater to a mainly Chinese clientele. One floor houses the Beijing Restaurant, with signs in Chinese, Lao and Roman script, and a Chinese-style nightclub with a karaoke bar. The road from the airport into the city is also lined with new company offices, shops and restaurants displaying the names of the establishments in Chinese characters.

In October, the links between China and Laos – and beyond – were cemented in an agreement to build a new fourth bridge across the Mekong River. This fourth bridge will span the Mekong River between the cities Ban Houei Xai in Laos and Chiang Khong in Thailand, replacing the existing, slow and cumbersome ferry connection between the two towns. A new, all-weather highway already connects Ban Houei Xai with Boten on Laos’s border with China. The new bridge will provide the first, direct road link between China and Southeast Asia.

Lao authorities expect that the 480-meter long bridge will be finished within 30 months to be paid for equally by Thailand and Laos. Laos’ share of the project will be paid with a grant of US$20 million from China. 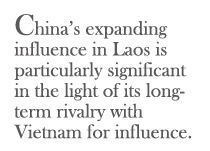 China’s expanding influence in Laos is particularly significant in the light of its long-term rivalry with Vietnam for influence. Since the early 1950s, when the Vietnamese Communist Party helped found the Pathet Lao, Hanoi had a dominating influence: North Vietnamese regular units fought alongside the Laotians they had trained to overthrow the US-backed Rightist government. Liberated zones under the Pathet Lao in turn provided valuable rear area and supply routes to south Vietnam. Vietnamese officials ran much of the administration during the French colonial era, which ended in 1953, and many stayed on as businessmen and private entrepreneurs. Newly arrived Vietnamese often have relatives in Mekong river-valley towns like Vientiane, and can more easily obtain local identification documents – and, after a while, citizenship. Vietnamese economic influence, and investment, is especially evident in the south.

But even there, cheap Chinese consumer goods abound in local markets, and it’s only a matter of time before China’s entrepreneurs become more firmly established there as well. A foothold in southern Laos would give China more direct access to Cambodia – another country that has moved closer to China in recent years – and comparatively prosperous urban areas in northeastern Thailand. But despite recent economic progress, Laos’ small population alone will never provide a sufficient volume of demand for Chinese goods that Beijing seeks.

On October 23, Chinese President Hu Jintao and his Laotian counterpart, Choummaly Sayasone, met in Beijing to reaffirm their cordial relationship. A member of the Lao delegation stated that Laos and China would strengthen their “comprehensive strategic partnership of cooperation,” and that “with joint efforts, Laos-China traditional friendship will last forever.” Although shrouded in traditional, communist rhetoric, the message was clear: China is in Laos to stay – well beyond the Asian Games. And, once completed, the soon-to-be-built, fourth bridge on the Mekong River could expand that influence and change the geopolitics of the region as well.

Bertil Lintner is a Swedish journalist based in Thailand and the author of several works on Asia, including “Blood Brothers: The Criminal Underworld of Asia” and “Great Leader, Dear Leader: Demystifying North Korea under the Kim Clan.” He can be reached at lintner@asiapacificms.com.