At Last, Justice Comes to Cambodia

Cambodia suffered years of hurt, from French and Japanese occupation to American invasion and massive bombing. The end of the US war in 1975 opened an even grislier chapter in Cambodia’s history. The rise of the Khmer Rouge led by Pol Pot brought unprecedented misery as the regime emptied cities, torturing and executing the educated, imposing extreme policies that led to starvation, disease and the death of 1.7 million Cambodians. Tragically, Cold War politics prevailed, with China recognizing the brutal regime and rejecting the Vietnamese-backed government that actually put an end to the killing, a calculation that allowed more chaos to ensue. Even though the new Cambodian regime agreed to put the surviving Khmer Rouge leaders on trial, political wrangling over sovereignty and international justice and funding difficulties delayed the process. On February 17, some 12 years after the idea of a special court was adopted, the UN-installed Extraordinary Chambers in Courts of Cambodia will begin a trial of perpetrators of the Cambodian massacre. Author and former UN official Benny Widyono argues that the trial must demonstrate forthright recognition that Cambodia was long denied justice by major powers. It is to be hoped that the long-awaited trial will begin the process of healing and national reconciliation that requires a full accounting of what went on, both inside the country and out. – YaleGlobal

At Last, Justice Comes to Cambodia 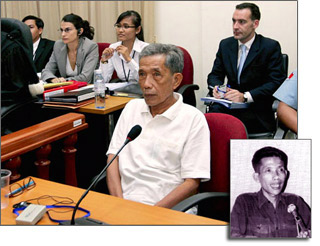 Justice delayed, but not denied: Kaing Guek Eav, alias Duch, once presided over

NEW YORK: Nearly 12 years after the UN initiative to bring to justice the perpetrators of the Cambodian genocide that took the lives of approximately 1.7 million people, the first preliminary hearing will be held in Phnom Penh on February 17. After years of talk and proclamations, but little action, Cambodians and people all over the world will watch how the justice is delivered.

The first person to be tried is Kaing Guek Eav, alias Duch, accused of crimes committed in the secret prison S-21 ( Tuol Sleng) S-24 (Prey Sar) and the killing ground of Choeung Ek., Four other defendants in prison awaiting the tribunal with him are four remaining top leaders still alive: Nuon Chea, now 82, the former second in command of the Khmer Rouge movement; former Foreign Minister Ieng Sary and his wife, Ieng Thirith; and former Minister of Social Affairs Khieu Samphan. Pol Pot, the former head of state and supreme leader of the movement, died 11 years ago. 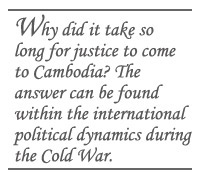 Why did it take so long for justice to come to Cambodia? The answer can be found within the international political dynamics during the Cold War and later in protracted negotiations between the Cambodian government and the UN for setting up the court. Because of the Cold War, a long period of international amnesia followed the Nuremberg and Tokyo trials after World War II. In 1993-94, this amnesia was broken when the UN established the International Criminal Tribunal for former Yugoslavia and Rwanda, and later by the establishment of the permanent International Criminal Court in 2002 to deal with serous human rights abuses worldwide.

In Cambodia, Cold War diplomatic maneuvers swept Khmer Rouge atrocities under the carpet. On 7 January, 1979, Vietnamese Army and Cambodian defectors from the Khmer Rouge ended the Khmer Rouge rule. The People’s Republic of Kampuchea, which soon gained control over 90 percent of the country, was established.

In a great irony, as the battle shifted to New York, the United Nations in a resolution spearheaded by the US and China, awarded Cambodia’s seat in the General Assembly to the exiled Khmer Rouge terror regime; the actual government in Phnom Penh that ended the killing was turned into an international pariah. This travesty continued for 11 more years thereby prolonging the suffering of the Cambodian people. Throughout the 1980s, bringing the Khmer Rouge criminals to court was far from the minds of the powers that be. The PRK did try Khmer Rouge leaders Pol Pot and Ieng Sary, but few in the outside world paid attention. 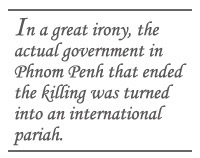 Finally, the international aspects of the Cambodian problem were settled with the elections sponsored by the United Nations in May 1993 and the establishment of a new government, a new Royal government of Cambodia headed by two prime ministers Prince Ranariddh and Hun Sen. In June 1997, following a strong suggestion by UN special representative on Human Rights in Cambodia Thomas Hammarberg, the co-premiers requested UN assistance to bring the Khmer Rouge to trial. A UN expert group recommended establishment of a hybrid tribunal such as that for Sierra Leone. However, the Cambodian government, which after violent clashes in July 1997, was headed by one prime minister, Hun Sen, who quickly rejected the idea and insisted on a Cambodian tribunal with international assistance.

One can only surmise that the government feared that some UN personalities, donor and human-right organizations would broaden the scope of the tribunal to favor adding more defendants, including senior ex-Khmer Rouge officials now serving in the government, while the Cambodian side insists that the trials should be limited to the five surviving top leaders. The Cambodian concern is on principle, not just numbers, as they fear that spreading the net would result in more instability. This proved to be true when most recently, in 2008, the UN Representative on Human Rights Yash Ghai went so far as stating in his March 2008 report to the UN Human Rights Council that “The real test will be if a suspect in or close to the Government is investigated and brought before the ECCC [Extraordinary Chambers in Courts of Cambodia].”

Control of the tribunal was the main issue over which the Cambodian government and the United Nations argued at every twist and turn. It was no surprise that the negotiations were protracted and acrimonious, even suspended in February 2002, as the UN walked out. The government's foot-dragging may have also contributed to improved relations between Hun Sen and China which, as erstwhile supporter of the Khmer Rouge, could be embarrassed by an international tribunal. In June 2003, the UN and the Cambodian government signed an agreement that established the Extraordinary Chambers in the Courts of Cambodia. It started functioning in 2006. 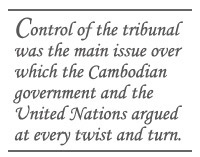 Since then, achievements of the tribunal include the arrest of top surviving leaders and the participation of highly regarded international judges and prosecutors. The addition of a unit in which victims can participate in the process is widely acclaimed. By July 2008 it was announced that the first trial would commence in September. In the end, it took four more months. Proponents argue that the tribunal can be a tool to improve the judicial system in a transitional state ravaged by war and political upheaval, as well as political interference and control.

On the negative side, the lack of an independent and trained Cambodian judiciary, continuing yet unspecific accusations of corruption, and budgetary woes serve to mar the progress, and in practice protracted negotiations continued during implementation of the agreement. As of February 2009, the international prosecutor continued to argue that five more defendants should be tried, while the Cambodians insisted five is enough,

As the tribunal is financed from voluntary contributions, individual donors influence the process. Donors were concerned when accusations of corruption surfaced. It's reported that the US, which has not contributed to the tribunal, and perhaps others as well, favor a court with a top international personality overseeing the Cambodian director of administration and the UN deputy. 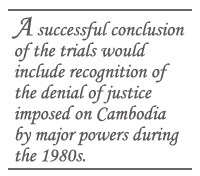 To placate the donors, new UN appointments were made in June, including David Tolbert, an ex-Yugoslavia tribunal prosecutor was named special expert to the UN secretary-general, with particular mandate over the budget. Knut Rosandhaug, veteran from the UN Kosovo mission took over from Michelle Lee as coordinator of UN assistance and deputy director of the tribunal administration; UN sources reportedly considered Lee, a Chinese national, as too lenient on the Cambodians. It remains to be seen how the new balance of power will play out in the court's day-to-day operations. At the end of 2008, the UN conducted an investigation of corruption in the tribunal, but the findings have not been published.

The trial, though late, still heralds a long-awaited process of healing and national reconciliation that require full accounting of what went on. A successful conclusion of the trials would include recognition of denial of justice imposed on Cambodia during the 1980s, a leftover obligation to be borne by donor countries. Such a successful conclusion for the tribunal would put an end to a dark chapter of history and exorcise the curse of the Khmer Rouge hanging over Cambodia.

Benny Widyono is author of “Dancing in Shadows: Sihanouk, the Khmer Rouge and the United Nations in Cambodia,” published by Rowman Littlefield in 2008. Click here to read an excerpt.