Lebanon’s peaceful protests that began in October have turned violent in the face of further economic collapse in early 2020. For instance, a protest in late January saw “heavily armed troops joined riot police at the scene, some carrying shoulder-launched rockets.” Protestors and security forces have begun clashing in recent weeks, with police resorting to firing rubber bullets, teargas and water cannons to break up demonstrators throwing stones, fireworks and other projectiles. The uprising threatens to draw Lebanon further into the rivalry for influence between Iran and the United States, “both of which count allies among rival groups in the tangled political system that the protestors want to reform.” The "forceful approach is the response to three months of peaceful demonstrations that have failed to produce a new government or ease financial and economic crisis. The value of the Lebanese lira has dropped by half in the last three months, and people cannot access savings. Meanwhile, the Hezbollah party is attempting to confirm a new cabinet headed by its nominee, Hassan Diab, a professor at the American University of Beirut who previously served as education minister. The party hopes that Diab’s appointment will appease protestors who demand exclusion of traditional political elites largely seen as responsible for the economic crisis. Yet any ties to establishment figures may derail popular support. – YaleGlobal

Read the article from the Washington Post about protests in Lebanon turning violent.

Liz Sly is The Washington Post’s Beirut bureau chief, responsible for coverage of Syria, Lebanon and the wider Middle East. She joined The Post in 2010 as Baghdad bureau chief. 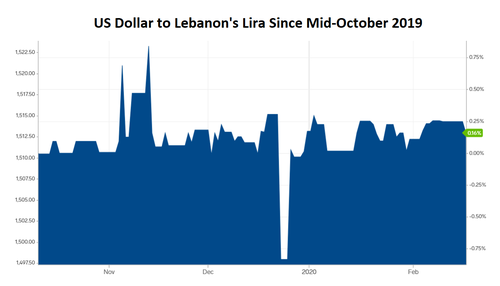 The Lebanese lira has been volatile in recent months, falling against the US dollar, ; the official exchange rate is 1515 (Source: Business Insider)