US analysts debate the legality of the US military using a drone to hit a convoy carrying Qasem Soleimani and other officials in Iraq. Most indications suggest the strike was illegal, explains Harold Hongju Koh for Foreign Policy. “U.S. officials had no business putting this illegal option on President Donald Trump’s desk, even as an ‘extreme option’ they expected the president would reject,” writes the Yale University international professor of law for Foreign policy. “The decision-making process was abysmal and ensured that the legal issues would not be properly vetted and that Congress would be denied its statutory and constitutional role.” The United States is not officially at war with Iran or Iraq, and a 2002 authorization for use of military force would not apply. “If killing him was an intentional decapitation strike, it was tantamount to declaring war on Iran, which under the U.S. Constitution’s “declare War” clause required congressional consultation and participation. And if his premeditated killing was simply to eliminate him, not a necessary and proportionate response to address the imminent threat of attack by Iran, it was an assassination without legal basis.” The policy did not consider the overall Iran policy and could upend respect for international law throughout the region, leading to future attacks on US citizens. Koh concludes, “Legality and sound process tend to promote more stable policy, while illegality and bad process foster policy disaster.” – YaleGlobal

Many had assumed the United States had moved beyond assassinations as immoral and illegal after the disaster of the Iraq War, but they were wrong
Harold Hongju Koh
Tuesday, January 14, 2020

Read the analysis from Foreign Policy on the legality of the US drone strike on Qasem Soleimani in Iraq on Jan 3.

Harold Hongju Koh is a professor of international law at Yale Law School and a founding editor of Just Security. He was legal advisor at the State Department from 2009 to 2013, and assistant secretary of state for democracy, human rights, and labor from 1998 to 2001.

Also read the article reporting that the US president had authorized a strike on Soleimani seven months earlier in the event of Americans deaths. 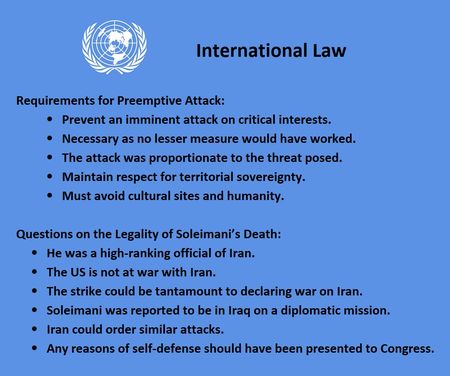