Although Hong Kong enjoys one of Asia's best public health systems, the spread of SARS has shown that even its well-run government has room for improvement. The former British colony's re-integration with China in 1997 has led to a booming expansion of trade and people flows across the border with southern China, but at the cost of increased vulnerability to epidemics such as SARS. To prevent future health threats from threatening everyone in the region, health care authorities on both sides of the border will need to implement some fundamental changes. – YaleGlobal 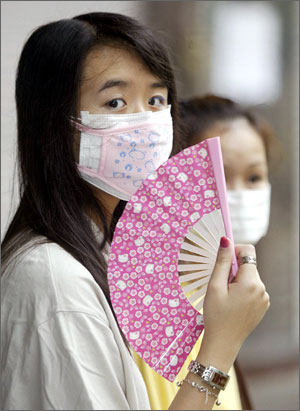 The invisible threat of SARS: How to keep it away? (Photo: AFP)

Hong Kong: Hong Kong and China can draw many lessons from SARS that should help improve their public health systems. Although Hong Kong has first class scientists, committed medical workers, and a good treatment system, its ability to deal with the syndrome has been undermined by insufficient crisis management among those in power. But this phenomenon is only one part of the bigger picture. In the long run, the challenge to Hong Kong's further integration with southern China's Guangdong Province is not just about building roads and bridges and easing border control but also about public health and disease control.

To understand this epidemic it is first necessary to analyze what Hong Kong did right and then turn to issues still needed to be resolved.

Hong Kong's first rate microbiologists worked night and day to identify the virus, which they did on March 24. Apparently, the virus is spread through droplets (i.e. vapour/sprays from noses/mouths) and can survive for up to a few hours outside the human body. A diagnostic test was available on 25 March, where results can be available within 8 hours. The disease should be renamed Coronavirus Pneumonia. The best prevention method is to wash your hands often. The virus is easily destroyed by disinfectants, alcohol and detergents. A mask, by itself, is not sufficient. Animals, but not domestic pets, are the likely origins of the virus.

Ever since the outbreak last month, hospital workers have labored round the clock to help patients. The level of commitment and professionalism from doctors and nurses should be commended. But hospital workers' efforts are insufficient without proper awareness, which only occurs with a free media. A free media allows information to circulate quickly and decision-makers can then explain each step they take. Included in media attention would be a daily tally in which the government provides daily information about the disease.

Despite these successes, there are still areas to be addressed.

Researchers believe that most flu pandemics in recorded history originated in South China (e.g. 1918, 1957 and 1968) because of poor public hygiene and crowded conditions. With humans and livestock living in close proximity (pigs and poultry), viruses develop and spread quickly. This is now particularly true with international travel. This requires South China, including Hong Kong, to reconsider its public hygiene system and change longstanding practices. Hong Kong needs to remind itself that the avian flu, which left its first major mark in 1997, comes back periodically, and the authorities have yet to succeed in changing how live birds are reared, slaughtered, and sold.

While awareness of the historical sources of outbreaks is necessary, specific improvements are essential. Hong Kong and Guangdong need to have clearer relations. The challenge for the regional authorities is not only to develop liaisons between transportation and logistics integration to promote economic growth in the region, but also to spend more time improving the "software" of the public health systems to track, record and report on diseases at their incipient stage so that precautionary measures to prevent the quick spread of a disease can be implemented.

More transparency within China will also go a long way towards preventing these crises in the future. Nevertheless, despite international and even some local criticism of China's handling of information, improvements have been made in recent days to provide public guidelines on SARS. The SARS experience is obviously being discussed intensely internally, and there are views arguing for greater transparency in the future (e.g., The China Daily, which is controlled by the Chinese Communist Party, criticized China's slow reporting of cases and limited sharing of information). Li Liming, the director of the Chinese Center for Disease Control, finally admitted on 4 April that China could have done better to provide more public information. And officials from the World Health Organization are finally being shown the case histories they need to better combat the spread of SARS. By being more forthright, China will save lives, garner local and international sympathy, and receive praise for cautious action to contain diseases.

But none of China's improvements mean that Hong Kong should take a rest. Since changing the system in Guangdong and the mainland will take time, Hong Kong has to develop an alert system that in the future will track information about diseases across the border and be ready to roll out precautionary and preventive measures when appropriate.

In the end, Hong Kong should review how it handled the crisis. Once calm returns, the authorities need to review honestly where they missed a beat on crisis management. There could be other diseases and crisis incidents round the corner. How the ministers and top officials handle the crisis can either give the public a sense of confidence or a feeling of dread. Panic can be exacerbated by poor crisis handling. Failing to track developments of the SARS in Guangdong since it first became known on 16 November 2002 may have been a key oversight of the review.