Looking over the Horizon

In assessing American foreign policy and strategy, the intertwined nature of the globe and the fast speed of change make any plan contingent on a variety of factors. In an effort to understand exactly that, the National Intelligence Council has created its '2020 project'. Using assessments of 'drivers' - factors that will affect the way the world changes - and a series of possible future scenarios, the project has created models of possible global orders that are relevant to far more countries than just America. Robert L. Hutchings, Chairman of the US National Intelligence Council which provides strategic analysis to senior policymakers, aims to show why these future oriented projections are vital for all policymakers to understand. He pinpoints the centers of change for the globe - demography, governability, information technological progress, and globalization to name a few - while envisioning the possible results these processes will have on the world at large. The findings thus far certainly suggest that unless the world accepts its intractable interconnections, a 'New World Disorder' is possible. If the world can learn to work together, the forces for positive change will hopefully bring up all nations to a higher level of development. - YaleGlobal

Looking over the Horizon 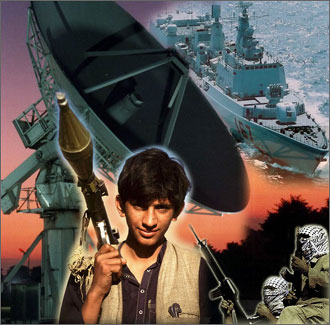 America's enemies may seek to offset their relative weakness by waging 'asymmetric warfare' via insurgencies and pursuit of weapons of mass destruction. (Image by Debbie Campoli/YaleGlobal)

WASHINGTON: As the 21st century begins, the United States is facing a more fluid and complicated set of international alignments than anything we have seen since the formation of the Western alliance system in 1949. In this situation, it is important that the US takes a longer-term strategic view - as a way of opening our minds to developments we might otherwise miss.

As I used to say to my students at Princeton, linear analysis will get you a much-changed caterpillar, but it won't get you a butterfly. For that you need a leap of imagination. I'm hoping that the year-long National Intelligence Council 2020 project - involving a series of dialogues and conferences with experts from around the world - will help us make that leap.

Mid-way through that project, let me offer a preview of the forces we see as driving change in the international arena and offer three possible scenarios for what the world of 2020 might look like.

First, Japan, Russia, and most of Europe will be coping with changing demographic makeups resulting in aging populations, unfunded pension systems, stressed social welfare systems, and shrinking work forces. China faces two consecutive demographic challenges: a huge increase in the working age population over the next 15 years, calling for massive job creation, is set to be followed by a sharp decline in the workforce and the rapid increase in the retired population.

Secondly, the ever-accelerating information revolution, driven by computer processing power and telecoms, will empower non-state actors, alter the distribution of political power, and create stress for governments and societies that are unable to adapt quickly enough.

A third process - globalization -will continue. Defined for our purposes as the mobility of labor, capital, and technology, there are few forces capable of doing more than slowing it down. While enriching nations overall, the process will continue to produce relative winners and losers within states. Losers are likely to blame globalization, though those losses may have occurred because of endogenous technical change, cyclic variation, or just plain bad luck.

The driver of governability - the capacity of governments to benefit from rapid economic and technological change, and cope with the potentially destabilizing impact of that change - is fundamental to understanding which political systems will survive from the 1990s into the 2020s. Thus far, traditional elites in the Middle East, Latin America, Africa and elsewhere have proven ill equipped to deal with the new political pressures and so may lose out in a changing geopolitical situation.

Finally, there is the problem of American power - not just the use of American power (whether we are using it wisely or unwisely), but the very fact of having such unrivaled power. We are in an unusual, perhaps unique, period in international politics in which one country dominates so thoroughly.

Washington need not worry about most states forming alliances to challenge the US, because other states lack the power to become a serious counterweight - and because, for most, American behavior is not sufficiently threatening to call for that kind of response. It is clear, however, that some rogue states and terrorist organizations will seek to offset their relative weakness by waging "asymmetric warfare" via insurgencies, jihads, and pursuit of weapons of mass destruction. 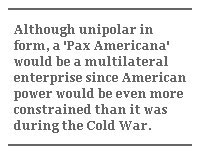 The final stage of the project will be to construct three to four global scenarios. For the sake of discussion, let me offer three possible scenarios - as a kind of test run - that we might think about as the 2020 project proceeds.

Pax Americana - In this scenario, the United States has managed to use its post-Cold War preeminence to patch together a new world order. US power is the key driver, yet the system reflects a number of tradeoffs required to bring other countries in and keep them in. Although unipolar in form, the system is in fact a multilateral enterprise in which American power is even more constrained than it was during the Cold War - because the United States will have to be the security "provider" in multiple regions and sacrifice some of its own freedom of action for the sake of "the system."

The global trading and financial system under Pax Americana is more heterogeneous, reflecting the numerous deals cut to accommodate and integrate China, India, Indonesia, Brazil, and other rising economic powers - by allowing them to continue following looser labor, regulatory, and environmental standards. They are in, but the international economy is less efficient and less beneficial to the United States. Geopolitics trumps economics in this scenario. 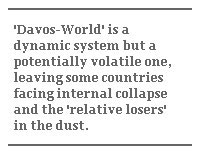 Davos-World - This is the world envisioned by the elites of the annual World Economic Forum in Davos. Unfettered economic globalization, led by multinational corporations and commercially oriented governments, drives this scenario. Rising economic powers led by China and India find that they can play - and prosper - within the existing rules of the global trading system. Unlike the previous scenario, they play by our rules - and learn to play very well indeed. Advanced industrial economies and emerging economies alike do well in this system; though the latter grow nearly three times as fast. The Chinese economy is by 2020 poised to overtake the US as the world's largest.

All is not well in this open-economy Valhalla, however. Relative losers within each economy are vocal about it; gains are widely distributed but costs are focused, usually by sector, often by region. The global environment suffers, while the poorest countries get poorer still. The United States prospers in this scenario, though its leadership role is much attenuated with the rise of rival economic powers and the diminishing practical utility of its vast military arsenal. Other countries are less inclined to follow our lead - but also have less reason to resent us or seek to constrain our power. Davos-World is a dynamic system but a potentially volatile one. By 2020, countries that have grown most rapidly must either achieve "dynamic stability" or face internal collapse.

New World Disorder - This is a more complicated scenario. Unlike the first two, which are purposefully driven by politics and economics, this scenario is the inadvertent result of a confluence of unrelated but plausible events that conspire to disrupt the global order. Advances in biotechnology lead to sharper global conflicts over genetically modified organisms; Europe withdraws into a green protectionist and regulatory tent, while the US, China, and most of the developing world embrace biotech and resist Europe in the WTO. The United States, meanwhile, remains preoccupied with international terrorism and still unresolved conflicts in the Middle East. The two dynamics increasingly fuel each other. The American economy bogs down, affected by - and contributing to - a global economic downturn, which in turn prompts a new protectionist backlash.

With the United States and Europe at odds, international cooperation erodes rapidly. International institutions cease to function; some are disbanded altogether. The United States manages rather better than others in this disorderly scenario, but its own future evolution is hobbled by a deeply divided global system.

Obviously, there are many other scenarios that one could envision: US-Chinese competition, growing regionalism, or apocalyptic events that make "new world disorder" look benign by contrast. I offer these three for consideration because they are quite distinctive and lead in unexpected directions - much like life itself. In any case, none of these scenarios is meant to be a prediction or forecast. Our goal in this project is not to predict the world of 2020 - we know we can't do that - but to better prepare for that world by opening out minds to new possibilities.

Adapted from a speech by Ambassador Robert L. Hutchings, Chairman of the US National Intelligence Council which provides strategic analysis to senior policymakers. These are not predictions nor do they represent official positions of the US Government.