France seeks an international tax on digital services like internet advertising. The United States has responded with proposed tariffs on French champagne, handbags, cheese and more. “The French leader is keen to reach an international agreement on taxing big tech companies and has urged the Trump administration to help reform global corporate taxes,” reports Reuters. “Internet giants … are currently able to book profits in low-tax countries like Ireland and Luxembourg, no matter where the revenue originates.” In 2019 France imposed its own 3 percent tax on digital services firms earning more than €25 million in revenue in France and €750 million worldwide. Britain, Spain, Italy, Australia, Mexico and Canada may follow suit while Denmark, Ireland, Sweden, Finland and other low-tax nations oppose the proposal, fearing a loss of foreign direct investment. A US trade report suggests that as many as two thirds of the companies that can expect to pay the tax are based in the United States. The International Chamber of Commerce and an expert group of the European Commission have cautioned against on a special tax regime for digital companies. G20 leaders, opposed to excessive competition over low tax rates, are exploring ways to close loopholes and end cross-border maneuvering. France said it would drop its digital tax once the Organisation for Economic Co-operative and Development reforms international tax rules. – YaleGlobal

French President Macron holds firm on a tax for digital firms like Google and Amazon, but the US cries foul and proposes tariffs on French champagne and cheese
Richard Lough
Friday, December 6, 2019

Read the article from Reuters about the French digital services tax. 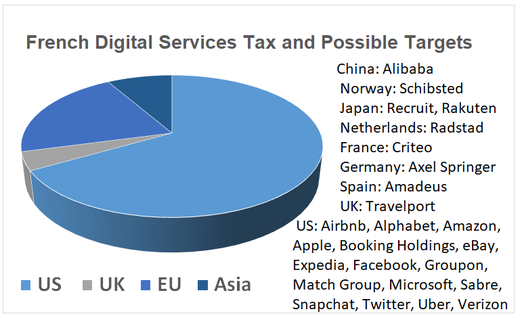 Whatever Will Be Will Be Free on Internet