Made in China: Wal-Mart Unions

Global labor leaders had long considered China’s unions as an arm of the government and not worthy of much respect. But that was before All-China Federation of Trade Unions (ACFTU) took on Wal-Mart managers in China and quickly set up union branches at more than 20 stores. The move – requiring grassroots organization that’s not been seen in China for more than 50 years – could signal more regulation over foreign firms operating in China or discontent among labor groups who question work conditions in the fastest growing economy in the world. The Wal-Mart success reinvigorated ACFTU, which had been losing members in recent years as the number of Chinese public firms decline. The union has since turned to Western unions for advice on collective bargaining and other organization techniques. It remains to be seen whether ACFTU can indeed achieve safe work conditions and a living wage for its Chinese workers. – YaleGlobal

Made in China: Wal-Mart Unions 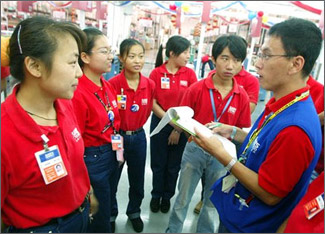 Grassroots strategy: Wal-Mart employees in China win an unprecedented victory opening the door to a different kind of trade unionism

CANBERRA: Surprise, surprise, the All-China Federation of Trade Unions (ACFTU), the trade union notorious throughout the world for being “useless,” has taken on Wal-Mart and set up branches at 22 Wal-Mart supercenters in China within four weeks. Western media coverage is generally dismissive that ACFTU can really act like a trade union and assumes that Wal-Mart has finally found a union it can live with. But the success of China’s only official trade union could have implications for other foreign-funded enterprises in China, and for union efforts abroad to organize Wal-Mart stores.

An analysis of some 40 Chinese newspaper reports demonstrate that in targeting Wal-Mart, ACFTU has taken on a task not attempted since the early 1950s – grassroots union organizing. Wal-Mart miscalculated in thinking that it could use the same anti-union tactics in China that it does around the world. Had Wal-Mart bowed to the ACFTU demand three years ago to let the union into its stores, those branches would have been like most workplace unions in China. Set up jointly with management, the unions would have been subservient to management. But Wal-Mart’s refusal to accept any union provoked the ACFTU. Publicly announcing three years ago its plans to form union branches at Wal-Mart, ACFTU was determined to succeed.

The reason is that, over the past decade, ACFTU national membership has declined, as the numbers of state-owned enterprises dropped. So starting in 1999, ACFTU became determined to expand membership in the foreign-owned sector. The image that China has become a big sweatshop has also been disturbing to Chinese union leaders. About three years ago, ACFTU selected Wal-Mart as a special target. By targeting the biggest and most high-profile company, the union took a leaf out of the global anti-Wal-Mart movement: If Wal-Mart fell into line, other foreign companies in China that refused to accept unions would have to follow suit.

When Wal-Mart rejected the union demands, as was normal practice for Wal-Mart internationally, ACFTU made a series of unprecedented moves. For the first time ACFTU openly threatened to take a foreign company to court for violating China’s trade union law by barring the union. Wal-Mart retorted that the law says trade-union membership is voluntary and that it is up to the employees to apply. Since none had, Wal-Mart was not violating any law.

ACFTU had never engaged in grassroots organizing, so going among workers to form a union instead of asking management permission was alien to ACFTU officials. For a long period, ACFTU persisted in seeking management’s cooperation so that a union branch could be introduced in a top-down fashion. For instance, the local union in Nanjing went to a Wal-Mart superstore 26 times in two years, but was not granted a meeting with the store manager. This humiliating experience was repeated many times over in Wal-Mart stores in other cities.

In the end, ACFTU realized that Wal-Mart employees would need to come forward to apply to set up a workplace union and to accomplish this, ACFTU had to resort to grassroots organizing techniques. This was kept secret from Wal-Mart’s management, just as unions elsewhere often operate in the face of hostile management.

According to recent Chinese newspaper reports, local union officials approached Wal-Mart employees after-hours, away from store premises and gave them literature to convince them to join. Trade-union law requires a minimum of 25 signatures to establish a branch. After securing the requisite number, a district union in Fujian Province sprang a surprise on Wal-Mart on July 29, and declared that a union branch has been founded at a local Wal-Mart superstore. According to local Chinese newspapers, the first five branches, announced one after another within a single week, had all gone through this grassroots organizing process.

Wal-Mart immediately went on the offensive. Management called big meetings, and according to Chinese newspaper reporters, announced warnings that employees who joined the union would not have their contracts renewed. But after a week, Wal-Mart capitulated. On August 16, it signed a memorandum with ACFTU which effectively allows a local union to go into the stores to propagate China’s labor laws, hold a multi-candidate union election for a union executive committee and a union chair, and represent workers in collective bargaining. Henceforth, declared ACFTU, the memorandum would become the template for setting up trade-union branches in thousands of other foreign-funded enterprises.

The success in organizing employees from the bottom up, against the wishes of an employer, has been taken to heart in an enthusiastic editorial that appeared in the Chinese-language ACFTU website the same day the memorandum was signed: “This successful experience in setting up Wal-Mart unions is groundbreaking in that we have discovered a new line of thinking. It not only will influence other foreign and private investors to quickly abide by the law to allow unions to be established, it also brings to trade unionists a new mission. Following the new logic in setting up unions, new adjustments in union work will be needed, be it in methods, in organizational structure, ways of identifying backbone activists, down to how to use union funds….”

ACFTU is not the monolithic structure it is often portrayed to be. Reformers in the union structure favor organizing principles and are willing to push the limits. The confrontation with Wal-Mart presented ACFTU with a future strategy.

However, the ability of the Wal-Mart union branches to develop into real unions depends much on the local district unions’ willingness to cultivate effective activists. Backing from local governments is also critical. The real problem is that local unions are often controlled by local governments that are keener in attracting foreign investment than in protecting workers.

Still, the branches offer workers new opportunity, even if limited. In past years, many workers in foreign-funded and private firms have lacked support from the union federation. Some engaged in wildcat strikes or took to the streets. Few envisioned that workers could use legally-sanctioned means to set up their own union branches, or that they might be given an opportunity to work within the space provided by ACFTU structure. Now with the Wal-Mart precedent, workers in other foreign-owned factories can legitimately demand democratically elected unions at their workplaces.

Such a possibility could, for instance, emerge at Foxconn, a giant Taiwanese-owed electronics company that supplies Apple, Dell, Nokia and other brands. Several weeks ago, “The Mirror” in the UK exposed Foxconn’s management practices at the vast factory that produces iPods – 12-hour shifts with employees forced to stand the entire time. Chinese media picked up the story and conducted their own investigations, and Foxconn employees voiced complaints on the internet, venting anger. The local Shenzhen city trade union has just announced that Foxconn will be obliged to have union branches by year’s end in its facilities. If they follow the lead of the memorandum signed by Wal-Mart, there would be elections for the union-branch leadership.

But Chinese union officials remain nervous about activities that are not the familiar top-down type. Even ACFTU reformers who want to re-enact the Wal-Mart experience are untrained and on unsure ground. So in recent years, they have reached out to several Western unions for advice and training in grassroots organizing techniques and in collective bargaining.

An implicit common front on the unionization of Wal-Mart may be shaping. It remains to be seen whether – and if so, how – the Chinese breakthrough holds any potential for workers and trade unions elsewhere in the world to organize in the labor-resistant Wal-Mart.