A fundamentalist streak of Islam within Malaysia is coming into conflict with the flourishing civil society that has made the nation a model of peaceful and democratic development in Southeast Asia. Muslims in Malaysia, unlike their Hindu or Christian compatriots, are ultimately subject to strict Islamic law, known as sharia. In fact, the national judiciary cannot override a ruling by a sharia court. These Islamic religious authorities intrude more into the everyday life and private matters of Malay citizens, preventing conversions to other faiths and separating children deemed Muslim from non-Muslim parents. The national government not only acquiesces to the assertiveness of the Islamic authorities, but has itself become increasingly outspoken on behalf of Islam worldwide. The paradox of a country that dreams of becoming a global technology and innovation hub, yet actively sponsors a repressive self-governed community in its midst, may soon become untenable. After all, an advanced economy runs on its people. By denying the full protection of its laws to half its citizens, Malaysia endangers the future prosperity of all. – YaleGlobal

Growing assertiveness of Islamic courts intrudes on the rights of non-Muslims threatening social harmony in the prosperous nation
Sadanand Dhume
Thursday, May 3, 2007 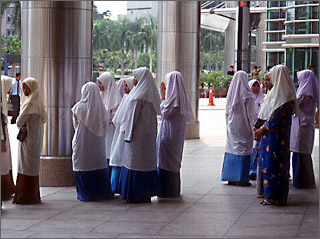 non-Muslims in the country raise disquieting questions about the

WASHINGTON: Those seeking a glimmer of optimism amidst the barrage of bad news from the Muslim world often point to Malaysia. It boasts a functioning democracy, a robust economy and a record of peace among its three major ethnic groups: Malays, Chinese and Indians.

Malaysia has done much to deserve its reputation for economic dynamism and social harmony, but a flurry of actions by the country’s hard-line Islamic authorities illustrates the contradictions within the Malaysian model, and raises doubts about the country’s effort to rise to the ranks of developed nations by 2020. In a globalized and increasingly competitive world, Malaysia cannot expect to modernize its economy without modernizing its society. In practical terms, this means choosing the universal values of freedom of conscience and freedom of inquiry over the narrow dictates of Islamic orthodoxy.

The most recent example of this ongoing clash between the modern and the medieval involves Revathi Masoosai, a 29-year-old ethnic Indian woman born to Muslim parents but raised by a Hindu grandmother. Last month, Malaysian religious authorities forcibly separated Revathi from her Hindu husband, Suresh Veerappan, and handed their 15-month-old daughter to Revathi’s mother. Under Malaysian law, anyone born to Muslim parents is automatically considered Muslim, and converting to another religion is illegal. (No such injunction bars non-Muslims from embracing Islam.) Since Muslims come under the purview of sharia, non-Muslims cannot seek redress from secular courts.

Revathi’s case is only the most recent of a string of similar incidents. In 2005 Islamic authorities deemed that M. Moorthy, a celebrated mountaineer and a practicing Hindu according to his wife, had secretly converted to Islam before his death. Over his wife’s protests, Moorthy’s body was taken from his family and given a Muslim burial. In another infamous case, Lina Joy, a computer saleswoman in her 40s, has spent nearly 10 years unsuccessfully seeking official recognition of her conversion from Islam to Christianity.

Two years ago, followers of an offbeat spiritual movement called Sky Kingdom – best known for revering a giant cream-colored teapot – saw their commune razed by authorities who declared their beliefs “heretical.” In recent months, Hindus have taken to the streets to protest a spate of temple bulldozings, including the demolition of at least two that date to the 19th century. In each of these cases, the government of Prime Minister Abdullah Badawi, who publicly champions a tolerant approach to faith called Islam hadhari, has stood by for fear of angering religious hotheads.

The nub of the problem lies in Malaysia’s inconsistent approach to modernization. Unlike neighboring Singapore, which stands for equality before the law and a strict meritocracy, Malaysia has sought prosperity against a backdrop of deepening Islamization and handouts for ethnic Malays, deemed by law to be Muslim. Until recently the Malaysia of vice squads and apostasy laws did not intrude upon the Malaysia of glittering skyscrapers and high-speed airport trains. But the rise of China, India and Vietnam, and the demands of a shift from low-cost manufacturing to more knowledge-intensive work, raise serious doubts about the viability of the Malaysian model. The country needs freedom of inquiry to unleash the creativity of its people. It needs to foster an atmosphere of tolerance to staunch the outflow of the country’s brightest non-Malays and to attract overseas talent and investment. Neither is likely without rethinking the twinned and contentious issues of ethnic preferences and religious supremacism.

Of course, it’s too early to write off Malaysia just yet. Its success over the past four decades depended on shrewdly balancing ethnic politics and pragmatic economics. After riots in Kuala Lumpur in 1969 between the prosperous Chinese minority and ethnic Malays, Malaysia instituted a program to raise the Malay share of national income. The government aggressively favored Malay businessmen with government contracts, and Malays gained a virtual monopoly on generous government scholarships for overseas study. At the same time – in order to grow the pie rather than to merely carve out a larger slice for Malays – Malaysia followed outward-looking economic policies that encouraged foreign investment and export-led growth.

As with other parts of the Muslim world, the rupture with the past brought by prosperity rose in tandem with Islamic consciousness. The OPEC oil boom of 1973 allowed Saudi Arabia and the Gulf States to bankroll efforts to Arabize the Muslims of South and Southeast Asia. The ripples of the 1979 Iranian Revolution were felt directly on Malaysian college campuses. During the 1980s the headscarf became ubiquitous among Malay women. Meanwhile, in a bid to outdo the Islamist opposition in terms of piety, the ruling party UMNO, United Malays National Organization, went on a mosque-building spree. Religious students made a beeline for the Middle East and Pakistan, and in a show of pan-Islamic solidarity, visa rules were eased for visitors from many Muslim countries.

In the wake of Malaysia’s troubles during the Asian Financial Crisis in 1997, long-serving Prime Minister Mahathir Mohamad became something of a global cheerleader for anti-Semitism – publicly peddling conspiracy theories about attacks on the Malaysian ringgit and accusing Jews of “rule[ing] the world by proxy.” Meanwhile, disregard for non-Malays – for the most part Buddhist and Christian Chinese and Hindu Indians, who together make up a third of the country’s 25 million people – expressed itself most clearly in the architecture of the new administrative capital Putrajaya. Gaudy domes and soaring minarets dominate the skyline, and an Isfahan-inspired bridge spans a massive artificial lake. Acknowledgment of other cultures is conspicuous by its absence.

By some measures, Malaysian affirmative-action policies have worked. The Malay share of corporate equity rose from less than 4 percent in 1971 to – estimates vary and those on the higher end are politically explosive – between 20 and 45 percent in 2006. Over the same period per capita income – in purchasing power parity terms – quadrupled, from about $3000 to about $12,000. Malaysia is the world’s 19th largest exporter.

At the same time, rather than enable the Malays to compete effectively as equals, Malaysia has ended up creating a class of crony capitalists dependent on government largesse and a Malay population that sees special privileges as a birthright. Often this supremacism is expressed in terms of religious intolerance. The one silver lining: Liberal-minded Muslims such as the lawyer Malik Imtiaz Sarwar and the academic Farish Noor have joined non-Muslims and a plethora of blogs in criticizing this trend.

These troubles could not come at a worse time. Malaysia’s traditional strength in low-cost electronics manufacturing is being challenged by the rise of China and Vietnam. The government has invested heavily in technology infrastructure in the form of the Multimedia Supercorridor, ambitiously hailed as the Silicon Valley of the East. But amid white-hot competition for scientific talent and despite relaxing some of the usual race laws, Malaysia finds it hard to attract and retain Indian and Chinese engineers. Meanwhile, many of the country’s brightest students – especially non-Malays – migrate to Australia, the US and Singapore, where everyone enjoys freedom of conscience and equality before the law.

For Malaysia then, the fate of Revathi Masoosai has wider implications. Its resolution will signal whether Malaysia seeks a future as a prosperous and pluralistic trading nation in the global mainstream, or a country whose inconsistent efforts to modernize ultimately doom them to failure.

Sadanand Dhume is a Bernard Schwartz fellow at the Asia Society in Washington, DC.