Man and His Endangered Home

In their single-minded pursuit of economic growth and wealth, human beings could be collectively working themselves out of a home. Human activities systematically degrade the water, air and other surroundings that sustain life. The problem is not with pending shortages of resources, argues systems analyst and philanthropist Bo Ekman, but a rapidly growing population and new generations that expect ever higher standards of living, with more products and space. Climate change alone will impose severe weather patterns, shortages of freshwater and displacement of entire communities. Humans complicate the problems of nature by dumping chemicals and manipulating the genetics of plants and animals. Many leaders recognize the crisis that awaits our grandchildren – but hesitate to restrain the growth. One reason is the widespread desire for the status quo in comfort, and another is a lack of trust in global institutions. Adding to the hesitation is an overwhelming confidence in new technology that might eliminate disease, shortages or an over-heated planet. Yet Ekman warns that new technologies might cause more problems than the old ones. The only sure solution is pursuing balance through sustainability. Survival of the human race may depend on ecological visions replacing growth as humanity’s driving force. – YaleGlobal

Man and His Endangered Home

Our pursuit of growth and luxury may leave us homeless
Bo Ekman
Thursday, September 28, 2006 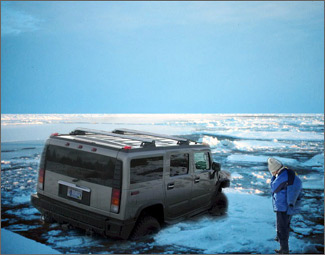 Hummer and Man: Our single-minded search for wealth and luxury may leave us in deep water. (© Debbie Campoli, YaleGlobal). Enlarged image

STOCKHOLM: Man – supposedly the most intelligent creature of a species-rich biosphere – has collectively painted himself into a corner: a problematical future of existential dimensions.

Human activities disrupt the life-critical ecological balances. All human life needs food, which in turn requires earth, water, energy and air. In essence, human beings need the earth, but earth actually does not need us.

The notion of sustainable development, introduced by the Brundtland Commission in 1987, is political incantation, easier said than done. It suggests that the contradictions of fast human technological/economic development and the slow conditions of evolution can be combined. The fact is evolution will pose problems as humans exploit environmental resources, manipulate genetics and release into nature chemicals that induce DNA species change. Results are already visible with the discovery of dual-sexed fish in China and the US.

The indigenous people’s worldview as part of nature was supplanted by man’s self-crowned superiority. This view led to a shortsighted exploitation of the environment without insight into long-term systemic consequences. In his book “Collapse,” Jared Diamond describes in detail how such events have led to the demise of particular cultures. Now the whole ecosystem is threatened.

The source of man’s problems is not the planet’s “shortages.” The underlying problem is the incredibly rapid increase of the human species – 650 percent in 200 years to 6.5 billion individuals – while doubling the average lifespan to 67.3 years. Rapid, accelerating technological revolutions made this possible. The world’s GNP has, since 1830, risen from $300 billion to $50 trillion today. And the drive to produce more and faster is ceaseless.

Still there is not one nation, investor or company that does not promise growth. Power builds upon fulfilling promises of growth, profits and jobs. The expectations of growth for 3 billion people – more jobs, wealth, greater living spaces, an auto-powered life of mobility to summer cottages and golf courses – is the root to why Mother Earth cannot cope with us. It would take four planets to meet these demands for all of us. A symbol of human folly must be the tanklike gas-guzzling Hummer that many flaunt as a macho icon.

The human species will likely increase by 2.5 billion people in 50 years. Most will anticipate a higher living standard and lifespan. This means politics and the economy are pressured to deliver 5 to 10 percent growth – a doubling of production in 25 years to $100 trillion. China, with 10 to 13 percent growth, is now the economic “miracle” in the world.

Warming of the planet, resulting from the worldwide push for growth, is the leading problem confronting man and his way of life. The scientific community is in agreement, so why don’t we act en masse? One explanation is that political and economic interests want to preserve “business as usual,” another is ignorance and intellectual laziness. Sir David King, the Blair government’s scientific advisor, recently scolded the life-threatening ostrich mentality of politicians. NASA’s Jim Hansen maintains that humanity must drastically, permanently reduce greenhouse gas emissions within 10 years to avoid raising earth’s average temperature 3 degrees Celsius this century. If the average global temperature rises by 3 degrees, 50 percent of all species would become extinct in their natural habitat.

An Indian study indicates that with a 2-degree rise the country will lose 25 percent of its food production For Bangladesh, the threat is the rise of sea levels by up to 5 to 10 meters over 100 years due to the increased rate of glacial melting in the North.

The Arctic and Greenland contain most of the world’s fresh water – only 4 percent of all water on earth. As Himalayan glaciers melt – source of Asia’s seven life-giving rivers to 50 percent of earth’s population – groundwater levels are falling throughout China, Pakistan, India and the US. The significance of this decline becomes clear when one considers that agriculture accounts for 70 percent of all freshwater usage.

Meanwhile, the energy need is massive. The demand to switch to renewable energy sources will be financially, politically and technologically difficult to meet in time.

The chains of connection are crystal clear. Greenhouse gases are connected to energy production and consumption, which connects to the explosion of population and growth, which increases water shortages made worse by energy demands, practices of forest and agricultural management. These influence land erosion that increases flooding. Global warming intensifies weather, droughts and forest fires. The warming of polar regions affects ocean currents, their patterns, the conditions for all marine species.

Politics faces a complex systems problem, with new levels of risks and costs for customers, investors, corporations. When in fear, humans act to reduce risk. We develop matching policies for fear of sickness and unemployment. Yet we do not act on climate change, perhaps because climate is a globally physical system, not owned by any nation.

We must solve a systems problem. Yet we are organized to solve problems piecemeal, focused on one thing at a time – tunnel visionaries. Interactivity and cooperation become complicated.

Systems-thinking builds knowledge and solutions based upon the acceptance of the complexity and interactivity of ecology and our existence. Globalization condenses these mutual dependencies between places, people, functions – with productivity and growth as driving forces, not political and ecological visions.

The market economy’s failure – and the systemic problem it poses – is that it is not able to integrate the full ecological costs in its calculations and accounting.

Norwegian business leader and Worldwatch Institute chairman, Øystein Dahle, argues that the market economy’s failure is its inability to recognize the ecological truth. Socialism’s failure was the inability to see economic truth. Economics must emanate from ecology and systems analysis to reduce the risks for society.

Unfortunately, we lack global institutions that are competent and trusted to lead society into a globally evolutionary sustainable path. Politics remains in the old paradigm, bound to the nation geographically, culturally, historically.

Current international institutions are primarily platforms to secure one’s own national interests. These will never be stronger than the will of the most influential member to see the whole-system problem. Military and financial power decide, not systems logic.

We have only ourselves with whom to negotiate. We cannot negotiate with melting glaciers. Nature reacts to humankind’s interference. As we cannot change the behavior of ecological systems, we must change ours.

Yet modern man’s behavior is basically reactive, with foresight rare. The Finnish philosopher, Georg Henrik von Wright, came to a deep, pessimistic conclusion that man places competition before morality, materialism before community: economy before ecology will lead to man’s own annihilation.

Today many place their hopes in new technology. Energy will become clean and renewable. Food will be produced fairly and in green value chains. Nano-level production will solve shortages of raw materials. Stem-cell research and gene manipulation will solve our health problems. But we should recall that the promises of “old” technologies, such as the combustion engine, led to the problems of our time. And so the next generation of technologies will create the next generation of systems problems.

New technology means that something existing must be expelled, destroyed. This is the core of capitalism: creative destruction. This mode of capitalism should be replaced by a market economy that instead builds upon creative evolution: Economy is subject to the conditions of ecology and evolution. Then we could, perhaps, recover a balance in the critical equation between economy, energy and environment.

Bo Ekman is chairman and founder of the Tällberg Foundation and an associated advisor at Tällberg Advisors AB.