Embarrassing sexual behavior can compromise an individual’s ability to handle classified government information, and foreign intelligence agencies strive to identify individual weaknesses in order to obtain sensitive information or disrupt government operations. Police raided a Florida massage parlor in February after the facility was reported to be providing sexual services with women trafficked from China. That specific facility was sold in 2013, but all involved are under scrutiny. The former owner is reported to have multiple ties with China, according to Mother Jones: She “sold Chinese business executives access to President Donald Trump and his family at Mar-a-Lago,” serves as “an officer of two groups with ties to China’s Communist government,” and “founded a Miami-based nonprofit that promotes ‘economic and cultural exchange’ between China and the West in coordination with ‘senior…Chinese leaders’ in the United States, according to a profile… on a Chinese social media platform.” Association with such an individual would raise multiple red flags for any US national security clearance review., but Donald Trump is president and has the power to over-ride any staff concerns. Investigations into Russian meddling in the 2016 presidential campaign also continue. – YaleGlobal

Li Cindy Yang, a Florida massage-parlor owner accused of peddling access to the US president, is reported to have ties to Chinese government-linked groups
Daniel Schulman, David Corn and Dan Friedman
Monday, March 11, 2019

Read the article from Mother Jones about an owner of a massage-parlor chain reported to have ties with Chinese officials while selling access to the US president.

Daniel Schulman is Mother Jones' deputy Washington, DC, bureau chief. Reach him at dschulman (at) motherjones.com. Dan is the New York Times best-selling author of Sons of Wichita, a biography of the Koch brothers, now out in paperback.

David Corn is Mother Jones' Washington bureau chief and an on-air analyst for MSNBC. He is the co-author (with Michael Isikoff) ofRussian Roulette: The Inside Story of Putin’s War on America and the Election of Donald Trump. He is the author of three New York Times bestsellers, Showdown, Hubris (with Isikoff), and The Lies of George W. Bush, as well as the e-book, 47 Percent: Uncovering the Romney Video that Rocked the 2012 Election. For more of his stories, click here.

Dan Friedman is a reporter in Mother Jones' DC bureau. 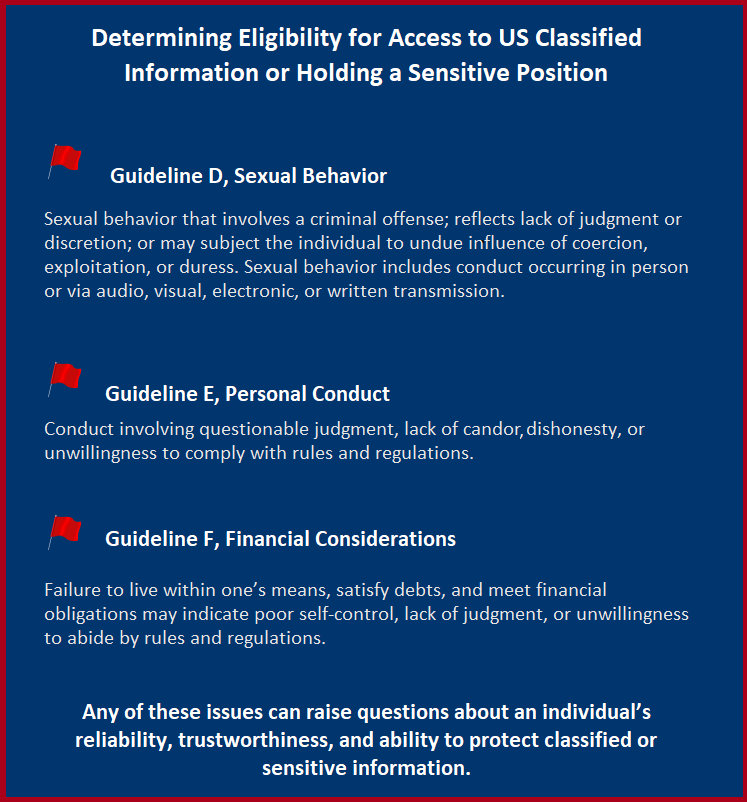 Also read the US National Security Adjudicative Guidelines which lay out issues for determining an individual's access to classified information or ability to hold a sensitive position. Any of the following can raise red flags for national security clearances.  The guidelines were signed in December 2016 by James Clapper, former director of US National Intelligence, and effective in June 2017:

Guideline A, Allegiance to the United States: involvement in, support of training, to commit, or advocacy of any act of  sabotage, espionage, treason, terrorism, or sedition. Also, association or sympathy with persons or organizations that advocate, threaten, or use force or violence, or any other illegal or unconstitutional means, in an effort to overthrow or influence the US Government or any state or local government; prevent government personnel from performing their official duties; prevent others from exercising their rights under the Constitution or laws of the United States or of any state.

Guideline C, Foreign Preference: When an individual acts in such a way to indicate a preference for a foreign country over the United States, then he or she may provide information or make decisions that are harmful to US interests.

Guideline D, Sexual Behavior:  Sexual behavior that involves a criminal offense; reflects a lack of judgment or discretion; or may subject the individual to undue influence of coercion, exploitation, or duress. These issues, together or individually, may raise questions about an individual’s judgment, reliability, trustworthiness, and ability to protect classified or sensitive information. Sexual behavior includes conduct occurring in person or via audio, visual, electronic, or written transmission.  No adverse inference concerning the standards in this guideline may be raised solely on the basis of the sexual orientation of the individual.

Guideline I, Some Psychological Conditions

Any of these issues can raise questions about an individual's reliability, trustworthiness, and ability to protect classified or sensitive information

Copyright © 2019 Mother Jones and the Foundation for National Progress. All Rights Reserved.