Jakarta, home for more than 9 million people, is prone to flooding with two-fifths of the city under sea level. The city with 13 rivers is increasingly swampy and rapidly sinking. Extreme rainfall with the start of 2020 is described as the worst in a decade, causing severe flooding. Indonesia’s weather agency, BMKG, suggested more than 370 millimeters, or about 15 inches, of rain fell in a single day. More than 20 deaths are reported with more than 30,000 people displaced. The agency blamed an unusual monsoon pattern and high temperatures in the Indian Ocean, resulting in vapor and cloud formation, as predicted by climate scientists. Plans to relocate the capital city to East Borneo are underway. – YaleGlobal

Read the article about flooding in Jakarta from the Jakarta Post.

Also read about Jakarta’s challenges from the World Economic Forum.

Also read an article about the government dispatch of aircraft to drop sodium chloride in an attempt to break up clouds. 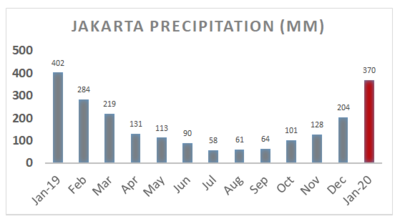