The Medium Shapes the Message

The fact that US President George W. Bush addressed audiences on Arab television this week made clear to all that Washington sees a need to communicate better with people in the Middle East about its policies and programs. Nonetheless, says Yale historian Seth Fein, past US efforts to promote American foreign policy goals through the media have met only with skepticism and distrust. A news network begun in the 1960s to counter pro-socialist sentiment in Latin America was later determined – by the US government itself – to be a complete failure at changing Latin Americans' views on the US. The new Washington-sponsored 'Al-Hurra' media network, explicitly aimed at inculcating appreciation for American values, is likely to experience the same fate in the Middle East, Fein argues. "An external effort to engineer public sentiment," Fein concludes,"might well become a costly source of the very resentments that the Bush administration wisely seeks to assuage." – YaleGlobal

The Medium Shapes the Message 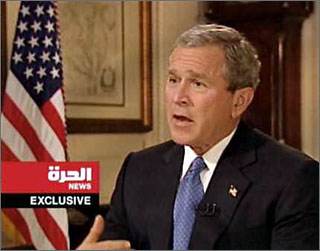 NEW HAVEN: This week President Bush appeared on two Arabic-language satellite television stations to address recent revelations about the abusive treatment of prisoners held under US authority in Iraq. One, Al-Arabiya, is based in Dubai, the other, Al-Hurra, in Washington. The need to make discrete presentations on a commercially successful, Arab-owned network and a US government run system loudly broadcasted Washington's mass-media dilemma: the only credible source of international information is one that is responsive to a Middle Eastern public, not Washington foreign policy, but such an outlet will unlikely be reliably pro-American.

On 14 February, the Bush administration launched a Middle Eastern Television Network, publicly known as Al-Hurra (“the free one”). The 24-hour news station broadcasts programs developed in its Washington-area headquarters for transmission throughout the Middle East. The administration frames its enterprise idealistically, promising that communication through the air can transform societies on the ground. Al-Hurra, the government's pitch goes, will deliver an alternative to what Washington views as the anti-U.S. bias that pervades the region's transnational TV. In doing so, its programming will supposedly cultivate latent economic and political progress as it wins hearts and minds. In an exclusive interview produced for Al-Hurra's inaugural broadcast, President Bush asserted that, in Iraq, “Today a free society has started to float to the surface.” However, Al-Hurra's development suggests less an expression of Middle Eastern public opinion from below than Washington's messages from above.

Even as U.S. foreign policy touts its version of globalization – as a dialectical relationship between free trade and free thought – it moves outside the market to marginalize disruptive mass-media perspectives created by the very international interplay of supply and demand that it panegyrically trumpets. In doing so, it strikingly diminishes the rhetoric President Bush invoked in last January's State of the Union speech, when he asked Congress “to double the budget of the National Endowment for Democracy” in order to help the Middle East develop, among other things, “free markets” and a “free press.” The static produced by the contradictions between Washington's current international broadcasting ventures and its neoliberal ideology seems to replay the 1960s, when the United States Information Agency's unattributed TV activities in Latin America flouted modernization theory's promise that capitalist reforms would deliver democracy and sovereignty as well as economic development and social progress to “third world” countries. What “modernization” was to cold war liberalism during the 1960s “globalization” has been to post-cold war neoliberalism since the 1990s. In each era, Washington's deployment of international television has disregarded the tenets of the official ideology it broadcasts.

On Sunday evenings in the 1960s, television viewers throughout Latin America could tune-in to Panorama Panamericano, a weekly news program filmed in the United States and shipped southward for local broadcast. The same USIA studio quietly produced two versions of the newscast – one in Spanish, the other in Portuguese – each with its own native-speaking anchorman. The program's authorship went unattributed; its introductory and concluding segments made no mention of its secret patron. With the Kennedy administration's appointment of TV news icon Edward R. Murrow as USIA director in 1961, U.S. propaganda decisively entered the television age, seeking to sell the new administration's Alliance for Progress as a liberal alternative to socialist revolution in Latin America, as the road from underdevelopment and totalitarianism and towards prosperity and freedom. 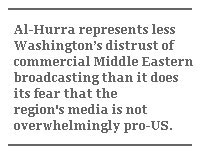 The Broadcasting Board of Governors (BBG), the agency that, in 1999, succeeded the USIA, operates Al-Hurra with native-speaking talent from throughout the world and funds supplied by the U.S. taxpayer - to the tune of $60 million, for first year costs alone, more than all other BBG projects combined. It intends its suburban Virginia studio to be the hub of an international system of Middle Eastern TV production. And like cold war (and pre-cold war) U.S. international information initiatives, Al-Hurra draws on talent from private-sector U.S. culture industries. Its chief proponent has been President Clinton's BBG appointee Norman Pattiz, chairman of Westwood One, the nation's largest radio network.

Amidst these similarities, there is an important difference between each project's implementation: Panorama Panamericano was part of the USIA's covert manipulation of Latin American television; the BBG has been ostentatiously overt in developing Al-Hurra. This difference in publicity, however, belies a key continuity: each project superficially reproduces regnant rhetoric as its actual implementation contradicts not only stated ideals but also presumed goals. The Bush administration has clearly announced that its objective in developing Al-Hurra is to counter the world's most-watched Arabic-language source of televised news, Al-Jazeera, with a station that Washington controls. Moreover, Al-Hurra's development implicitly recognizes the Qatar-based, 24-hour satellite network's popular legitimacy as an independent source of current events and opinion. Hence, Al-Hurra represents less Washington's distrust of commercial Middle Eastern broadcasting than it does its fear that the region's media is not overwhelmingly pro-US.

The BBG's current Strategic Plan's motto – “Marrying the Mission to the Market” – clearly expresses Washington's post-cold war neoliberalism. But sometimes U.S. foreign policy gets absurdly entangled in the contradictions produced by its own supply-side ideas about how to spread democracy. In early May, Pattiz trumpeted Al-Hurra's contribution to professionalizing and privatizing broadcast news culture throughout the Middle East, which “is not an environment that is steeped in the same traditions of journalism and objective news analysis that we are familiar with… broadcasters in the region are, for the most part, government owned, and reflect a particular point of view that can be destructive to opinion about the United States.” Pattiz's glib presentation of Washington's cross-border mass-media interventions as free-market antistatism – as the fruits not of war but of globalization – recalled not only modernization theory's solipsistic ethnocentricity but also that of the civilizing mission Washington invoked to justify its initial imperial interventions, a century ago.

If history is any indicator, it is unlikely that Al-Hurra's costs, in dollars as well as goodwill, will be worth its expense. Al-Hurra is no more likely to inculcate pro-U.S. sentiment than Reagan-era Radio and (later) TV Martí has brought regime-change to Cuba or than Panorama Panamericano persuaded Latin Americans that the Alliance for Progress could achieve modernization in the 1960s. A 1965 USIA public-opinion study of Panorama Panamericano's reception in San Salvador, for example, noted that local watchers considered the program “biased political propaganda,” and that “the sophisticated viewer recognizes it as a partly disguised attempt to promote the Alliance for Progress.” The survey concluded that Panorama Panamericano was essentially ineffective, that it did not change anyone's mind about U.S. foreign policy. Those who regularly watched already held pro-U.S. opinions and even among this group, “Only one of the four programs [studied] showed a desirable pattern of audience reaction.”

The Bush administration's decision to respond to its current crisis, by granting separate interviews to Al-Hurra and Al-Arabiya, demonstrated its recognition that its message required a regionally indigenous, non-U.S.-sponsored broadcaster. Al-Arabiya's inclusion underlines that the best public diplomacy would be not to impose officially sponsored U.S. television on the Middle East. As the history of cold war U.S. foreign policy too often demonstrates, nondemocracy in the name of democracy not only compromised principles but was counter-effective, especially in regions where public opinion is sensitive to past forms of international exploitation. Audience demanded, regionally endemic television – that inevitably criticizes Washington – is more in the interest of U.S. security and Middle Eastern democracy than an external effort to engineer public sentiment, one that might well become a costly source of the very resentments that the Bush administration wisely seeks to assuage.

Seth Fein is Assistant Professor of History at Yale University. He is working on a book about U.S. foreign policy and Latin American television in the 1960s.