A Mickey Mouse Approach to Globalization

New York Times columnist Thomas Friedman argues for a world united by common cultural experiences. But cultural globalization, writes historian Jeffrey Wasserstrom, is not so simple as eating a McDonald's hamburger that tastes the same on every continent. Standardized products like Big Macs and Starbucks coffee hold very different meanings in different countries, argues Wasserstrom. In China, for example, the world-famous Disney character, Mickey Mouse, fulfills a local political agenda, which is other than simply attacking Disney-promoted "Americanization" or the happy global embrace of this huggable mouse. According to Wasserstrom, the key to understanding cultural globalization is to identify "who is doing the wearing, singing, drinking, or shopping." To a Beijing university student, a Big Mac might mean romance, but to Friedman, it's just a burger. - YaleGlobal

A Mickey Mouse Approach to Globalization 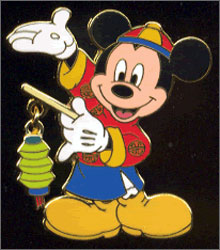 From Buenos Aires to Berlin, people around the world are looking more and more American. They're wearing Levis, watching CNN, buying coffee at interchangeable Starbucks outlets, and generally experiencing life in 'very American' ways. Looking only at the surface of this phenomenon, one might erroneously conclude that US cultural products are creating a homogenized global community of consumers. But the cultural aspects of the globalization story are far more complex than might be assumed from looking at just consumer behavior. Even when the same shirt, song, soda, or store is found on all five continents, it tends to mean different things depending on who is doing the wearing, singing, drinking, or shopping. The 'strange' fate of global products in China illustrates these points.

Consider, first of all, the Chinese meaning of Big Macs. In The Lexus and the Olive Tree, Thomas Friedman says he has eaten McDonald's burgers in more countries than he can count and is well qualified to state that they "really do all taste the same." What he actually means, though, is they all taste the same to him. Nearly identical Big Macs may be sold in Boston and Beijing, but as anthropologist Yan Yunxiang has convincingly argued, the experiences of eating them and even the meaning of going to McDonalds in these two locales was very different in the 1990s. In Beijing, but not in Boston, a Big Mac was classified as a snack, not a meal, and university students thought of McDonald's as a good place to go for a romantic night out. To bite into a Big Mac thinking that you are about to do something pleasantly familiar or shamefully plebian - two common American experiences - is one thing. To bite into one imagining you are on the brink of discovering what modernity tastes like - a common Chinese experience - is another thing altogether. 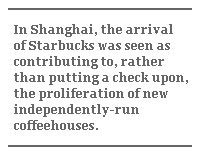 Or take the curious arrival of Mickey Mouse in China, which I witnessed firsthand. While living in Shanghai in the mid-1980s, two things I remember seeing are sweatshirts for sale on the streets emblazoned with the face of Disney's most famous creation, and a wall poster showing a stake being driven through Mickey's heart. Were these signs that a big American corporation was extracting profits from a new market and that local people were angered by cultural imperialism? Hardly. Yes, Disney was trying to make money, offering Chinese state television free cartoons to show in the hope that viewers would rush out and buy authorized products. But the plan went astray: the sweatshirts I saw were all knock-offs. The only people making money from them were Chinese entrepreneurs. And the wall poster was, of all things, part of a Communist Party health campaign. A call had just gone out for all citizens to work hard to rid their cities of rats, which are called "laoshu," the same term used for mice. It wasn't long before enterprising local residents put up posters showing various forms of violence being directed at "Mi Laoshu," as Mickey is known in Chinese, not because they hated America but simply because he was the most famous rodent in China.

Flash forward to the year 2000, when Starbucks first opened in both the American town I live in (Bloomington, Indiana) and the Chinese city I study (Shanghai), and we see further evidence of the divergent local meanings of globally familiar icons. In Bloomington, Starbucks triggered mixed reactions. Some locals welcomed its arrival. Others staged non-violent protests or smashed its windows, complaining that the chain's record on environmental and labor issues was abysmal and that Starbucks would drive local coffee shops out of business. In Shanghai, by contrast, there were no demonstrations. The chain's arrival was seen as contributing to, rather than putting a check upon, the proliferation of new independently run coffeehouses. 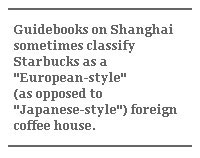 The local meanings of Shanghai Starbucks do not stop there. For example, when outlets open in Europe, they are typically seen, for understandable reasons, as symbols of creeping - or steam-rolling - Americanization. In Shanghai, though, guidebooks sometimes classify Starbucks as a "European-style" (as opposed to "Japanese-style") foreign coffee house. To further complicate things, the management company that operates the dozens of Shanghai Starbucks outlets is based not in Seattle but in Taiwan.

These examples of American products taking on distinctly new cultural meanings when moved from the US to China are useful in undermining superficial assertions equating globalization with 'Americanization'. But it is important not to stop there. The same thing has happened - and continues to happen - with the global meanings of Asian icons in America. Here, again, a Chinese illustration seems apt; that of a Middle Kingdom figure, Chairman Mao, whose face nearly rivals Mickey Mouse's in terms of global recognition.

One indication of the fame and varied meanings of Mao's visage is that in 2002 news stories appeared that told of the simultaneous appearance of the Chairman's image in three totally different national contexts. Representations of Mao showed up in the huts of Nepalese guerrillas; on posters carried by protesting laid-off workers in Northeast China; and in a London art exhibit. In Nepal, Mao was invoked because he endorsed peasant revolt. In Northeast China, his link to the days when Chinese workers had iron rice bowls for life was what mattered. And in London, it was his status as a favorite subject of a pop art pioneer that counted: the exhibit was a Warhol retrospective.

There is, in sum, more to keep in mind about globalization than Friedman's divide between the worlds of mass-produced Lexus cars and individuated olive trees. One reason is simply that a Lexus can mean myriad things, depending on where it is. Whether one first encounters it in the showroom or working the assembly line matters. And it makes a difference whether the people who watch it are seeing it whiz by as they walk the streets of Toledo or seeing it crawl as they sit on a Tokyo-bound Bullet Train. It is not just in physics, after all, but also in cultural analysis, that the complex workings of relativity need to be kept in mind.

Jeffrey N. Wasserstrom is the Director of the East Asian Studies Center and Professor of History at Indiana University.