Even small amounts of debt can contribute to lasting trouble for those living in developing nations. Vanessa Steinmetz describes the plight of a cassava farmer and father of five in Cambodia who struggles to repay a bank microloan of $3250 just before the prices of that commodity fell. He had placed a hectare of his farm as collateral, before selling other land at a loss and taking out another microloan. He ended up owing more than $11,000 and removing his children from school so they could help on the farm. He was one of almost 2 million Cambodians who took out microloans, a collective debt that could approach $8 billion, or about more than one fifth of the country’s GDP. Microloans are common in Cambodia because the Khmer Rouge had decimated the nation’s banking industry, followed by publicity around microfinance and the 2006 Nobel Peace Prize, as well as wealthy investors in the West seeking high rates of interest. After the turn of the millennium, microloans were still one of the Cambodian government's central methods for combating rural poverty,” Steinmetz writes, adding the government has since distanced itself from the practice. The country caps interest rates at 18 percent, and human rights organizations gather stories to compile advice and warnings. – YaleGlobal

Read the article from Spiegel Online about the extent of microloans in Cambodia.

Vanessa Steinmetz studied media and cultural studies in Düsseldorf and journalism in Hamburg and Taipei. Since 2016, she has been an editor in the political department of Spiegel Online.

Microfinance Barometer 2018 questions if microfinance can be socially responsible while seeking profitability, and suggests that sustainability and inclusion must be goals. 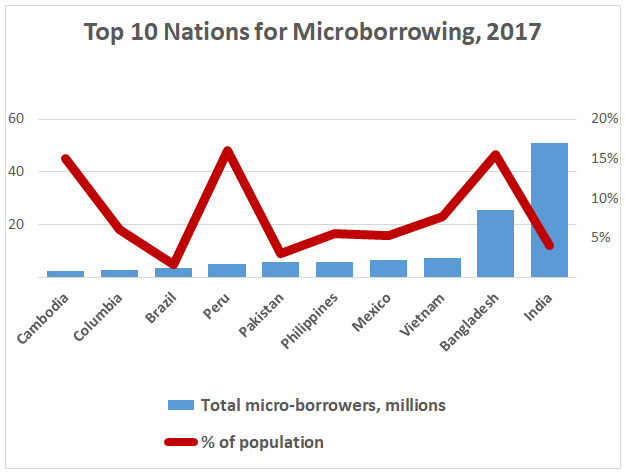 Micro-credit Pioneer Gets Nobel for Peace