At a time when many analysts predict a booming future for the Indian economy, India remains hesitant to fully embrace globalization. India and its neighbor China have been tagged as the world's next economic superpowers. Yet while China industriously makes its shores hospitable to foreign capital, Indian reformers continue to grapple with a long history of intransigent domestic opposition to liberalization. Such are the pitfalls of Indian democracy. Jessica Einhorn argues that despite the globalization-friendly rhetoric of current government, India's free market advocates must take a more committed stance towards globalization. Einhorn also suggests that India change the way it interacts with the international economy: Instead of stressing trade regionalism, cooperate more with the multilateral trade system, as structured around the World Trade Organization and the Bretton Woods Institutions. Only by reinforcing its domestic and international dedication to globalization will India fulfill the expectations of its multitudes thus far left behind by modernization. – YaleGlobal

To realize the promise, politicians have to compete on the reform agenda – not against it
Jessica Einhorn
Friday, February 25, 2005 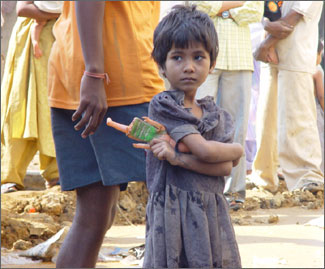 Broken dream: Mumbai girl in front of demolished homes in a slum. Millions of Indians wait for a better life. (Photo: Simone Bruno)

WASHINGTON: Does India need globalization? There are plenty of experts to tell all who listen, that globalization opens up tremendous potential for growth and poverty alleviation, and an outward-looking model frees up entrepreneurs to innovate and invest. Such expert advice from outside is not, however, necessary in India, whose political system already has important groups of reformers who do not need to learn from foreign experts, but who need external support in legitimizing the reform agenda that they wish for the country to embrace. Most importantly, they need the backing of India's own elite and politicians to carry through tough reforms.

The official line from the former Prime Minister Atal Behari Vajpayee's Economic Advisory Council is unequivocal, arguing, "Globalization is an unavoidable process which is taking place independent of us. It forces us to cope with it. There is not room in a globalized world for an economy delinked from world trade and foreign investment." The advisory council candidly says, "The truth is that if we do not reform rapidly, and position ourselves to compete, we will be marginalized. There is no divine dispensation that gives India alone the power to survive and prosper as an isolationist island in a globalized world." Under the new prime minister that conviction is undiminished. Nonetheless, universal consensus on this view is far from apparent; as a Financial Times columnist wrote in October 2004, "Globalization means many things to many people, particularly in India, which is host to probably the widest range of anti-globalization groups in the world."

Anti-globalization in India is historically rooted, as governments, unions, and businessmen have traditionally emphasized industrialization and self-sufficiency. Competition to this insular view came not from the ideology of liberal trade and capitalism, but from the followers of Mahatma Gandhi, who championed handicrafts and village industries as the economic path forward.

Indian ambivalence towards markets and free trade has been evident in the way it has dealt with the Bretton Woods institutions. The World Bank and the International Monetary Fund were created with the fundamental belief that protecting and expanding the system of liberal international trade would help avoid a third major global conflict. India has been a vibrant participant in these institutions, not only as a major client, but through its brilliant staff members and its commanding executive directors. And yet India never bought into the major premise of free trade and open markets, at least not as a prescription for economic progress at home.

Politics was also a factor, but only up to a point: While India during the Cold War found itself ideologically more drawn to the command and control model of the Soviet Union than the capitalism of the United States, the economic crisis of 1991 provided a real turning point for the Indian economy. The external payments crisis was the immediate impetus for forcing reforms, but more important perhaps, the major changes in the international system had by then cast a rather unfavorable light on India's approach to international trade and investment.

If the collapse of the Soviet Union was a shock of one sort, China's spectacular reform-driven growth after 1978 was incontrovertible evidence of what could happen when a country abandoned a planned economy in favor of greater market reliance internally, and greater engagement through international investment and trade with external powers. The 1991 crisis forced the Indian political establishment to embrace reforms quite simply because the status quo was not viable. While the first emphasis was to tackle the macroeconomic crisis, success in that arena also paved the way for reforms of domestic industrial investment policy, foreign investment regulations, and foreign trade.

Since the dark days of 1991, India has come a long way. It has healthy foreign exchange reserves (despite high levels of domestic debt), a booming software and services export market, and a burgeoning knowledge economy. Clearly India has tremendous potential to benefit from globalization, but there is also consensus that the challenges confronting Indian development are substantial, even daunting. India remains handicapped by enormous infrastructure and institutional (labor and capital) constraints. The question is not whether India has not begun to produce an impressive record in growth, employment, and poverty reduction, but rather how to overcome the obstacles impeding even faster progress, as the global economic system becomes increasingly competitive.

There are several discussions going on between India and its international partners. In the public sector, there are the ongoing trade negotiations, along with calls from the IMF and the World Bank to correct new macroeconomic imbalances and press on with reform. From the private sector, there are calls for microeconomic reform and infrastructure investment to allow India to take the giant leap that would position IT to alleviate its poverty and fulfill its potential as an economic powerhouse. 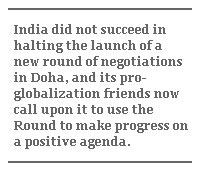 On the trade side, India is being called upon to break with its historical ambivalence towards engagement, and use trade negotiations to improve its position. India did not succeed in halting the launch of a new round of negotiations in Doha, and its pro-globalization friends now call upon it to use the Round to make progress on a positive agenda. India, they say, should be pushing to maintain liberal market access and circumscribe the anti-globalization agenda of expanding the scope for trade sanctions into areas such as human rights, labor and environmental standards. India should strengthen the multilateral trading system, rather than champion trade regionalism, and it should join other developing countries in reforming WTO decision-making procedures.

The important question going forward will be: How does democratic India build a politically stable cross-party consensus for economic reform? Or, more to the point, what are the politics of globalization in India?

Despite the robust democratic systems in place in both India and the United States, neither country can take for granted that its party systems will produce the kind of growing prosperity and opportunity that form the only real foundation for long-term sustainable democracy. Party politics can freeze privilege and hand it back and forth, or it can paralyze reform simply by blocking progress by the party in office. Commentators frequently claim, for example, that the complex story of the 2004 elections can be reduced to the simple explanation that the BJP was ousted because it did not pay enough attention to the poor. No one is suggesting, however, that Congress and its coalition will abolish poverty before the next election, or the one after that.

To avoid the stalemate of mutual recriminations, something more fundamental in civil society must be locked-in so that the context of party politics favors reformers in both parties, and gives them time to compete on the reform agenda instead of against it. Elites need to provide the political legitimacy to leaders in both parties who are willing to stand up for reform, or their children will be left to face the consequences. More than anything, India needs to find a way to campaign and govern against those privileged by regulation, and for those mired in poverty with a message that explains why the system must change for the relatively few, and how it will benefit the hundreds of millions who await modernity. The United States and the developed world too has to remember that in the era of globalization, we will either succeed together in building a more prosperous world, or we will suffer together as we each lose ground.

1 For an excellent discussion of this issue see: T.N.Srinivasan and Suresh D.Tendulkar, Reintegrating India, Institute for International Economics (2003).

Jessica Einhorn is dean and Professor at SAIS, John Hopkins University in Washington, D.C. This essay is adapted from a speech she gave in India in December 2004.