After years of Saddam Hussein's brutal dictatorship followed by a long war, Iraqis struggle with a poor economy with low job growth and corruption. The country is among the world’s top 10 oil-producing nations, and the government failed to distribute benefits two decades ago under Hussein and still fails today. Protesters are turning out in force, demanding jobs, improved living standards and new political leadership. Amid violent clashes with security forces, more than 100 protesters have died. Political analysts warn that escalation could lead to civil war. “The European Union, the International Committee of the Red Cross and other rights organizations have called on Iraqi security forces to exercise restraint,” report Ghassan Adnan and Isabel Coles for the Wall Street Journal. Iraq's economy is contracting, they add, and “The government hasn’t released unemployment statistics since 2017, when the jobless rate was 13%.” Iraq's population has nearly doubled, from about 23 million in the year 2000 to 40 million today. Oil accounts for about 90 percent of Iraqi revenue. – YaleGlobal

Iraqis turn out for protests as soaring state budgets have not produced jobs or growth despite growing oil production; more than 100 people have been killed
Ghassan Adnan and Isabel Coles
Monday, October 7, 2019

Read the article from the Wall Street Journal about protests in Iraq and a troubled economy.

Isabel Coles is a reporter for the Wall Street Journal. Benoit Faucon in London contributed to this article. 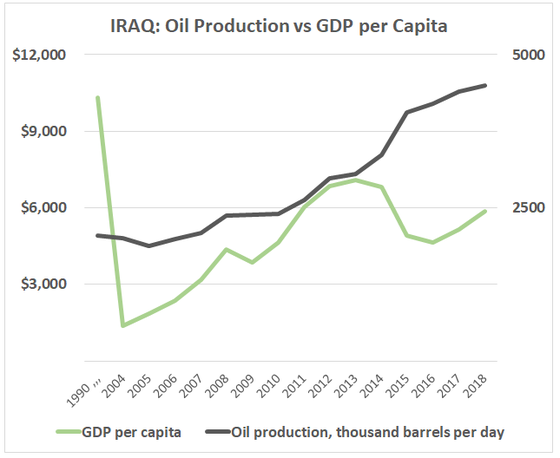 Struggle: Economic growth and GDP per capita do not keep pace with oil revenues (Sources: Index Mundi and Macrotrends)

The World’s Most Dangerous Black Markets

A New War Over Iraq

A New War in Iraq?

Middle East Review: Iraq and a “Road to the Sea”?

US Situation in Iraq and Afghanistan