Moments Before the Union, “Old” Europe Gets Cold Feet

As Europe's leaders prepare for their expansion party, they fear immigrant gate-crashers. Shada Islam notes that widespread fears of immigrants flooding Western Europe in search of employment, welfare, and health benefits has forced many governments to enact restrictions to stem this supposed flood. But the facts prove that these fears are unfounded. Past history shows immigration slows once integration is complete. Moreover, fewer Eastern Europeans will move than the populists predict and those that do will be primarily skilled. Meanwhile, Western European countries need immigrants from their poorer Eastern brethren to fill the shortage in unskilled labor and support pension benefits. Islam concludes that European politicians have allowed populist leaders and sensationalist journalists to frighten the public without correcting blatant errors. But quelling strife at home through wrong-headed policy is not the only worry. Already, the restrictions and rhetoric are generating ill will in Eastern Europe. Ultimately, EU integration will not succeed if some of the EU's citizens are more equal than others. - YaleGlobal

Moments Before the Union, "Old" Europe Gets Cold Feet

Fear of an avalanche of migration is making the western states nervous about enlarging Europe
Shada Islam
Wednesday, March 3, 2004 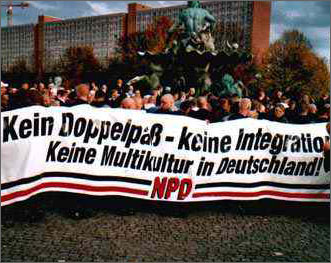 Germans demonstrate against dual citizenship, integration, and multiculturalism: But without immigration who will work when more Germans retire?

BRUSSELS: Behind the champagne and the smiles, the reality of European Union's enlargement is turning into a less-than-joyous affair. When leaders from 'old' and 'new' Europe meet in Dublin to celebrate the European Union's historic expansion from 15 to 25 states, this will become increasingly apparent. Governments in the current 15 EU states worry about the impact - financial and otherwise - of opening the bloc's doors to much poorer former communist nations of central and eastern Europe. Simultaneously, Germany, France, and Britain, among others, are reviving plans for a multi-track Europe where small groups of like-minded countries can forge ahead with integration without waiting for others. They fear that decision-making in an expanded Union will become even more difficult and unwieldy after enlargement.

What sours the EU's pre-enlargement mood is immigration. As future EU states look on in dismay, governments in old Europe are engaging in a frenzied eleventh-hour bid to pull up the drawbridges, creating a Fortress Europe to keep out hordes of new Europeans from seeking jobs and a better life in the more affluent West. Despite initial promises that their doors would remain open to the 72 million new Europeans joining the bloc in May, the 15 countries of old Europe have opted for some form of restriction - work permits, quotas, social welfare curbs - to dam the anticipated flood of poor Roma gypsies as well as Polish, Czech, Slovak and other workers.

Governments claim restrictions are needed to prevent the labor market disruption that would be caused by a sudden arrival of hundreds of thousands of low-wage workers. Officials also warn that Europe's increasingly fragile welfare systems could not support any surge in claims for unemployment and health benefits. Europe's high unemployment rates and stagnating Eurozone economy aid such arguments.

With expansion only two months away, hysteria rather than facts about East-West immigration certainly appears to fuel public discussion. Populist and xenophobic right-wing parties goad politicians across Europe to take a tougher line on future East European immigrants. Newspapers print dire scenarios of hundreds of thousands of economic migrants and "benefit tourists" arriving en masse in the West. As a result, public sentiment is also turning hostile towards the newcomers. 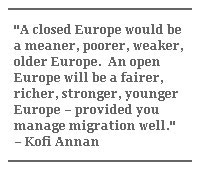 The irony is, of course, that old Europe needs young foreign workers to fill labor shortages in both the skilled and unskilled sectors of the economy. Immigrants are also needed to compensate for Europe's falling birth rates and to prop up creaking pension systems. "Since migration of workers leads to economic gains in receiving countries, this can be one of the major benefits of EU enlargement," former Dutch Prime

Minister Wim Kok argued in a report on the benefits of expansion written last year.

As their latest bout of pre-expansion jitters illustrates, however, EU governments are not skilled in managing immigration; an estimated 850,000 East Europeans already live and work in the West, many of them illegally. Unable to agree on a joint strategy, each EU state has opted for national immigration curbs, thereby making a confusing situation even messier.

Citizens from all ten new EU states should in theory have the right to settle and work in any other member of the Union as of May 1. But under pressure from wary governments in the West, EU newcomers have accepted so-called "transitional arrangements" that restrict the number of Eastern workers allowed to settle in the West. Germany and Austria, which share borders with new members, made it immediately clear that they would apply the full seven-year transition period allowed under EU rules to curb the free movement of workers. Most other states, however, initially vowed to keep their labor markets open.

Now, even Sweden and the Netherlands, traditionally open, welcoming societies, are putting up barriers. Britain, which (with Ireland) long stood alone in keeping the EU gates open, has also caved in to populist pressure. British Home Secretary David Blunkett has warned that all workers from new Europe will have to register with the authorities and will be unable to claim unemployment, housing and other benefits until 2006. No such restrictions apply to other EU workers. Following suit, the Irish Minister for Social and Family Affairs Mary Coughlan cautioned that she will not allow her country's social welfare system to become overloaded. Ireland will be "no less robust" than Britain in making sure immigrants do not exploit benefits, she warned.

The doomsday scenarios fed to a gullible public are, however, pure fantasy, say some experts. "Fear of a huge wave of migration from new member states after May will be proven to be unfounded," insists European Commission Margot Wallstrom. A European Commission report published in Brussels suggests that only about 220,000 Eastern Europeans will actually move to the West in search of work in 2004-2005 - hardly a massive influx. While many in the East may be telling reporters that they want to move west, "intentions on migration are much higher than actual migration," the study insists.

It is the young and highly-educated Easterners who will be heading west, not poor, unskilled laborers, the report says. Instead, the real risk is of "a youth and brain drain from the accession countries," the study underlines, adding: "The typical potential migrant is young, educated, and living as a single person with no dependents." The entry of such people in to Europe's labor market will "provide a much-needed input of highly-skilled individual able to contribute actively to the development of the European economy," Wallstrom stresses.

On the other hand, many Eastern Europeans may stay put and find benefits at home. Eastern Europe's low labor costs, along with the funds the EU will send to help poorer areas catch up to the rest of Europe, will attract flocks of investors, increasing opportunities. The experience of previous enlargements clearly shows that immigration diminishes rather than increases after new members enter the club. Immigration from Spain to other European nations has fallen from 200,000 a year in the 1970s, when Madrid was a poor outsider, to 2,000 a year currently. Thus, once expansion is a reality and the current furor has died down, immigration curbs "will just fade away," predicts Jim Rollo, Director for the Centre of European Political Economy at the University of Sussex.

For the moment, however, Western Europe's knee-jerk reactions are creating ill will and disenchantment in the East. Polish Foreign Minister Wlodzimierz Cimoszewicz and his Slovak counterpart, Eduard Kukan, have called the measures "unfortunate" and "unfair and unjust." Expansion should not start with the suggestion that some Europeans have more rights than others, warns Yongmi Schibel of the Migration Policy Group, an independent Brussels-based think tank. "This is already damaging attitudes in the new members towards Europe," she warns.

While public unease about migration is understandable, what is troubling is that Europe's politicians refuse to provide a worried public with clear facts on the realities of East-West immigration flows. Re-unifying Europe after decades of cold war divisions is an exciting challenge. EU leaders must make sure that the continent's historic integration on May 1 does not create a two-tiered Europe where some citizens are more equal than others.