US prices ballooned, and then burst. Now the government must borrow heavily once again to stave off an abrupt collapse in values and demand. Such heavy borrowing, 12 percent of the country's GDP this year, depends on the willingness of other countries to buy US debt. But solvent countries and sovereign wealth funds are nervous about their own stockpiles and the health of the global economy: Some investors like China may still purchase US debt, but as the global economy deteriorates, those purchases could mean denying funds to emerging economies also in dire need of credit or assistance. However, deficit reduction on the part of the US would revive export markets and the flow of credit and capital around the globe. As economist David Dapice suggests, the US faces two challenges: knowing when to switch from stimulus funding to controlling deficits and inflation, as well as controlling expenses of hefty entitlement programs such as Medicare and Social Security. "Unemployment, rising poverty and political instability are likely to be associated with any severe and prolonged recession," Dapice notes. The US can print extra money as a short-term fix, yet as economic pain extends around the globe, lenders may impose conditions and demand fiscal responsibility before purchasing future US debt. – YaleGlobal

But drying up foreign credit to the US could be bad for all
David Dapice
Monday, March 2, 2009 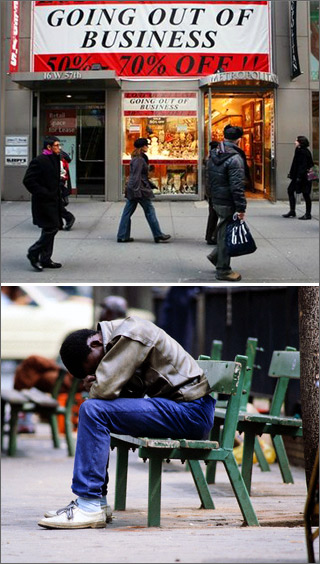 All fall down: Bailouts and store closures in the US (above) is sucking in foreign capital, leaving poorer countries in despair

MEDFORD: Make no mistake about it. The US budget deficits this year and in years to come will be huge. And the world will be asked for help to cover the yawning gap.

President Obama projects a $1.75 trillion deficit in 2009 and an average of $1 trillion in 2010 and 2011 – and most experts consider this to be optimistic. While deficits as much as 3 percent of GDP caused consternation not long ago, this year the ratio is over 12 percent, the largest since World War II. And these projections leave out contingent liabilities, such as backing the bankrupt mortgage companies or bailouts beyond those budgeted for. In short, the US government will need to rely on others to buy its debt and this cannot be taken for granted.

There’s no doubt that large deficits are needed now to offset the collapse in demand caused by the destruction of financial and housing wealth and weaker exports. The wealth destruction leads to lower consumption, and investment is depressed while banks repair their balance sheets. Without help, state and local governments will also cut spending. Without large federal deficits, the US could be looking at a rerun of the 1929-33 period.

In the short run, there has been no problem at all in selling Treasuries. Because of the general flight to safety, short-term Treasury returns are close to zero and even 10-year bonds pay about 3 percent a year, or only a little more than likely inflation. However, the huge flow of Treasury financing this year may cause that strong demand to waver. On the other hand, most households are quickly moving from saving nearly nothing to cutting back on spending and rebuilding depleted financial reserves. But this extra saving will fall well short of the amounts needed to finance likely deficits.

So, how can the US finance these huge deficits? The Federal Reserve might just buy the debt – that is like printing money. But this could cause inflation eventually, even if the dollar did not collapse even sooner. In the amounts likely, the surplus nations will have to continue buying ever-larger amounts of debt. There are two problems: First, the surplus nations might lose their appetite for such large amounts. Two, they might not be put off by the large US deficits, but starve developing nations of much-needed finance. It will be tough to steer a course between the Scylla of a US depression and the Charybdis of emerging economies collapsing. 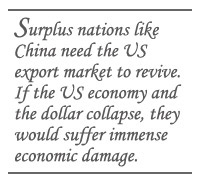 The reason for the surplus nations like China to buy US debt is that they need the US export market to revive and they already hold trillions of dollars of US dollar debt. If the US economy and the dollar collapse, they would suffer immense economic damage. This would make their dollar reserve assets worth a lot less and further depress exports. So China and others have an interest in pushing the US to recover and become fiscally responsible. Credit is likely to flow if it looks as if the US has a game plan to recover and get back to reasonable deficits. Despite all its problems, the US remains a safe haven and this works to its advantage.

On the other hand, with gold prices around $1000 an ounce, some investors are nervous. The amount of gold available to buy is small relative to deficit amounts, but creditors could use the money at home or to buy other assets. Overall, uunless the US plans to destroy the value of its currency, the interests of the US and its creditors are mostly the same. There is no way to isolate China and Asia from the US trouble, at least not now.

The impact of the world coming to the help of the US could have devastating consequences for poor nations. Many developing nations grew rapidly in recent years by receiving private capital inflows. In 2007, these flows amounted to $929 billion. In 2009, they are projected at $165 billion, an astonishing decline. While some of these nations copied the US and allowed debt to build up and property bubbles to form, others were quite conservative. But all will have a tough time, for they cannot print dollars as can the US. In addition, demand for many commodities is off and prices have crashed (such as oil or steel) and the spending on manufactured exports is also depressed. Unemployment, rising poverty and political instability are likely to be associated with any severe and prolonged recession.

President Obama has two related problems. One is to switch from stimulus to deficit-reduction mode without knowing when or how quickly the recovery will gain traction. The second is that over the next decade, the structural problems of Social Security and health care costs will begin to push up federal deficits a lot, no matter where the economy is in its business cycle. The second problem will require entitlement and perhaps overall health care reform in order to reach a solution. This has been attempted before, but without success. But if steps are not taken quickly, the outlook for the US debt burden and economy are poor.

It is frankly uncertain what the prospects are for rapidly reducing the US budget deficit in either the short or the longer term. The rapid reduction in projected deficits in the next few years assumes much faster economic growth than most economists now expect, and thus the projections assume more tax revenue than would be collected if growth were slower. The revenue from carbon credits is also a large assumption. A sober assessment would be that the new Obama budget is a best-case scenario, but not the most likely case. To take one example, the stimulus promises to create or save 3.5 million jobs over the next two years. But the economy may lose more jobs from last November to May. Likewise, few believe that the home foreclosure-reduction program will do nearly enough. And the policy of injecting capital into large failing banks also has many doubters. In short, it seems as if the economy is deteriorating faster than counter-measure policies are gaining traction. With interest rates already near zero, it is not clear what else can be done except for printing more money.

Over time, if health and pension reforms are slow in coming, expenditures will be higher or new taxes and fees will be lower than projected. This would compound the negative fiscal outlook and hasten the tipping point where creditors decided not to buy more US debt. At that point, the US could either print a lot more money or subject itself to the kind of austerity often suggested by the IMF for developing nations. Either would be painful – the first from a collapsing dollar and inflation; the second from lower government spending and higher taxes. A third path would be for the US to issue non-dollar debt. It might offer the Japanese debt denominated in yen, or the Germans debt in Euros, for example. This might put off hard decisions for a while, but then explicitly defaulting on debt (instead of inflating it away) would become a possibility.

Everyone should hope for a quick US recovery and deficit reduction. This would revive global export markets; allow capital flows to return to emerging markets, and return the US and global economies to a sustainable path. But this scenario is not the most likely.