The murder of two activists dedicated to protecting monarch butterflies has turned attention to illegal logging in Mexico. “El Rosario sanctuary provides a home for millions of migrating monarch butterflies each year and draws thousands of tourists annually,” reports Julia Conley for Common Dreams. “But the reserve has also drawn the ire of illegal loggers in Mexico, who are banned from cutting down trees in the protected area. Before the ban, more than 1,000 acres of the woodland were lost to the industry between 2005 and 2006.” Global Witness reports that at least 14 environmental activists were killed in Mexico in 2018. Amnesty International Mexico has demanded immediate investigations. The butterflies migrate the length of the continent and winter in Mexico. The Center for Biological Diversity estimates that the monarch population has declined by 80 percent over the past two decades, with herbicides and pesticides also named as culprits. – YaleGlobal

Two environmental activists are reported murdered at a Michoacán reserve; the habitat and eastern monarch butterfly are under threat due to illegal logging
Julia Conley
Wednesday, February 5, 2020

Read the article from Common Dreams about the murder of two environmental activists, Raúl Hernández Romero and Homero Gómez González, in Mexico.

Julia Conley is a staff writer for Common Dreams.

Read more about decline of the monarch butterfly population from the Center for Biological Diversity. 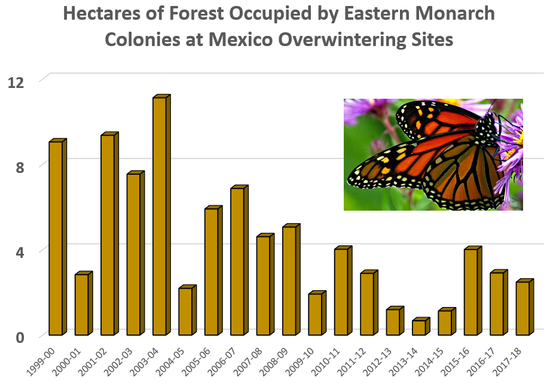 Is the USDA Silencing Scientists?

Work is licensed under a Creative Commons Attribution-Share Alike 3.0 License.