Sixty years after the atomic bombings of Hiroshima and Nagasaki, some newly disclosed journalistic accounts offer a unique insight into wartime press controls. A copy of Chicago Daily News reporter George Weller's dispatches, which were stopped in 1945 by US military censors, has recently been uncovered by his son. Both Weller and another reporter had documented the atrocities in post-bombing Japan, but only one successfully made it to press. According to historian Mark Selden, Australian war correspondent Wilfred Burchett – who had eluded the censors – had been the first reporter to cover the A-bomb aftermath, chronicling the severity of the destruction and subsequent radiation sickness at Hiroshima. In response, the US government flatly denied reports of deadly radiation and its lingering effects, and accused Burchett of falling for Japanese propaganda. Ironically, notes Selden, the reporter who eventually won the Pulitzer – the highest journalistic award – for the A-bomb story was William L. Laurence of the New York Times; Laurence, who echoed the official disinformation, was later found to be on the Pentagon payroll. – YaleGlobal

Newly unearthed documents show how the story of the A-bomb was suppressed and revealed
Mark Selden
Thursday, July 7, 2005 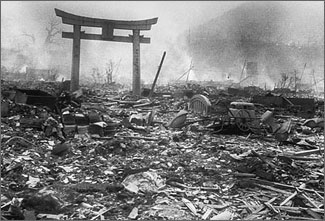 ITHACA, New York: Sixty years after the atomic bombing of Hiroshima and Nagasaki, some of the first reportage of the deadly impact of radiation – before the term had come into popular use – has reemerged from behind the veil of US censorship, thanks to the uncovering of the dispatches of Chicago Daily News reporter George Weller.

Weller evaded military censors to reach Nagasaki by rowboat and train, and documented the destruction and the fate of GI prisoners, and the mysterious "Disease X," or radiation sickness. But because he submitted his stories and photographs to the occupation authorities for approval, they remained censored – until a copy of his original dispatch was found and published by his son this year.

The rediscovery makes a fascinating comparison with the best-known early account of Hiroshima by Australian war correspondent Wilfred Burchett. 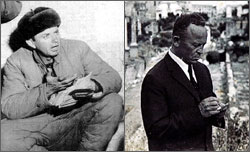 Truth telling: Australian Wilfred Burchett (left) and American George Weller told the A-Bomb horror story, but one report was reviled and the other suppressed

At the end of the Pacific War, as the entire allied press corps focused on Japan's formal surrender aboard the USS Missouri, Burchett on September 2, set off on a 20-hour train ride to Hiroshima, evading US military efforts to confine reporters to Tokyo and away from the A-bombed cities.

Seated on a concrete block surrounded by devastation and typing on a Baby Hermes, Burchett began his dispatch: "In Hiroshima, thirty days after the first atomic bomb destroyed the city and shook the world, people are still dying, mysteriously and horribly – people who were uninjured in the cataclysm from an unknown something which I can only describe as an atomic plague."

He went on, "Hiroshima does not look like a bombed city. It looks as if a monster steamroller had passed over it and squashed it out of existence. I write these facts as dispassionately as I can in the hope that they will act as a warning to the world."

Burchett scooped the world when he eluded censors who confiscated his camera but failed to stop his telex. His first account from ground zero, banner headlined in the London Daily Express on September 5, 1945, told the world about the radiation that was the most mysterious and terrifying consequence of the atomic bomb.

The report forced damage control measures by the US, which sought to reaffirm an official narrative that downplayed civilian casualties, flatly denied reports of deadly radiation and its lingering effects, and accused the reporter of falling for Japanese propaganda.

Doctors in Hiroshima had told Burchett about the major symptoms of radiation, and their helplessness to treat it. "At first we treated burns as we would any others, but patients just wasted away and died. Then people without a mark on them, including some not even here when the Bomb exploded, fell sick and died. For no apparent reason their health began to fail. They lost their appetite, their hair began to fall out, bluish spots appeared on their bodies and bleeding started from the nose, mouth and eyes. ... And in every case the patient dies ... there is nothing we can do about it."

Just four days after Burchett's report appeared, Major Gen. Leslie Groves, head of the Manhattan Project, invited 30 reporters to New Mexico to set the record straight. William L. Laurence, the New York Times science reporter, had been recruited to the Pentagon payroll by Groves in March, and witnessed the Trinity test in the US and Nagasaki bombing from a US Air Force plane. Laurence, who coined the term "the nuclear age," wrote most of the official US statements about the bomb – faithfully echoing Groves' accounts.

The Times headlined his story on September 12: "US Atom Bomb Site Belies Tokyo Tales: Tests on New Mexico Range Confirm that Blast and Not Radiation Took Toll." The story began by explicitly attacking "Japanese propaganda that radiations [sic] were responsible for deaths even after the day of the explosion." For this and other reportage hailing the technological achievement and downplaying the deaths associated with the atomic bomb, Laurence would receive the Pulitzer Prize. It was among the earliest and most handsome paybacks for what we now call embedded journalism.

Weller's reports, a carbon copy of which were unearthed by his son, Anthony Weller, in a Rome apartment in 2004, two years after the reporter's death at the age of 95, and serialized in Japanese and English in the Mainichi Shimbun paper and online editions in June 2005, also make disturbing reading. But his conclusions differ profoundly.

Where Burchett warned of the dangers of nuclear war and raised disturbing questions about the US bombing, Weller staunchly defended the US from charges that anything was amiss in the decision to destroy the two cities with atomic bombs. "The atomic bomb," his first dispatch began, "may be classified as a weapon capable of being used indiscriminately, but its use in Nagasaki was selective and proper and as merciful as such a gigantic force could be expected to be."

Weller echoed Truman's claim that the US attacked military targets: "[N]o saboteur creeping among the war plants of death could have placed the atomic bomb by hand more scrupulously. ..." It was a judgment that ignores the obvious fact that in Nagasaki, as in Hiroshima, ground zero was pinpointed to exact the largest possible civilian death toll.

Weller insisted that the atomic bomb was a bomb like any other: "The impression grows that the atomic bomb is a tremendous, but not a peculiar weapon. … The Japanese have heard the legend from American radio that the ground preserves deadly irradiation. But hours of walking amid the ruins where the odor of decaying flesh is still strong produces in this writer nausea, but no sign of burns or debilitation. Nobody here in Nagasaki has yet been able to show that the bomb is different than any other, except in a broader extent flash and a more powerful knock-out." It was Weller's good fortune to have roamed Nagasaki not in the immediate aftermath of the bombing but a month later when the effects of radiation had dissipated.

Weller, too, came to recognize the special horror of the effects of Disease X. "The atomic bomb's peculiar 'disease,' uncured because it is untreated and untreated because it is not diagnosed, is still snatching away lives here. Men, woman and children with no outward marks of injury are dying daily in hospitals. ..." Yet he insisted that the bomb is no "different than any other, except in a broader extent flash and a more powerful knock-out."

Six decades ago, two reporters broke US censorship to provide compelling accounts of the impact of the atomic bombs on Hiroshima and Nagasaki. One of those, Burchett, told the story to the world, eliciting US official denial of such truths as the impact of radiation on its victims. The other, Weller, also documented the deadly toll not only of blast and fire, but of radiation, while steadfastly denying the peculiar character of the bomb. It is his documentation of the impact of the bomb, and not the reflexive patriotism that led him to defend the targeting of civilians and to minimize the unique effects of radiation, that makes his long-censored report worth reading today.

Mark Selden is a coordinator of Japan Focus, an e-journal at http://japanfocus.org and professorial associate, East Asia Program, Cornell University. His books include The Atomic Bomb: Voices From Hiroshima and Nagasaki (with Kyoko Selden).