As China's center for foreign investment and cosmopolitan culture, Shanghai provides an intriguing case study on the intersection of globalism and nationalism, writes James Farrer. During the recent wave of anti-Japanese protests, demonstrators' voices alternated between an intensely nationalist rhetoric and a more subdued, moderate internationalism. And as for government reaction to the protests, while the Beijing leadership saw no need to address affected business owners, the city – after failing to intervene – summarily reacted with apologies and offers of compensation. Farrer states, "The city government clearly was not willing to further endanger its cosmopolitan ambitions to play to nationalist sentiments." In the end, he writes, "The local cosmopolitanisms developing in key polities such as Shanghai, creat[e] mixed loyalties which – at least in peaceful times – may moderate more radical expressions of national sentiment." As for more turbulent times, that remains to be seen. – YaleGlobal 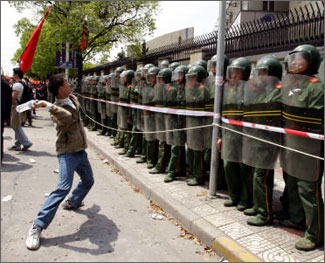 SHANGHAI: One of the more surprising aspects of the recent series of anti-Japanese demonstrations in China was the role played by Shanghai, China's most cosmopolitan city. The experience of Shanghai in dealing with nationalistic sentiments may offer a case study of the constraints that a globalized city's well-being imposes over narrow nationalistic pulls. For the time-being the Chinese and foreign stakeholders in global Shanghai have succeeded in containing the damage but questions remain about the future.

As sociologist Saskia Sassen argues, a few major cities are key centers in processes of globalization, including flows of foreign labor. The largest center of foreign investment in China, Shanghai has overt ambitious of becoming China's "global city." Shanghai's identification with foreign culture hearkens back to the century (1841-1949) of semi-colonial governance in which Shanghai was the most modern and western city in China. In 2003, the city publicly embraced a goal of increasing the expatriate population to five percent of the metropolitan total, a level described as standard for a global city. Japanese are the biggest foreign community, with close to 35,000 long-term residents registered with the consulate.

When Shanghai students and office workers marched into the consular district on April 16, destroying signs and shop windows and shouting "Japanese out of China!" – both they and the Chinese government seemed willing to risk those global commitments for the nationalist cause. A closer look, however, reveals a more moderate politics shaped as much by local concerns as nationalist sentiment.

Within the protest itself, participants voiced four dominant discourses. The loudest voice was a simple patriotism of flag waving and patriotic songs. The second and harshest voice was an unreflective Japan-bashing with little political content; common insults included "Japanese devils" and "Down with Japan." The third discourse was a political argument against right-wing nationalism in Japan. Many protesters argued that the textbook revision and visits by Japanese government officials to the Yasukuni shrine were grounds for opposing Japan's membership on the UN Security Council.

A fourth distinctive discourse was a self-consciously moderate internationalism, which was evident in posters praising Germany for its admission of war guilt, and even a willingness to cooperate with Japan. When asked why they opposed Japan, a mixed group of students and young workers strongly disagreed with the phrasing of the question. One replied, "We are not against the Japanese people or against Japan." Another protester showed a reporter that he was wearing a John Lennon t-shirt. "John Lennon was married to a Japanese," he said, "so I am not against all Japanese."

Individuals in the protest slipped between one discourse and the other. These rhetorical switches reveal the tensions within the cultures of nationalism and cosmopolitanism simultaneously present in Shanghai. Intellectually and ethically, the most blatant gap was between the protesters dehumanizing language of "Japanese pigs" and their own stance against "right-wing textbooks" in Japan. More generally, the nationalism displayed by the protesters clashed with their larger claims to internationalism both within and outside the protest. In everyday life, Shanghai youth direct their energy at amassing cosmopolitan cultural capital, including the latest Shiseido cosmetics and Japanese manga. This does not mean they reject modern expressions of Chineseness, but foreign culture makes for greater status in cosmopolitan Shanghai. The demonstration was a rare chance to show a national pride that is usually subordinated to a cosmopolitan but also very local Shanghainese identity.

Local government reactions also showed conflicting pressures between national and local interests. The day before the protest, the Shanghai City Public Security Bureau used SMS messages and other media to discourage participation. On the ground, however, they facilitated the protests by allowing protesters to take over a city block and surround the Japanese consulate. This passive strategy was aimed not to promote destruction, but rather to limit conflict between the police and the protesters. Damaged relations with the local Japanese community were less a worry than provoking anti-government sentiments among students.

While these tactics conformed to the national government's political priorities, they were a substantial setback for municipal Shanghai's global aspirations. The day after the protest, the municipal government went into damage control mode, contacting shop owners whose property was destroyed and providing forms to claim compensation (though not specifying how much would be paid and when). The head of Shanghai's Foreign Affairs Office met with the Japanese consulate general and expressed regret for property damage. Therefore, while the Chinese national government publicly denied any need to apologize or compensate for the protests, the Shanghai city government moved quickly.

By the next weekend, Shanghai media painted the protests as an illegal riot that had "damaged the image of the city." A Shanghai Television News Special Report showed extensive video of the mob violence and repentant interviews with two of 16 convicted rioters. The next day's Shanghai Morning Newspaper urged students not to follow agitators who want to "bring this ugly behavior again to our beautiful city." An April 26th editorial in The Liberation Daily of Shanghai went so far as to suggest that the protests were part of an "evil plot" to disparage the Communist Party. That same day, city leaders declared on Shanghai Television that the demonstrations were "not a true expression of patriotism" and urged a "more rational nationalism" based on hard work and study. Despite initially letting the protests happen, the city government clearly was not willing to further endanger its cosmopolitan ambitions to play to nationalist sentiments.

The initial reactions of the local foreign community shared this split between nationalism and cosmopolitanism. Although few foreigners in Shanghai worried about their immediate safety, many felt that by allowing violence against foreign property, the police had set a dangerous precedent for future demonstrations. Japanese residents were alarmed and angry but said they were planning to stay. Their local ties to Shanghai outweighed national rivalries, and Japanese companies could not afford to pull out. For instance, Teruo Katayama, a Kyoto native whose popular restaurant suffered US$40,000 in direct damages quickly reopened on April 28th to the personal encouragement of loyal Japanese customers and the assurances of local policemen. His 31 year-old daughter Emi said she was "sad and disappointed" but not angry at the Chinese. Elsewhere, at a meeting of a Chinese-Japanese friendship club, roughly 20 Chinese and 15 Japanese attendees called for more personal contacts, including international marriage, as a solution to national misunderstandings. Japanese and other foreigners in the city remain committed to the vision of a cosmopolitan Shanghai despite doubts about government protections during any future political crisis.

As China's rising global city, this Shanghai story also has implications for understanding the politics of globalization more generally. Political motives cannot be reduced simply to a story of narrow local and nationalist loyalties versus globally oriented economic interests; we should also take into account the local cosmopolitanisms developing in key polities such as Shanghai, creating mixed loyalties which – at least in peaceful times – may moderate more radical expressions of national sentiment.

James Farrer is Associate Professor of Sociology at Sophia University in Tokyo and visiting professor at Fudan University in Shanghai for the 2005 academic year. He researches youth culture China and Japan, and the foreign communities in Shanghai and Tokyo.