NATO increasingly confronts an existential crisis, reflected by three mutually reinforcing trends – inconsistent and fast-paced enlargement policy, problematic internal cohesion and inadequate military spending. Researcher Alexander Melikishvili offers cases that point to the challenges NATO faces: The separate quests by Albania and Georgia for NATO admission reveal inconsistent admission standards on democratic governance and rule of law; deteriorating security in Afghanistan shows difficulties in achieving NATO consensus on dealing with the Taliban challenge; and NATO military doctrine, by not considering Russia since 1995 as a source of military threat, fails to protect vulnerable Baltic states. Melikishvili urges the Obama administration to act quickly on comprehensive overhaul and radical internal consolidation, reinvigorating the transatlantic alliance to save it from irrelevance. – YaleGlobal

The military alliance is only as strong and effective as its weakest links
Alexander Melikishvili
Monday, January 26, 2009 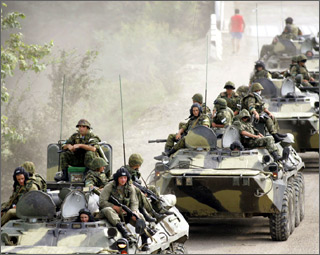 Russians are coming: Russian invasion of Georgia may threaten Europe, but does

not increase its eligibility for NATO membership

WASHINGTON: As events of the past year demonstrate, NATO faces an existential crisis, reflected in the three aspects underpinning its operations – an inconsistent enlargement policy, diminished internal cohesion and inadequate military planning. Unless NATO can overcome these weaknesses, excitement in Europe about a new era of cooperation with an Obama-led United States may turn out to be premature and groundless.

Lost among diplomatic platitudes is the real question of what actually constitutes the set of criteria by which Brussels deems one country to be eligible for NATO membership while another is not. A comparison of Albania and Georgia highlights NATO’s dysfunctional enlargement process of late, raising serious questions about NATO prioritization in membership considerations. 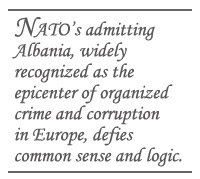 At the last NATO summit in April 2008, alliance members unanimously decided to extend membership to Albania. The “Solomonic” wisdom behind admitting Albania, widely recognized as the epicenter of organized crime and corruption in Europe, defies common sense and logic, pointing towards NATO’s double standards with regard to arbitrarily adjusting membership criteria on a case-by-case basis.

The unstable character of the Albanian state was highlighted on the eve of the summit: In mid-March a massive explosion at the munitions decommissioning facility just 15 kilometers west of the Albanian capital, Tirana, killed dozens, wounded hundreds and displaced thousands of people. This tragic incident led to the resignation of Albanian Defense Minister Fatmir Mediu, also implicated in an illegal arms-trafficking case. According to details of an ongoing federal investigation, in 2007 Florida-based defense contractor AEY Inc. illegally supplied malfunctioning Chinese-made weapons and munitions from Albanian stockpiles, to the Afghan Army, under terms of a multimillion-dollar Pentagon military-to-military assistance contract. 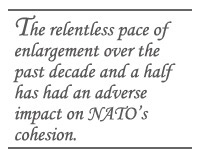 There’s only one explanation for this discrepancy, and it’s rooted in the combination of guilt of NATO bureaucrats over Albania’s wait in the membership-action antechamber – since 1999 – and US insistence, an unusual byproduct of American involvement in the Balkans in the aftermath of Yugoslavia’s bloody dissolution. Inconsistencies reflected in the selective membership dispensation undermine the founding principles and credibility of the NATO alliance as a whole.

Moreover, the relentless pace of enlargement over the past decade and a half has had an adverse impact on NATO’s cohesion.

This is particularly evident in the emergence of factions within NATO that led former US Secretary of Defense Donald Rumsfeld to draw distinctions between the “Old” and “New” Europe. His successor, Robert Gates, was more diplomatic in his remarks, but frustrated by an inability to elicit adequate troop commitments from European allies for the Afghanistan stabilization campaign, he too warned of the “two-tiered alliance” in which some members are more willing to fight than others.

Several cycles of enlargement clearly had a debilitating effect on NATO’s collective decision making mechanism because the sheer number of voting members grew to the current 26 (or 28, with Albania and Croatia expected to formally join the alliance by April), which invariably complicated policy formulation. Furthermore, deep resentment felt by a number of Western European governments towards the Bush administration in the aftermath of the Iraqi invasion further exacerbated tensions with former Warsaw Pact countries vying for Washington’s attention.

Nowhere have the growing cleavages within the alliance been as evident as in Afghanistan, where NATO maintains 50,000-strong contingent under the aegis of the UN-sanctioned International Security Assistance Force. Since August 2003, when NATO took command of the ISAF, this out-of-area operation has repeatedly tested the limits of allied military cooperation in addressing the security challenges in Afghanistan. The US increasingly faces difficulty in forging NATO consensus on the most pressing issues concerning security in Afghanistan. What else can explain that it took close to five years for the allies to reach an accord authorizing military attacks on the country’s burgeoning underground opium-heroin industry? For years, regional experts issued dire warnings that profits from poppy cultivation, which according to UN estimates now account for at least half of Afghanistan’s gross domestic product, support the Taliban comeback. 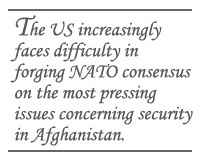 At the October meeting of NATO defense ministers in Budapest, the allies finally hammered out an agreement to authorize military force against Afghan drug lords. However, the NATO members that customarily favor restrictive caveats regarding deployment of their forces, including Germany and Italy, insisted on including a provision that effectively cuts the agreement at its knees. The provision states that attacks on the Afghan narcotics industry will occur only with explicit approval of the respective national governments. In effect, the agreement allows some NATO members to basically opt out of the operations that put their troops in harm’s way.

What’s striking is the apparent lack of realization on the part of some European allies that NATO’s failure in Afghanistan will deal a deadly blow to the alliance and may even spell its demise.

Britain, the staunchest US ally in NATO and the second largest contributor of troops in Afghanistan, went further in criticizing the inexcusable passivity of some European states. Addressing the conference “NATO at 60: Towards a New Strategic Concept” on January 15, British Defense Secretary John Hutton issued the strongest rebuke, openly accusing some NATO nations of “freeloading on the back of U.S. military security.”

Meanwhile, from details leaked to the press by members of the Obama administration, it appears that parameters of new strategy towards Afghanistan will be unveiled at NATO’s 60th anniversary summit in France in early April. Obama plans to capitalize on his popularity in Europe to press allies for increased military and financial contributions, crucial considering Afghanistan’s elections this fall. 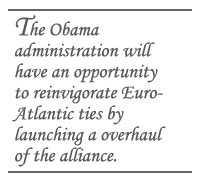 The lack of adequate military preparedness is the third factor that makes NATO irrelevant. Russia’s actions in Georgia had direct implications for the European security and underscored the importance of contingency planning on the part of NATO. Since 1995, as a matter of official policy doctrine, NATO has not considered Russia a potential source of military threat. Ironically by bullying Georgia, Russia made its perennial fear of Western military encirclement a self-fulfilling prophecy as NATO is taking steps to ensure the security of its most vulnerable members – the Baltic states of Estonia, Latvia and Lithuania. It’s long been an open secret that airspace above these countries is protected by only four fighter jets. NATO planners belatedly scramble to devise plans to defend these countries from possible Russian military incursion.

Unburdened by the toxic legacy of disagreements over the invasion of Iraq, the Obama administration will have an opportunity to reinvigorate Euro-Atlantic ties by launching a comprehensive overhaul of the alliance. Unless NATO undergoes radical internal consolidation, it risks becoming increasingly vulnerable and ultimately extinct.

An integral part of this process must be emphasis on increasing force projection capabilities to strengthen NATO’s deterrent potential. Ever respectful of brute force, the Kremlin should know that the costs of tempering with the tripwires along Russia’s European periphery will outweigh any benefits, both imagined and real.

1 The Council of Europe's "Organized Crime Situation Report 2005" cites the findings of the Europol's "2005 European Union Organized Crime Report" according to which, "Ethnic Albanian criminal groups pose a significant threat to the EU because of their involvement in drug trafficking, THB [trafficking in human beings] and money laundering." See: Council of Europe, Organized crime situation report 2005, December 2005, p.50, http://www.coe.int/Report2005E.pdf. Moreover, according to the March 2008 report by the UN Office on Drug and Crime, Albania "investigated more organized crime suspects per capita in 2003 than Italy." See: UN Office on Drug and Crime, "Crime and Its Impact on the Balkans and Affected Countries," March 2008, p.12, http://www.unodc.org/documents/data-and-analysis/Balkan_study.pdf. According to the same report, "ethnic Albanian heroin trafficking is arguably the single most prominent organized crime problem in Europe today," p.13.

2 For more information on the controversy surrounding the AEY Inc. and its maverick 22-year-old president Efraim E. Diveroli, see: C.J.Chivers, "Supplier Under Scrutiny on Arms for Afghans," The New York Times, March 27, 2008, and C.J.Chivers and Eric Schmitt, "Finding of Fraud Led to Suspension of Company Supplying Arms to Afghanistan," The New York Times, March 28, 2008.

Alexander Melikishvili is a research associate with the James Martin Center for Nonproliferation Studies, the Monterey Institute of International Studies, in Washington, DC. The opinions expressed in this article do not reflect the views of either organization.