Through three decades’ development, basketball has attracted an annual Chinese audience of more than 800 million, creating a market with billions of dollars revenue. However, one swiftly deleted tweet may threaten all those painstaking efforts. Daryl Morey, general manager of the Houston Rockets, tweeted an image of a slogan supporting Hong Kong’s protesters, and China responded quickly. Some Chinese companies suspended cooperation with Rockets while national broadcaster CCTV and Tencent announced plans to suspend broadcasts of NBA pre-season games in China. National Basketball Association Commissioner Adam Silver tried to appease both sides: He defended Morey’s right to freedom of expression while the NBA suggested the Tweet was “inappropriate.” The public battle forces other multinational companies like Starbucks to take sides in the dispute between China and Hong Kong protesters. Foreign business interests do not want to lose access to the world’s largest market, but they also face pressures and cannot afford to look weak at home. The world is more nationalistic, and sports and patriotism go hand in hand. – YaleGlobal

With one Tweet, NBA gets caught up in the Hong Kong protests and immediately faces a backlash from basketball's biggest international market – China
Eben Novy-Williams
Thursday, October 10, 2019

Read the article from Bloomberg News about China’s response to a Tweet from a NBA general manager.

Read more about how basketball became popular in China when the Houston Rockets recruited Yao Ming in 2002.

Sports, patriotism and nationalism go hand in hand.  Howard Bryant wrote for ESPN in 2013: “The industry that once avoided the complex world now embraces it, serving as the chief staging ground for expressions of patriotism, and has codified it into game-day identity.  A dynamic that was supposed to be temporary has become permanent. The atmospheres of the games are no longer politically neutral but decidedly, often uncomfortably, nationalistic.” 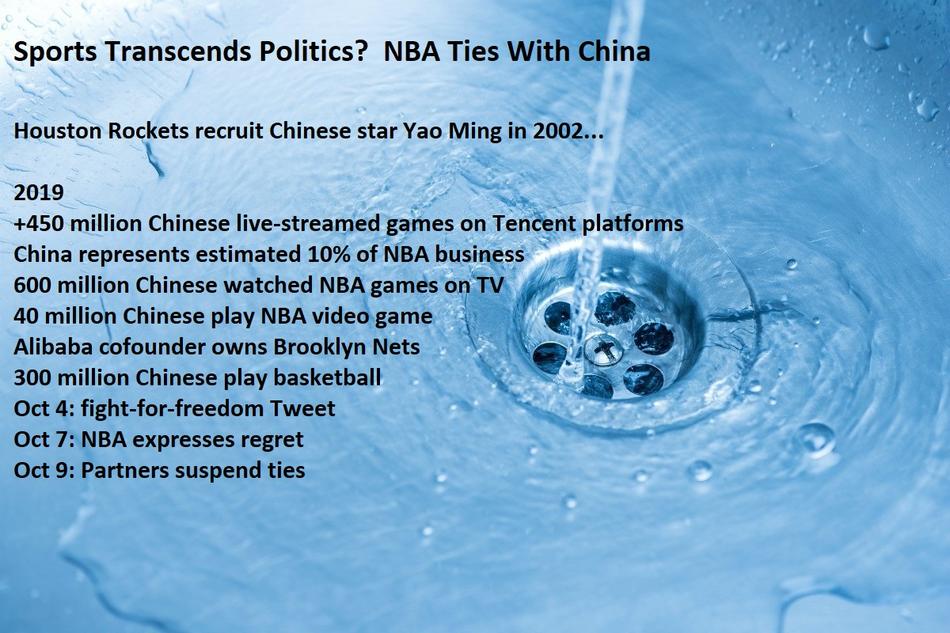