A New Battlefield in Thailand

The beheading of a Buddhist village leader in Thailand's Muslim-dominated south has provoked worry across Southeast Asia. The murder committed by the Islamic separatists was believed to be in response to the deaths of 84 Muslims at the hands of Thai authorities. Although the level of violence is new, the conflict has a long history. In 1832, Thailand annexed the independent Muslim sultanate that now makes up its southern provinces, writes Bertil Lintner, and separatist tensions have persisted since then. Yet as modern telecommunications technology has enabled Islamic radicals to spread their message more easily, Thai separatists have also developed ties with Islamists across the region. For Thailand and its neighbors, the union of separatist and radical Islamic groups constitutes, Lintner says, "a much greater threat to regional stability than the local, isolated separatist movements of pre-Afghan war days." – YaleGlobal

A New Battlefield in Thailand 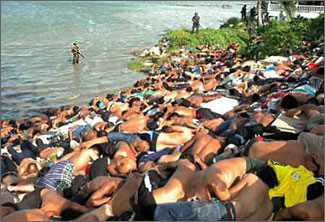 BANGKOK: In early November, a Buddhist village leader was beheaded in Thailand's Muslim-dominated south. It is too soon to say whether this incident was an isolated outrage or the beginning of a wave of revenge attacks for the October 25 deaths of at least 84 Muslims in the hands of Thai security forces. But the bloody incident in Narathiwat has exacerbated the already tense situation in the south – and caused a rift between Thailand and its Islamic neighbor and partner in the Association of Southeast Asian Nations, Malaysia. Many now fear that the Thai Buddhist majority may be drawn into a broader Islamic struggle.

Anti-Malaysian demonstrations were held outside the Thai embassies in Kuala Lumpur, Jakarta, and Dhaka after former Malaysian Prime Minister Mahathir Mohamad suggested creating an autonomous region in the southern provinces as a solution. Elsewhere in the Muslim world, the incident caused an outcry, making headlines for days on www.islamonline.net, an Islamic electronic news bulletin read by Muslims worldwide.

The crisis has also affected Thailand's reputation as a stable recipient of foreign investment and tourism. Immediately after the beheading, foreign investors began selling their Thai stocks, pushing the Stock Exchange of Thailand down 4.6 percent from the week before. On November 1, the Tourism Council of Thailand asked the government to provide training to prepare hotel, restaurant, and other tourism employees for potential security threats.

A hand-written note was found near the beheaded corpse: "This is revenge for the innocent Muslim youths who were massacred at the Tak Bai protest." The Thai government, however, maintains that the protesters were not that innocent. The situation began when the police in Tak Bai arrested six young men suspected of stealing army weapons and giving them to local Islamic militants. A crowd gathered outside the police station, and security forces opened fire and detained more than 1,300 people. Six demonstrators were shot dead, and 78 of those arrested suffocated when they were stacked on top of each other on the back of army trucks. The authorities assert that weapons and hand grenades were seized from the protesters.

Unrest in Thailand's south is nothing new. But authorities are cracking down harder because the nature of the unrest is changing. The three southern provinces of Pattani, Yala, and Narathiwat once formed Pattani, an independent Muslim sultanate populated by ethnic Malays. Even after its Thai annexation in 1932, however, Pattani had its own sultans until 1902, when Abdul Qadir Qamaruddin, the last ruler, was deposed and imprisoned. Pattani was then carved up into three provinces, and administered from Bangkok.

Bangkok has since tried to assimilate the southerners into the Thai mainstream, but with limited success. Armed rebellions led by descendants of the Pattani sultans erupted in 1947 and 1948. And, in 1960, the first properly organized separatist movement, the National Liberation Front of Pattani, was formed. This movement operated from sanctuaries across the border in the newly independent Malayan Federation (now Malaysia) and worked to establish "an Islamic state, based on the Holy Qur'an and the Sunnah." Another group, Barisan Revolusi Nasional was also established in the early 1960s to fight the Thai government, followed by the better known and more militant Pattani United Liberation Organization (PULO), which carried out small-scale guerilla war during the 1970s and early 1980s.

All of these organizations were Islamic, but at that time, the ethnic Malay element was more important. The groups advanced were, in essence, classic separatist movements because they felt dissociated from the country to which they officially belonged.

During the 1990s, the movements became increasingly associated with radical Islam. Purist Wahhabi teachings gained ground in the south's numerous privately-run Islamic schools, and militants who had fought with the mujahideen in Afghanistan returned home. In 1995, the old PULO split, and Afghan war veteran Nasoree Saesaeng founded an entirely new organization, the Movement of Islamic Mujahideen of Pattani (GMIP). The war in Afghanistan and inspiration from Osama bin Laden and his Al-Qaeda network, created a regional brotherhood of militant Islamic fighters. Meanwhile, radically improved communications in Southeast Asia facilitated the exchange of ideas, plans, and funds. According to a white paper on terrorism issued by the Singapore authorities in January 2003, "because of their links with Al-Qaeda, the regional groups have become more radical and extreme in their ideology, methods, and capabilities. They have also blended Al-Qaeda's agenda of global jihad ('holy struggle') against Americans and other enemies of Islam into their own local agendas."

The Thai militant groups are no longer local or isolated. The Thai mujahideen group has links with the radical Malaysian group Kumpulan Mujahideen Malaysia (KMM), which was also established in 1995 by Afghan war veterans. Both groups belong to Rabitat-ul Mujahideen, a regional umbrella organization of radical Islamic groups. This organization, in turn, is linked to Jemaah Islamiah, a predominantly Indonesian organization that masterminded several bombings, including the devastating Bali bombings that killed 200 people. The group subsequently attacked a hotel and the Australian embassy in Jakarta, killing over 20 people.

According to documents seized by Southeast Asian security agencies, the final goal of this "brotherhood" is to establish an Islamic mega-state encompassing Indonesia, Malaysia, Singapore, Brunei, southern Thailand, and the Muslim areas of southern Philippines. This objective comprises a much greater threat to regional stability than the local, isolated separatist movements of pre-Afghan war days.

It is impossible to gauge support for these ideas in the region. But even if adherents form a small minority, their ability to strike has been demonstrated on numerous occasions. More than 400 people, many government officials, teachers, and even Buddhist monks, have been killed this year in southern Thailand – apart from Muslim militants killed in raids by the police and the army.

Moderate Muslim community leaders in Pattani, Yala, and Narathiwat have appealed to the government to seek a political solution to the problem, warning that further repression will breed more terrorism. After the Tai Bak tragedy, Abdullahman Abdulsomat, chairman of Narathiwat's provincial Islamic committee, told the local Thai press, "This is totally insane. Certainly, this will escalate, and who knows what will happen next." Thai authorities have since grown more willing to listen to critics. Recently Lt-Gen Pisarn Wattanawongkeeree was removed as army commander in the south to await the outcome of an official inquiry into the killings. But a similar inquiry into an incident at a mosque in Pattani on April 28, when the army killed about 100 Muslim youths, has shed little or no light on what actually happened that day.

Thai authorities may find themselves in a no-win situation in the wake of the recent beheading. Another watered-down report could yield disastrous consequences. And a frank admission that excessive violence was used to suppress the demonstration may also ignite violence. In either case, the November 2 beheading of the Buddhist village leader could indeed mark the start of a vicious spiral of violence by militants.

Bertil Lintner is a journalist based in northern Thailand and the author of seven books. The most recent is “Great Leader, Dear Leader: Demystifying North Korea Under the Kim Clan.”