A New Coalition To Keep WMD Out of Terrorists’ Hands

Current arms control treaties make it easy for countries like North Korea and Iran to import the materials needed to make WMD. Yet despite widespread fear about terrorism, observes correspondent Michael Richardson, no effective international laws exist to prevent the sale or transfer of weapons or related technology to state or non-state actors. To remedy this worrisome loophole, Richardson, writes, early last year the US and other countries formed the Proliferation Security Initiative (PSI) – a coalition designed to give 'teeth' to international agreements. Prior to its creation, the US and other countries trying to halt international shipments of WMD materials and technology relied on "an ad hoc exchanges of intelligence, interceptions, and searches that mostly took place within the territorial waters of concerned nations.” Thanks to PSI, such searches can now take place wherever cargo-carrying ships are reasonably suspect. Some criticize the initiative for its shaky legal foundations, but the initiative is rapidly gaining widespread support. Recent legislation in the UN Security Council may further bolster the legitimacy of the effort by criminalizing the spread of WMD. The hope is, says Richardson, that the PSI will eventually gain the full legal backing of the United Nations so that transfers of WMD materials to terrorists can be halted anywhere in the world. – YaleGlobal

A New Coalition To Keep WMD Out of Terrorists' Hands 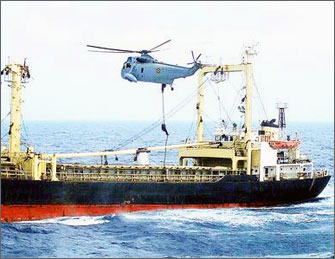 Spanish special forces, shown here descending upon the North Korean ship "So San", are part of the global anti-WMD effort.

SINGAPORE: In the current international climate, the growing menace of terrorism and the risk that weapons of mass destruction will spread are now widely seen as interlocking threats to global security. The challenge posed by terrorist groups and the rogue nations that support them is especially frightening because it disregards national boundaries and threatens a potentially catastrophic scale of casualties if nuclear, chemical, or biological weapons are deployed. Current arms control treaties allow countries like North Korea and probably Iran to import nuclear material and use it to develop clandestine weapons programmes. Alarmed at the possibility of an ever-expanding black market in WMD, the US and several other nations came together last year to form a coalition to block such trade. Known as the Proliferation Security Initiative (PSI), the group is operating outside the framework of the United Nations and the international treaty system.

Despite its shaky legal footing, there is an urgent need for a coalition like the PSI. Since Sept. 11 – and some would argue even before – it has been painfully apparent that the international treaty system put in place after World War II is incapable of preventing the spread of WMD. The nuclear non-proliferation treaty, for example, bans the transfer of weapons and related technology to states, but does not specify restrictions on sales or transfers to non-state actors like terrorist groups. And the treaty may not even be adequate to ensure responsible behavior by states. Most countries have weak or non-existent laws controlling exports of materials that could be used to make WMD. Some have not adequately secured strategically sensitive items within their borders. The PSI is based on the belief that an effective response to the WMD threat will require action on two fronts: a more muscular global enforcement mechanism, including sanctions against violators; and collective action by like-minded nations where the international treaty system fails to apply and the UN cannot muster the will to act.

Before the PSI was established, the US and other countries trying to halt international shipments of WMD materials and delivery systems had to rely on ad hoc exchanges of intelligence, interceptions and searches that mostly took place within the territorial waters of concerned nations. The PSI is likely to become a permanent feature of international arms control precisely because it provides teeth to existing treaties and multilateral arrangements, as well as national export laws on strategically sensitive materials. If these voluntary arrangements fail to halt clandestine WMD programs and shipments, the PSI provides a safety net.

Far from being distrusted as a vigilante organization, the PSI is being enlarged and made stronger by its members because of growing concern that countries or criminal organizations will pass WMD-related materials to terrorists who may use them to attack the US, its allies or other friendly countries. There are now at least 14 core members of the PSI: Australia, Britain, Canada, France, Germany, Italy, Japan, the Netherlands, Norway, Poland, Portugal, Spain, Singapore and the US. But more than 60 countries have reportedly signalled that they support the aims of the PSI and are ready to take part in interdiction efforts on a case-by-case basis.

Despite this strong and growing support, critics hold that a major weakness of the PSI is its limited authority under international law. In an effort designed in part to redress this problem, a resolution to criminalize the spread of WMD was approved unanimously by the UN Security Council last week (28 April), a move which will help legitimate the goals of the group, if not its actions. The resolution calls on member states to stop terrorists, black market traders, and other non-state actors from acquiring WMD or the materials and technology to make or deliver them. While the resolution does not directly give authority for countries participating in PSI activities to seize WMD-related cargos, US officials say that the resolution will make it easier to carry out PSI operations.

The US and its partners are working to further bolster legal arrangements so that they can stop WMD shipments even when they take place outside the jurisdiction of the PSI countries. At sea, national authority extends only 12 nautical miles from the coast. Beyond this, in international waters, the state whose flag a ship flies must expressly consent before foreign naval vessels can legally halt the ship - except in the case of a few “universal crimes” such as piracy, slavery, and unauthorised broadcasting.

In February, however, the US and Liberia announced that they had agreed to new boarding and inspection arrangements on the high seas where either side has reasonable grounds to suspect that one of their ships is carrying items of proliferation concern. Measured by gross tonnage, Liberia has more vessels – over 2,000 – flying its flag than any other country in the world, except Panama. The US can now request the right to board a suspect Liberian-flagged ship anywhere in international waters – and do so after waiting no more than two hours for a response from the register. The US regards this arrangement as a model for similar agreements it is pursuing with a number of other key flag states.

British Foreign Secretary Jack Straw said that together with its PSI partners, Britain was considering whether to introduce new penalties to deter shipping and air lines from seeking to move WMD cargoes. “Might the vessels and planes of any companies found to have engaged in such transport be denied landing or port rights around the world?” he said. “Should we consider an international register of companies and individuals convicted of proliferation offences?”

Well before this, PSI members were taking preemptive action wherever they were able to do so legally. For example last August, in response to a US request, Taiwanese officials confiscated about 150 barrels of phosphorus pentasulphide from a North Korean freighter, Be Gae Bong, in the Taiwanese port of Kaohsiung before it left for North Korea. The chemical is used to make insecticide and as an additive in motor oil. But it can also be used to manufacture nerve gas.

However, the most important PSI seizure made public so far was the interception by German and Italian authorities in October 2003 of the BBC China, a German-owned ship, after it passed through the Suez Canal bound for Libya. In Dubai, equipment that could be used to enrich uranium for nuclear weapons had been loaded onto the ship. Labelling on the packing cases showed that the sophisticated components had been precision-made at a factory in Malaysia, which claimed later it thought the equipment was for the oil industry. The parts had been identified and tracked by US and British intelligence.

The confiscated equipment from the ship helped unravel and shut down an extensive and long-running nuclear black market based in Pakistan that peddled weapons technology to Libya, Iran, North Korea, and perhaps other places. It also put pressure on Malaysia, the United Arab Emirates and, indirectly, on other governments, to tighten their laws and enforcement.

PSI members insist that they are part of an activity, not an organization. But as more governments realise that proliferation and nuclear terrorism are a common global threat, it may be possible not just to enlarge the membership of the group but to codify its work in an effective international treaty.

Michael Richardson, a former Asia editor of the International Herald Tribune, is a visiting senior research fellow at the Institute of Southeast Asian Studies in Singapore. His book, A Time Bomb for Global Trade: Maritime-related Terrorism in an Age of Weapons of Mass Destruction, will be published by ISEAS on 11 May, 2004.