Genetically modified (GM) food offered as aid by the US is not simply manna from the heavens for people in famine-stricken countries, says Yale scholar Kathleen McAfee. African nations have refused GM food aid from the US not just because they fear losing access to the European Union market, where imported GM foods are subject to substantial restrictions. They also worry about environmental contamination from unmilled GM grain, and about health safety and longer-term effects on their domestic agriculture. If the US is sincerely concerned about these countries in crisis, McAfee concludes, there are other, less worrisome ways to assist them. - YaleGlobal

US advocacy of genetically modified food pits it against many countries
Kathleen McAfee
Friday, June 6, 2003 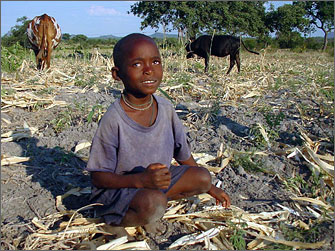 A Zimbabwean boy in a cornfield: Will the US insistence on sending GM food to Africa bring more disaster? (Photo: CARE)

NEW HAVEN: The dispute over whether countries may decline imports of genetically engineered seeds and foods, long a point of contention between the United States and many developing countries, now strains US-European relations as well. On May 13, to the dismay of diplomats on both sides of the Atlantic, the US announced that it will file a complaint against the current EU moratorium on genetically modified food, which has kept such food away from European store shelves.

A week later, President Bush charged the European Union with contributing to hunger in Africa by blocking imports from the US of "high-yield bio-crops", which he called "more productive." The US Trade Representative, Robert Zoellick, has called the EU policies "Luddite", "immoral", and an unfair trade practice harmful to the United States. This looming battle over GM food trade reflects an intensifying struggle between government-backed US agri-business and farmers worldwide.

Although often portrayed as a debate about science, also at stake are issues of environmental risk and economic and cultural sovereignty. Will countries and farmers in a globalized economy retain any choice over what they eat, what they produce, and what kind of agriculture systems they employ? 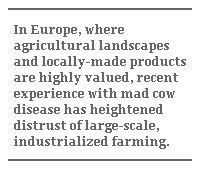 Present EU policies restrict GM food imports and the release of genetically engineered living organisms into the environment. Revisions now under discussion would allow GM imports but require that they be so labeled. In Europe, where agricultural landscapes and locally-made products are highly valued, recent experience with Creutzfeldt Jacobs (mad cow) disease has heightened distrust of the products of large-scale, industrialized farming. A Pew Research Center survey found that between 70 and 89 percent of West European consumers are wary of GM foods. US government critics contend that these attitudes are irrational and that EU regulations are not based on scientific evidence of health or environmental risks.

Further, these critics charge, developing-country governments are forced by the need for European markets for their exports to adopt anti-GM policies that are against the interests of their own peoples, as when Southern African governments rejected famine relief in the form of American genetically modified corn late last year. Few African exports to Europe would be actually affected by current EU rules, with the possible exception of beef from Zimbabwe if the animals were fed GM grains.

When they declined US GM food aid, however, Southern African governments had other concerns. One was the possible health risk of consuming unprocessed GM corn, which is not a major part of US diets. The other was the unknown consequences of releasing GM corn into agro-ecosystems in Southern African, where corn is the main staple grain, and where some of the unmilled grain offered by the US was likely to be planted by local farmers. 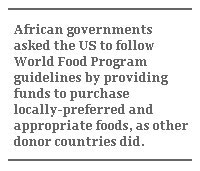 Until these concerns could be addressed, African governments asked the US to follow World Food Program guidelines by providing funds to purchase locally-preferred and appropriate foods, as other donor countries did. Zimbabwe later agreed to accept GM grain so long as it would be milled so it could not be planted, but Zambia, after sending a fact-finding delegation to Europe and the US, did not.

The US argument that such policies are "immoral" takes as a given that GM crops have been proven to be free of significant health or environmental hazards. It also presumes that GM crops would reduce African hunger because they yield more than conventional varieties. In fact, average yields from currently-available GM food-crop seeds are slightly lower than yields of comparable non-GM varieties. This is not surprising, because GM crops have been designed mainly to deal with pest problems, not to produce more food.

Crop genetic engineering is a long way from developing varieties that could produce more food under African conditions, although researchers supported by the Rockefeller foundations are hoping to do so in the future. Meanwhile, transnational biotechnology/agrochemical firms, which have patented much of current genetic-engineering technology (as well as genes), have little incentive to invest in developing crops for countries where farmers are too poor to buy premium seeds and agrochemicals. Public-sector plant breeding programs often cannot afford the rights to the privatized technologies and genetic data sold by private firms.

In any case, lack of quality crop varieties is not the major obstacle to African food production; the bigger problems in Africa are poor roads and storage facilities, lack of credit and fertilizer, degraded soils, labor shortages, and farm prices depressed by imports of cheap food from the U.S and Europe, where agriculture is heavily subsidized.

In addition, the environmental-risk question is proving more vexing than GM enthusiasts first thought. Genetic constructs from corn, it turns out, can travel much farther from their fields of origin than US regulatory officials had assumed. Synthetic gene constructs from GM corn can become incorporated into the genomes of other corn varieties with effects that are poorly understood. Some scientists worry that synthetic genes and their products may contribute to the loss of vital maize genetic diversity, or that they may damage soil microbes and other organisms that keep agro-ecosystems productive. Advocates of a precautionary approach point out that once released into nature, engineered genes cannot be recalled.

It has also become clear that weeds and insects can evolve in a few years to become resistant to the pesticides associated with GM crops. (Most currently-available GM crops either produce insecticides in their tissues or depend for their efficacy upon spraying with herbicides.) For the one crop - cotton - for which GM varieties have required less toxic spraying, this environmental gain may only be temporary. Until these ecological problems have been solved, countries may reasonably prefer not to accept GM seeds.

The US Department of Agriculture, the Agency for International Development, and the Trade Representative's office have nonetheless made the promotion of GM crops a policy priority. In addition to the WTO case, the US has fought hard against the Cartagena Protocol on Biosafety, a new global treaty that will give countries the option to decline GM seed imports if they are shown to pose ecological or socio-economic risks.

US-based agribusiness firms, unlike their European and Canadian counterparts, have been unwilling to keep GM grains separate from non-GM crops. Agricultural exports are important to the US trade balance, and agribusiness interests have political clout. Promoters of US farm exports (GM and conventional) argue that low-income countries that are losing their food self-sufficiency as food markets become global are actually better off because their farming systems are inefficient.

However, flooding world markets with the products of US agriculture creates dangerous patterns of dependence, puts farmers in developing countries out of business, undermines rural communities, and rarely helps the hungry. Until the United States is prepared to offer Africa what it really needs to overcome famine - support for infrastructure, inputs, marketing, fair pricing, and farmer-centered research on sustainable farm management and local crop improvement - it should refrain from lecturing anyone about morality.

Kathleen McAfee is Assistant Professor of Geography and Sustainable Development at the Yale School of Forestry and Environmental Studies.