Ten years after the genocide in Rwanda began, is the international community better positioned to prevent another such horror from occurring elsewhere? The deaths of 800,000 Rwandans should have taught the world much, say Michael O'Hanlon and Susan Rice, senior fellows at the Washington-based Brookings Institution. In 1994 the US, France, and the UK failed to muster the political will to prevent or stop the killing in Rwanda. And since taking office the Bush administration has cut US funding for the training of African stand-by brigades. Recognizing the disastrous consequences of their earlier disregard, in February of this year the European Union pledged both money and personnel to support the development of African troops who could respond to future conflicts and act as peacekeepers. Now, the authors say, the US needs to take a step in the same direction. With a commitment of $100 million a year, the US could help train multinational African troops and stave off future crises in Africa. Such an effort, the authors argue, is necessary not only for humanitarian reasons but also for the added security it would bring to Americans. After 9/11, they argue, no one should doubt that problems in failed states overseas can easily become problems for Americans at home. – YaleGlobal 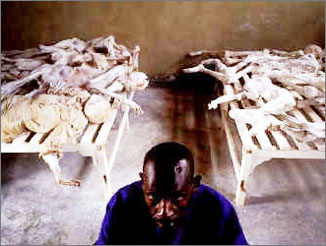 A survivor of the Rwandan genocide with the remains of a less fortunate group: Will the US join Europe in developing a force to prevent another such tragedy in Africa?

WASHINGTON: As Iraqis prepare to celebrate the one-year anniversary of their liberation from Saddam Hussein's terrible rule, many Africans will commemorate a far more somber date – the tenth anniversary of the start of the Rwandan genocide, which began April 6, 1994, and killed at least 800,000 innocent men, women and children.

As many, including President Clinton, rightly acknowledged, neither the international community, nor neighboring states, nor the United States did enough to prevent or halt that horrific tragedy.

In particular, the world faced a dilemma in 1994: since only a very small number of countries had the capacity to do anything quickly enough to stop the genocide, the international community looked primarily to the United States, United Kingdom, and France to act. But, when it mattered most, none of those countries had the will to act. Some have alleged that it would have taken little more than a modest reinforcement of the existing UN peacekeeping mission in Rwanda prior to the initiation of the massacre to prevent it. While one can debate that point (we are dubious), the fact remains that not all genocides will be foreseeable or foreseen. Nor does foresight guarantee effective international response. Both increased political will and greater military capacity for intervention are needed to ensure that the response to future problems does not depend so completely on a very small number of countries.

The UN Security Council needs to be able to call upon enough well-trained and equipped troops from a number of different countries to respond swiftly – at most within two to four weeks – to another genocide or similar humanitarian crisis. Effective peacekeeping missions cannot be cobbled together over a period of months by taking a few hundred troops of limited capability and with inadequate equipment here, a few hundred there. Time is of the essence when dealing with acute humanitarian crises or genocide. Top-notch, well-equipped, well-trained, and quickly-deployable troops are a must.

Recognizing these facts, the Clinton Administration launched in 1996 a program called the African Crisis Response Initiative (ACRI) to build African capacity to respond to such crises. The goal was to train and equip seven to ten interoperable battalions who could undertake complex humanitarian interventions effectively. More than 10,000 troops from Senegal, Uganda, Malawi, Mali, Ghana, Benin, Cote d'Ivoire, and Kenya have now been trained under this program and its successor. Later, the Clinton administration also conducted Operation Focus Relief, a temporary but major program to prepare West African units for service in Sierra Leone. These steps marked a modest, but important start based on the right vision.

Despite this start, ten years after the Rwandan genocide, the international community still has no viable and robust military capacity at the ready. Should another genocide erupt somewhere tomorrow, there may be no country both willing and able to answer the call for help. The African forces trained by the United States under the ACRI program, for example, have mostly been prepared for relatively benign environments in which ceasefire accords have already been negotiated.

With US attention and most of the world's rapidly deployable military capacity committed to Iraq, Afghanistan, and the Balkans for the foreseeable future, the international community is less well positioned to respond to a humanitarian emergency in Africa or elsewhere than it was ten years ago. A case at hand is Sudan. As government-sponsored ethnic cleansing and killing intensifies in the city of Darfur, the world community has little immediate leverage over that country's government, because it is patently obvious that the few countries with the capacity to stop the violence have absolutely no will to do so.

Indeed, the problem is also affecting how the international community manages other serious humanitarian crises in Africa today. Although some civil conflicts have been mitigated or ended in Africa in recent times, most notably in Sierra Leone and Angola, serious problems remain. The current UN peacekeeping mission in Congo, for example, numbers only about 10,000 troops, even though that country is more than twice the size and population of Iraq (where 150,000 foreign soldiers are deployed) or ten times that of Bosnia (where up to 50,000 have been deployed and where more than 10,000 remain nine years after the ceasefire accord was signed).

Thankfully, even as the United States is consumed by Afghanistan and Iraq, Europe has not forgotten Africa. During a February summit of the African Union, the European Union pledged $300 million towards the creation, training, and equipping of five regional, multinational stand-by brigades. The goal is that they should be able to handle traditional peacekeeping by 2005 and more complex peace enforcement or intervention missions by 2010. Principal credit must go to African nations themselves, who led in establishing the brigades, having learned from 1994 that certain human rights abuses are so extreme as to require external intervention in the internal affairs of sovereign states.

The idea of five rapidly deployable stand-by brigades, built from battalions of individual countries but each led by a multinational headquarters with adequate support elements, is precisely the right one. One such brigade, with 2,000 to 3,000 troops, could protect a threatened city or refugee camp or patrol a cease-fire line. Acting together, several of the brigades could even help forcibly to quell mass killing as in Rwanda a decade ago.

While Europe's support for this African Union initiative is extremely welcome, it is a shame that the United States is effectively standing by while it occurs. In fact, just when the Clinton Administration's capacity-building programs were poised for major expansion, the Bush administration cut them back. ACRI's modest annual funding level of $15 million was reduced to $10 million. The funding was later restored to a new program, African Contingency Operations Training Assistance (ACOTA), but not increased as necessary. ACOTA usefully offers more lethal training but does little to create interoperable, rapidly deployable international response capacity.

On the 10th anniversary of Rwanda, the United States should take the opportunity to follow Europe's lead and help the African Union. To make a real difference, the US should accelerate the schedule for readying the five African stand-by brigades by providing them more substantial and sustained training and equipment. The United States should also help to ensure high standards of civilian control of the military, human rights practices, and other key attributes of any military that is being given enhanced lethality by the international community. A serious US effort would require resources in the range of $100 million a year.

The humanitarian imperative for action is sufficient reason to pursue this agenda. But the argument is not humanitarian alone, especially given al Qaeda's proven presence from Somalia to Kenya to West Africa. In the aftermath of 9/11, how many more reminders do we need that what happens inside failed and failing states can matter enormously for our own security as well?

Michael E. O’Hanlon and Susan E. Rice are senior fellows at the Brookings Institution; Rice was US Assistant Secretary of State for African Affairs from 1997 through 2001.