Uncertainty and infighting await nations that lack a strategy for leadership succession. The Kim family has ruled North Korea since it declared independence in 1948, but Kim Jong Il has not groomed his children for leadership. So speculation centers on them along with Kim’s fourth wife, Kim Ok, who visited Washington during the waning days of the Clinton administration. Analysts anticipate an attempt at collective leadership, and Seoul journalist Shim Jae Hoon suggests that military leaders, family members including wives or in-laws, and bureaucrats will collide to maintain control of the isolated, poor nation. North Korea’s neighbors continue to press for economic reform and an end to nuclear-weapons development, but must first determine who exactly controls the country of more than 23 million desperate people who do not know about the health of Kim Jong Il or the country’s next step. – YaleGlobal

The world wonders as citizens of the Hermit Kingdom are in the dark
Shim Jae Hoon
Friday, September 26, 2008 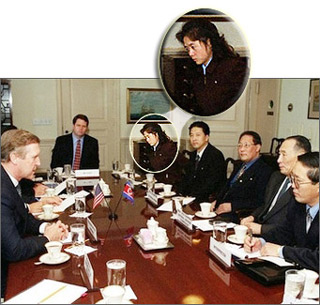 SEOUL: Under threats of a second famine in less than a decade, North Korea confronts a potentially debilitating political crisis of power succession. With its supreme leader Kim Jong Il reported to be gravely ill with a stroke, a pall of uncertainty hangs over the country’s future relations with its neighbors.

Days have passed since he missed reviewing a troop parade on the 60th anniversary of the founding of the regime on September 9, and news of Kim’s hospitalization, reported by US and South Korean intelligence, has yet to be officially broken to 23 million North Koreans.

Intelligence officials in Beijing, Seoul and Washington conclude that Kim, 66, has had a brain surgery or a bypass, conducted by a team of foreign doctors in North Korea. He is said to be recovering, regaining consciousness and ability of speech, but one well-informed Chinese official, according to press reports, concluded that even if Kim recovers, it’s doubtful that he could resume leadership.

If Kim misses the next key event, a troop parade marking the October 10th anniversary of the founding of the party, it would amount to a conclusive proof of serious illness. More officials in Seoul anticipate the curtain closing on the long-running Kim dynasty.

In the view of most experts here, the post-Kim power structure can either continue dynastic succession or entail collective leadership, a coalition of power maintained by the party and military figures.

Most observers discount the likelihood of dynastic succession, with one of his sons following the pattern of Kim Jong Il’s own succession of his father, the state founder president Kim Il Sung who died in 1994.

Kim has three sons with two former wives. The eldest, Kim Jong Nam, 37, who has a reputation of being a playboy was caught entering Japan on a forged passport. The father is still said to be furious over the incident, Jong Nam has since been banished to a life of semi-exile in Beijing, Macau and Hong Kong, with North Korean spies watching his every move.

Not much speculation focuses on obscure Kim Jong Chol, 27, the second son, said to suffer from some illness. His brother, Kim Jong Un, 25, remains a darling of his father, according to South Korean intelligence analysts, but too young for any state posting.

None of the sons have had the training and exposure that their father had for 20 years before formally assuming power following his father’s death. Kim Jong Il has held the top post now for 14 years, out of the total of 64 years that the Kim dynasty has ruled North Korea. With that record of family longevity in power, the post-Kim system must accommodate one or two family members in the new collective system. Kim Jong Il undoubtedly has had such family continuity in mind for some time. A North Korean delegation that visited Washington in the waning days of the Clinton administration surprisingly included Kim Ok, his fourth wife, described as politically alert and ambitious, eager to back her stepson Kim Jong Un in any power succession scheme. She herself could join the collective leadership.

Another key relation almost certain to be included from the party’s side is Chang Song Thaek, 64, married to Kim Jong Il’s sister. He has background in the party’s work in organization, economic management and security affairs. His wife is current minister in charge of light industry.

Whatever shape it takes, the post-Kim power structure will be watched with keen attention in Beijing. For the last three decades, China – from Deng Xiaoping to Hu Jintao – has consistently backed Pyongyang taking the course of economic reform and opening. China also opposes the North developing a nuclear arsenal or long-range ballistic missies. Now that these weapon systems are under serious development in the North, with which Beijing shares a 1,300-kilometer border, China would have to keep a close tab on their progress

In the interest of promoting stability on the Korean peninsula, China cooperates to a significant degree in pushing for denuclearization of North Korea. As for Seoul, it hopes to restart inter-border talks with the North, in the hope of avoiding any friction that can indirectly bolster hardliners in Pyongyang. Seoul is thus expected to restart its food aid, softening an earlier position that it would withhold aid unless the North agreed on denuclearization. At the same time, the US is committed to delivering half a million tons of food aid, to encourage the North to accept a verifiable inspection of its nuclear facility in Yongbyon, now shut down and in the process of dismantlement under the February 2007 agreement at the Beijing Six-Party talks.

But the possibility of a political vacuum in Pyongyang complicates denuclearization. Days before rumors surfaced of Kim’s hospitalization, the North Korean foreign ministry issued a statement abruptly stopping its “disabling” work on its reactor. The action has triggered speculation that the North Korean military, responding to the crisis of Kim’s surgery, ordered the suspension, instigated by the military leaders in the powerful National Defense Commission. This response could foreshadow difficulties in the operation of the junta-like collective leadership system, bringing military hardliners at loggerheads with civilian party leaders who have conducted diplomatic talks at Six-Party meetings in Beijing. Depending on the situation, military hardliners could checkmate civilian initiatives from the party. Disabling of the nuclear facility weakens the military in the internal power structure.

The US and South Korea, while anxious to see the North avoid any political complications on the way to consolidation of a new leadership, remain committed to seeking denuclearization. Japan, for its part, is eager to move on to talks about the still unresolved cases of abduction of its citizens. This plus the security threat posed by the North’s achievement in the production of long-range ballistic missiles have deepened Tokyo’s concern.

For South Korea and China, the prospect of changing of the guards in North Korea – or for that matter in the event of eruption of a naked power struggle – is of special interest. While China stands worried that any power struggle between rival military factions could result in a massive refugee outflow across its border, thus requiring some intervention, South Korea is wary of any scenario resulting in untimely territorial reunification, such as what happened in Germany after the 1990 collapse of East German regime. Staggering economic and social costs of German reunification has made a gradualist approach a firm national consensus in South Korea. 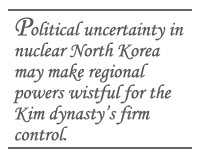 Long-term security jitters have effectively precluded any possibility of South Korea intervening in the North’s political upheavals. Rather, Seoul maintains close consultation with Beijing and Washington hoping to indirectly manage potential crisis. In Seoul, few analysts see the possibility of armed power struggle openly flaring up in the North, with refugees flowing south across the border. Yet, political uncertainty in North Korea, with its nuclear arsenal and missile technology, its 1.1-million- strong army and a population long indoctrinated against capitalist enemies may be making regional powers wistful about the time when Kim dynasty was in firm control.

In the past one complained about the unpredictability of North Korean leader Kim Jong Il, who was often called crazy as a fox. Now with him suddenly vanishing from the public view, Seoul, Beijing and Washington have become painfully aware of the stabilizing influence he has had in the power system. Without Kim Jong Il, North Korea is poised to enter uncharted territory with unpredictable and potentially grave consequences for the world.