‘North Korea is a Symptom of a Larger Problem’

While terrorism continues to preoccupy Western countries, some security thinkers worry about the disintegration of the non-proliferation regime. North Korea has withdrawn from the nuclear Non-Proliferation Treaty (NPT), and Iran may follow suit. In an interview with YaleGlobal Editor Nayan Chanda, President of the International Crisis Group and former Foreign Minister of Australia Gareth Evans said, "North Korea is just a symptom of a larger problem of potential proliferation of weapons of mass destruction." He maintains that a number of regimes believe their best chance of not being attacked by the US is to develop a nuclear capacity of their own. "In that sense," he says, "the casual talk about preemptive strikes and that whole strategy that we had seen to work in Iraq has been quite counterproductive to the larger objective." Another reason why the NPT is collapsing is that countries like India view possession of nuclear weapons as "one of the badges of 'big guy' status in the world." Unless the US and others demonstrate their commitment to ultimately eliminating nuclear weapons, he argues, the problem of a weakening non-proliferation regime cannot be resolved. The problem of Iran's temptation to break out of the NPT, too, will be hard to resolve, he says, without acknowledging the reality of "Israel's... quite formidable nuclear armory." This interview was conducted in New Haven on September 26, 2003. Excerpts from the interview are presented here. - Yaleglobal

'North Korea is a Symptom of a Larger Problem' 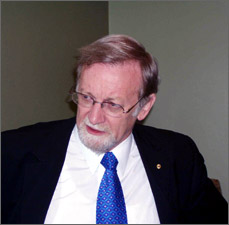 Nayan Chanda: Two years into the War on Terror the world is a more dangerous place. Why is that so?

Gareth Evans: Well, we are not doing particularly well in terms of fighting the War on Terror. There has been more war and more terror. [There are] two other problems which make the world a scary place. The second is the...apparent proliferation of weapons of mass destruction and the disintegration of non-proliferation regimes which had held together remarkably well for the last generation and in particular as far as nukes are concerned. And the third big problem is the problem of collapsed, failing, failed, warring states, which continue to be not only a huge risk to their own people but a source of concern to the rest of the world.

Chanda: Would you agree with the Indonesian President Megawati Sukarnoputri who just warned in the UN last week that the United States' policy is increasing the alienation of the Islamic people from the United States and the West?

Evans: Well, terrorism feeds all those political grievances; it feeds to some extent on economic, social, and cultural grievance, but [terrorism flourishes] only when those grievances become encapsulated in people's minds as a kind of political framework. The biggest lesson we have learned, or should've learned... is that unless you systematically, seriously address those essentially political grievances... you are not going to be able to confront effectively this phenomenon. In particular, you are not going to be able to create in the frontline states themselves - those where terrorist activity originates - the capacity and the will to deal with this phenomenon. We have seen this in the Palestinian occupied territory; we are now seeing this happening in Iraq, where a new set of grievances have come to fill the vacuum... In the Middle Eastern context it's hard to deal with because you've got the big unresolved political problems like Israel-Palestine and so on that are just feeding this. You've got the performance of the US in post-conflict Iraq feeding this, you've got the whole problem of the US dealing with authoritarian regimes in the Arab world feeding this. Until that feeding process somehow is reversed, we are going to continue have a major problem.

Chanda: When you say the US dealing with the authoritarian regimes in the Middle East, what you mean is that the US support for these regimes is generating some antipathy for the US?

Evans: Of course in the context of 9/11 [antipathy for the US] was far more a motivator for the individuals immediately involved than any sense of general economic malaise or any particular concern for the plight of the Palestinians. Here it was a real resistance to the US presence on the holy soil which was, of course, linked to the whole longstanding US strategy of supporting… regimes that are not particularly attractive to their own people. What we have to do is recognize the necessity to address these underlying forces, not just focus on military action, not just focus on punishment, not just focus on finding the perpetrators because you might be able to find them but in process you are breeding new generations to replace them.

Chanda: You haven't mentioned Afghanistan, and it looks like the Taliban is coming back strengthened and resuscitated by forces in Pakistan. What's your solution for that problem?

Evans: Well it's a two-fold solution. One is to get the act together in Afghanistan itself with the far more systematic and effective approach to governance and security. The other part of the answer is to be a lot tougher on Pakistan than the West... has wanted to be. There has been far too much willingness to take at face value the protestations of the support for the anti-Taliban cause and anti-Islamic extremist cause and not enough recognition that there are dynamics continuing to be at work within Pakistan that are giving a lot of aid and comfort to these forces.

Chanda: On North Korea, what is your scenario?

Evans: Well I'm some kind of optimistic about the capacity for the current situation to resolve itself, particularly if the neighboring states... can maintain the united front against the North Koreans. It is necessary to adopt a two-pronged strategy - a willingness to be open and constructive, and prepare to deliver something that the North Koreans want, which is basically security of their own, regime protection, and economic support. But at the same time be prepared to be quite tough, and to bring into play the prospect of sanctions and prospect of ultimately some kind of military strike, even though we all know that is hugely dangerous. The worry about the way in which this issue is being handled by the US is there being too much of the latter, the hard stuff, and not enough of the former. But North Korea is just a symptom of a larger problem of potential proliferation... of weapons of mass destruction. What we have to ask ourselves is why this proliferation phenomenon is now coming to haunt us all over again. One [reason] is that a number of these regimes are quite genuine... when they say that the best chance they've got of not being attacked is to move quickly to have a nuclear capacity of their own. In that sense, the casual talk about preemptive strikes and that whole strategy... in Iraq has been quite counterproductive to the larger objective.

Chanda: It encouraged them…?

Evans: It sounds too simplistic to put it that way. It enrages policy makers in Washington if you even hint at this problem. But if you only go look at what these characters are saying in Iran and North Korea and elsewhere you realize that psychologically this is an important element in the gamesmanship that's going on. That leads me to the other main reason that we are seeing this phenomenon... is the reaction of countries who say 'why should we be put in a permanent second rank status when the big guys... have nukes under the existing nuclear non-proliferation regime [and] are being allowed to keep them [and] are just not being serious about even paying lip service to the objective of ultimate elimination.' This was the big problem for India and Pakistan. What this was really about was the psychology of permanent second-rate status. At the same time, the US and others are making no gestures whatsoever to indicate seriousness of purpose for their own obligations under the treaty regime to ultimately eliminate [nuclear weapons].

Chanda: Are we seeing the same thing in Iran? That Iran feels that since Israel is known to have nukes, they have to have them?

Evans: I think that there is an internal debate going on in Iran in which that is one current that we have to acknowledge. This utter unwillingness in discourse about nukes even to acknowledge the reality of Israel's... really quite formidable nuclear armory is just not helping movement on this issue. There is a lot of support within the Arab Islamic world for a genuine nuclear-free zone. You could get very serious dialogue about achieving that result if only Israel was seriously in play as a potential dialogue partner and participant. But it's not.

Click here for a full transcript of the interview.

Gareth Evans is President of the International Crisis Group and former Foreign Minister of Australia.