As North Korea plans to launch a long-range missile, the US threatens sanctions and military intervention. But public policy Professor Chung Min Lee asserts that it may be too late to dismantle North Korea’s nuclear arsenal. Analysts suggest that the country has enough weapons-grade plutonium for a dozen nuclear weapons. Since the early 1990s, North Korea has worked with highly enriched uranium under the watchful eyes of the US, Chinese, South Korean, Japanese and Russian governments. All worry that a preemptive strike could trigger full-scale nuclear war, yet each of the members from the stalled Six Party Talks has its own agenda in regard to North Korea’s nuclear development. Thus, any cohesive plan for dismantling the North Korea program is unlikely. South Korea is in the most difficult position: While the Roh Moo Hyun administration publicly opposes nuclear potential of its northern neighbor, South Koreans generally agree that allowing North Korea to develop its nuclear power is a safer choice than preemptive attack and nuclear war. For now, nuclear capability gives North Korea great bargaining power – and ensures survival of the Kim Jong Il regime. – YaleGlobal 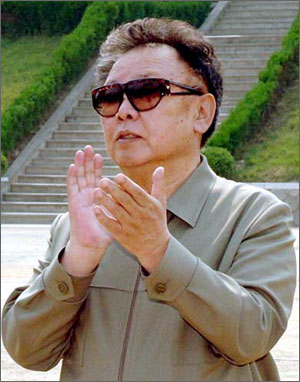 Will he, won't he? The world watches and waits for North Korean leader Kim Jong Il's decision on the test launch of a long-range missile

SEOUL: As the world holds its breath on the possibility of a North Korean long-range missile test – the 7,000-km range Taepodong-2 ICBM – diplomats continue to hope for a breakthrough in the stalled Six Party Talks designed to dismantle North Korea's nuclear weapons program. Yet a more sobering prospect needs to be considered – whether North Korea, for all intents and purposes, is already a nuclear-weapon state.

Absent an underground nuclear test, it is impossible to verify whether North Korea has nuclear weapons. And yet, a growing pool of open-source intelligence estimates, including a June 26 report released by the Institute for Science and International Security and buttressed by cautious official assessments, assert that Pyongyang probably has enough weapons-grade plutonium to make up to 12 or so nuclear weapons. In October 2002, the Bush administration assessed that North Korea was working on a highly enriched uranium nuclear-weapons program in violation of the 1994 Agreed Framework. The world's last Stalinist state may have achieved the pinnacle of its decades-long strategic goal of becoming a nuclear-weapon state.

In February 2005, the North Korean foreign ministry announced that it would "bolster its nuclear weapons arsenal" – the nation's first public admission that it had nuclear weapons. Pyongyang may have made this announcement as a bargaining ploy to extricate even more concessions from the five parties, but especially from the US. Stripped to its essential core, the North Korean nuclear imbroglio boils down to a test of wills between Kim Jong Il and the rest of the world; namely, that if the acquisition of nuclear weapons is coterminous with regime survival, nothing short of war or iron-clad resolve on the part of the other five parties will persuade him to roll back and give up his nuclear weapons. If Nikita Khrushchev blinked during the Cuban missile crisis, the US, South Korea, Japan, China and Russia have been blinking in bits and pieces ever since the North Korean nuclear crisis began in the early 1990s.

From the onset, the North Korean nuclear crisis has posed a fundamental dilemma. Taken to its logical extreme, if one assumes that a North Korea with nuclear weapons is detrimental to the security of South Korea, the US and Japan, it is not beyond reason that some type of a preemptive attack could be considered. Yet such action may likely escalate into a full-scale North Korean retaliation and another catastrophic war. Thus, while it may be unpalatable, many South Koreans prefer living with a nuclear-armed North Korea to pushing the envelope that could lead to war. Avoiding war at all costs – even if North Korea has nuclear weapons – seems to be the preferred strategic calculus of the current South Korean government.

To be fair, the Roh Moo Hyun government has said that a nuclear North Korea is unacceptable. Yet the same government has also intimated that, from North Korea's perspective, pursuit of a nuclear weapons program is not entirely unreasonable. Furthermore, when Washington and Tokyo have warned of consequences – such as taking the issue to the UN Security Council should Pyongyang conduct a missile test – Seoul has demurred. Indeed, many in Washington believe that even if North Korea launches the Taepodong-2, Seoul is unlikely to join in any meaningful sanctions. Given the depth of Seoul's commitment to sustained engagement as the sine qua non of inter-Korean peace, the logic of engagement seems to have permeated into two critical areas: objective intelligence collection and analysis as well as requisite deterrence and defense measures. Ever since the June 2000 South-North summit, public opinion in South Korea has been sharply divided on how to perceive North Korean intentions. North Korea has waged a successful psychological campaign against the South, to the extent that it has hinted at a "sea of fire" if the conservative party wins the presidential election in December 2007. 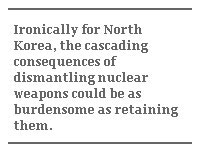 Four basic outcomes can be envisioned vis-à-vis Pyongyang's nuclear weapons: (1) It gives up its nuclear arsenal based on the September 2005 joint statement in the Six Party Talks; (2) North Korea walks away from the Six Party Talks, breaks the self-imposed moratorium on long-range missile tests and, for good measure, prepares for an underground nuclear test; (3) it maintains strategic ambiguity by not breaking off multilateral negotiations, but marginalizing them through a de facto South-North political entente; and (4) the regime collapses with the rise of a hybrid party-army leadership. Other permutations are possible, but given the unique nature of the Kim Jong Il regime – the world's only Marxist dynasty – intra-family succession supported by the Korean People's Army probably means that without nuclear weapons, North Korea's ability to sustain a "threat envelope" would weaken considerably.

Negotiation proponents argue that with enough incentives and security guarantees, Kim Kong Il could emulate Libya's Qaddafi. But Qaddafi's oil enables him to maintain minimum living standards for Libyans – which practically guarantees his stay in power – whereas for Kim Jong Il, he has no choice but to go down the path of extensive liberalization and reforms. If Kim crosses the denuclearization Rubicon, he then has to make strategic choices in other critical fronts: structural economic reforms, downsizing of the armed forces, improved ties with his sworn enemies, and influx of foreign capital and competing ideologies. Ironically, the cascading consequences of dismantling his nuclear weapons could be as burdensome as retaining them.

One of the key points that often go unnoticed is how differently the six parties perceive North Korea's nuclear program. The Bush administration's tacit preference is probably self-inflicted regime change, but so long as Kim reigns in the army and maintains iron-clad rule, sudden regime change is not around the corner. China's views are more nuanced and complex: Beijing is clearly irritated by Pyongyang's nuclear program, but it also serves certain strategic dividends. It's not entirely unreasonable to envision a North Korea that maintains nuclear ambiguity checks and constrains US and Japanese forays. For its part, Russia seems to realize that it lost the Korean portfolio to the Chinese after the collapse of the Soviet Union and seeks to benefit from bolstering Pyongyang. Among the five parties, Japan is perhaps most worried about a nuclear and ballistic missile-prone North Korea. But if the Self Defense Forces ever needed a rationale for robust modernization and rejuvenation of the US-Japan alliance after the Cold War, North Korea continues to provide an almost perfect alibi. Last but not least, South Korea stands to lose most from a nuclearized North Korea, but is in the throes of cognitive dissonance and strategic denial.

In the realm of possibilities, a breakthrough could yet come at the 11th hour. But North Korea may already have attained de facto nuclear weapon status. As far as Iran is concerned, Pyongyang offers the best field manual in becoming a nuclear-weapon state. This could be one of the unintended and lasting consequences of allowing North Korea to have nuclear weapons, right below our eyes.

Chung Min Lee is a visiting professor at the Lee Kuan Yew School of Public Policy, National University of Singapore. He is currently on leave from the Graduate School of International Studies, Yonsei University, Seoul, Korea.