North Korea’s missile launches in early July, despite repeated pleas by all, enraged an international community worried about a growing threat to global security. The launches even provoked North Korea’s longtime allies, China and Russia, prompting both parties to sign on to the UN resolution calling for sanctions. South Korea, which favored negotiations and reconciliation with the North, now stands at a policy crossroads. The sanctions include the ban on “transfer of any financial resources” to North Korea, which could significantly reduce South Korean aid to the North and affect trade with Russia, the Middle East and Africa. Analysts suggest that a missile launch by the isolated and economically destitute North Korea reflects Kim Jong Il’s attempt to placate his military to ensure the survival of his regime. He now must decide whether to dismantle his nuclear program, return to six-party talks or launch more missiles. – YaleGlobal 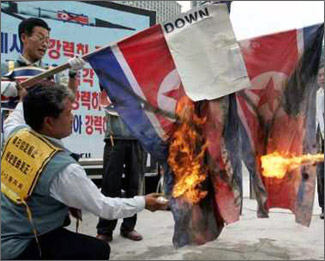 SEOUL: On his first extended meeting some years ago with Vladimir Putin in Moscow, North Korean leader Kim Jong Il reportedly joked to his host that his weeklong train trip over Siberia had taught him all he needed to know about the new Russia. Judging by Moscow’s and Beijing’s reactions at the United Nations to Kim’s missile threat, that remark may now be seen as misplaced cockiness.

Despite slightly toning the text down at the behest of Russia and China, the UN Security Council issued a unanimous resolution condemning North Korea’s recent series of missile launches in international waters and imposed sanctions – which must have come as a shock to Kim Jong Il. The July 5 launches by North Korea in defiance of international opinion, including its closest ally and neighbor China, proved to be the last straw for Moscow and Beijing, after patiently trying to shield Pyongyang against an enraged international community. More significantly, North Korea’s latest round of missile brinkmanship may have soured its relations with South Korea, whose political and economic support has been invaluable to a nation teetering on the brink of disaster.

That China’s effort to head off a UN resolution imposing sanctions might fail became clear the day after China dispatched Deputy Prime Minister Hui Liangyu and Vice Foreign Minister Wu Dawe to Pyongyang. After rejecting the Chinese premier’s call not to launch the missiles, Kim refused to meet with Beijing’s envoys. So far, there is no indication that China has held back shipments of food and fuel to North Korea, evidently concerned that reducing food supplies could trigger a wave of hunger across North Korea, resulting in tens of thousands of North Korean refugees flooding over the border. Beijing’s signing on to the UN resolution calling for sanctions is a major policy reversal that does not bode well for Kim

At the insistence of China and Russia, the UN resolution did not invoke “Chapter VII” – the clause that enabled the US to initiate military action against Iraq. Nevertheless the resolution has tough penalties, requiring all UN members to prevent the procurement of missiles or missile-related materials, goods and technology from North Korea, and the transfer of any financial resources in relation to North Korea’s missile or WMD programs. Not known is how the resolution will affect North Korea’s trade with Russia, its main supplier of technology and arms, but the requirement potentially blocks an important hard-currency source for North Korea and export of its missiles to the Middle East and Africa. Perhaps more significantly, the resolution hampers South Korea’s controversial “sunshine” policy of reconciliation and engagement with the North. While the South may still want to aid the North, the US and others may interpret the ban on the “transfer of financial resources” related to Pyongyang’s development of nuclear arms to include all aid. As cash is fungible, any financial aid would free North Korea from other burdens to fund its weapons program. Objections along this line could potentially impede the South’s ongoing economic aid, which amounts to several million dollars in cash to the North each year in the form of merchandise imports, wages for North Korean workers at Kaesong Industrial Park and tourism fees.

Goods made in Kaesong are already a subject of contention between Seoul and Washington in negotiating their free trade agreement. Washington objects to including Kaesong products as made in South Korea because they are made by workers who have no right to labor organization or human-rights protection. The US and Japan would dearly love to stop such hard-currency earnings altogether.

Even before the Security Council resolution, voters pressured President Roh Moo Hyun to reduce the level of economic aid, as reflected by the ruling party’s near-complete defeat in May elections. The firing of missiles exacerbated that sentiment. Kim’s development of nuclear arms at the expense of feeding his people has so enraged public opinion in South Korea that his policy has become untenable.

On July 12 and 13, demonstrators protesting with a mock North Korean missile disrupted the ministerial talks in the South. A statement from the chief North Korean delegate – that South Koreans owed their security to North Korean missiles – outraged the public and forced Roh to back down from an earlier promise to deliver half a million tons of rice and fertilizer.

Another blow to North Korea, China has dropped its support for North Korean demands of direct bilateral talks with the US, at least for the time being. Moscow and Beijing officially sided with the US in demanding that Pyongyang return to the six-party talks on dismantling its nuclear weapons program. On July 16, Chinese President Hu Jintao told a news conference in St. Petersburg that North Korea should return to the six-party talks.

But China is making a last-ditch effort to get North Korea back to what it calls an “informal” six-party conference setting, designed for the US and North Korea to hold unofficial bilateral talks on the sideline. The US accepts that proposal because it maintains the facade of holding the talks within the six-party framework. The North has so far avoided rejecting this formula.

In the wake of limited UN sanctions, the South is linking food aid with the North’s return to the six-party talks and suspension of the nuclear program. A day after the Security Council resolution, Seoul let it be known that it is no longer interested in holding a joint Liberation Day ceremony in Pyongyang on August 15, representing a major retreat in the process of reconciliation.

In the hardening atmosphere, the US and South Korea are coming closer to accepting five-party talks, with Japan, Russia and China – and excluding the North. This could be the ultimate form of isolation against Pyongyang and a relatively trouble-free venue for further sanctions against the North.

China cannot be happy to see how North Korean brinkmanship is leading to an emerging hard-line Japanese policy. North Korea’s demonstrated hostility against Japan – the kidnapping of Japanese citizens and the 1998 firing of missiles over the skies of Japan – has driven Japanese voters to embrace rightwing leadership. Japan banned a North Korean ferry docking in Niigata port. The next move involves banning remittance of Japanese yen to North Korea. Suggestions from Liberal Democratic Party leaders like Shinjo Abe and Taro Aso, that Japan consider the right of preemptive strike on North Korean missile-launch pads, have triggered concern in Seoul and Beijing.

In Seoul, there is a mounting concern that Kim has become a hostage of his own Army First doctrine, or songun. By placing his regime’s safety over all other considerations, he has allowed conservative generals to sabotage the six-party talks. Yet another theory suggests that he is generating tension over the peninsula to justify installing his son in succession.

Regardless of interpretation, South Korea is concerned about setbacks in its policy of peace and reconciliation. Pak Gil Yon, North Korea’s ambassador to the UN, declared Pyongyang retains the right to test more missiles, and intelligence briefings in Seoul report that the North has four medium-range missiles ready for launch. Will Kim Jong Il see the writing on the wall and return to the informal six-party talks or take his country from the frying pan to fire?

© 2006 The Yale Center for the Study of Globalization