For Now, Hong Kong Protests Do Not Faze Investors

In Hong Kong, the recent mass demonstrations against proposed anti-subversion legislation have not shaken foreign investors' confidence. In the following essay, Frank Ching argues that while anti-government political activism might scare off investors in most countries, Hong Kong has benefited from its international reputation as a stable and investor-friendly economy. However, Ching says, continued disaffection among the Hong Kong population would eventually affect international business and foreign investment. Hong Kong plays an important role in the global economy and trade, and any long-term disruption in the territory is bound to have regional and global repercussions. Moreover, Ching notes, persistent popular dissidence and anti-government agitation in Hong Kong would also have profound political implications. It could undermine not only China's control over Hong Kong, but also Beijing's efforts to persuade Taiwan to 'rejoin the motherland' under the same 'one country, two systems' model it has promoted for Hong Kong. – YaleGlobal

For Now, Hong Kong Protests Do Not Faze Investors

But an incompetent government or heavy-handed action from Beijing could drive them away
Frank Ching
Tuesday, July 29, 2003 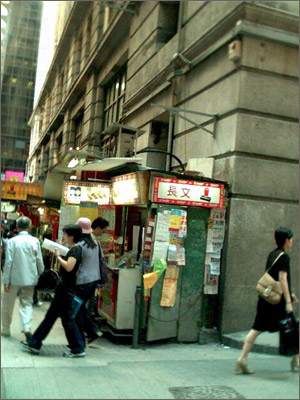 Hong Kong: Even after protests, it's business as usual. (Photo: Copyright © 2003 Andy Woo)

HONG KONG: A demonstration by 500,000 people against any government is usually taken as a sign of mass discontent, if not political instability. One would expect nervous foreigners to pack their bags and foreign investors to reconsider their investments. Curiously enough, none of this happened in Hong Kong recently, when close to a tenth of the territory's population marched peacefully, some even carrying their children in strollers. Rather than take off on the first available flights, foreign businesspeople stayed put, generally unperturbed by this show of political activism. In these foreigners' complacency lies the evidence of Hong Kong's difference with its sovereign master, Beijing. It also carries an implicit message of support for the people of Hong Kong and a warning to Beijing: Any attempt by China to cast Hong Kong in its own image would not only kill the goose that lays the golden egg, but also damage China's international standing.

In the spring, Hong Kong was in the news because the Chinese Special Administrative Region was the world's prime victim of the Sars virus. In the last few weeks, however, it has been the focus of attention for an entirely different reason: the unwonted political activism of its inhabitants.

On July 1, half a million people showed their general unhappiness by staging a protest against anti-subversion legislation required under Article 23 of the Basic Law, Hong Kong's mini-constitution, which many considered draconian. This culminated in the withdrawal of the three most controversial provisions and the postponement of its enactment by the government. 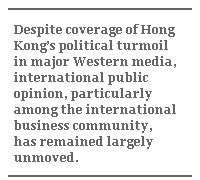 Since then, there have been smaller protests - but still well-attended - on July 9 and 13, the latter to demand the speeding up of democratic reforms. The political pressure culminated in the resignation of two key ministers, Financial Secretary Antony Leung, who is being investigated by the Independent Commission Against Corruption, and Secretary for Security Regina Ip, who was responsible for the Article 23 legislation. For Hong Kong, the resignations were unprecedented.

China's response has been surprisingly moderate. It did not accuse "black hands" of being behind the rallies, as it did in 1989 during the Tiananmen Square demonstrations. But Chinese officials have warned darkly that Hong Kong is an "economic city" and that over-politicization would undermine its status as an international financial center and a business hub. The Chinese need not have worried. Despite coverage of Hong Kong's political turmoil in major Western media, international public opinion, particularly among the international business community, has remained largely unmoved. "Most business people don't think the situation in Hong Kong will change," said Hiroshi Matsui, secretary general of the Japanese Chamber of Commerce in Hong Kong. "Business activities are still stable. In Japan we have lots of similar cases, of changes in ministers. What's important for business is stability - always."

The reaction of the international business community shows how global financial markets can sometimes remain unaffected by political change. The international perception of Hong Kong as a relatively stable and investor-friendly financial market effectively counters expressions of political dissent. John Rutherford, Associate Director-General of Investment Promotion for the Hong Kong government, says there has been no downturn in the number of requests for information from potential investors. In fact, 2003 is shaping up as another record year. "I don't believe what's going on in the political world will have an impact," Mr. Rutherford said. "Low tax, a level playing field, that's what businesspeople are looking for." Jim Thompson, head of Crown Worldwide Group and chairman of the American Chamber of Commerce, echoed that sentiment, saying "this is not classified as a revolution. The government is unlikely to be overthrown." 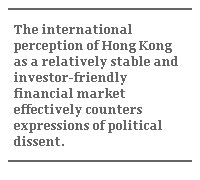 Christopher Hammerbeck, the executive director of the British Chamber of Commerce, doesn't think there has been any affect on business. "I think at the end of the day Hong Kong is such a stable place," he asserted. Business people, he said, "are more interested in executing their business plans" than in demonstrations.

The initial reaction of foreign businesses, however, cannot be taken for granted over the long-tem. If the political standoff between the government and the citizenry continues, international businesspeople could change their minds about Hong Kong. "If the uncertainty continues and there is a feeling that the SAR government is incompetent," said Hammerbeck,"then clearly that will have an impact. People will say, 'Why go to Hong Kong? We can go straight to Shanghai or Beijing.'"

There is also the possibility that Hong Kong's new-found political activism may spill over into the mainland. The Hong Kong demonstrations were the largest on Chinese soil since the Tiananmen Square demonstration of 1989, and there is little doubt that if big-scale rallies should take place in China proper, the authorities would not hesitate to crack down once again. This raises the possibility of China once again facing economic sanctions from the West, only this time the economic impact on the whole world would be much greater.

Even if disturbances are confined to Hong Kong, there would be a major international outcry if China were to send tanks into the streets. Strategically located Hong Kong has the world's freest economy and is its 10th largest trading entity (6th if the EU is considered as one entity). It is the second largest recipient of direct foreign investment in Asia (after China). Any disruption to Hong Kong's economic activities would have a major regional and global impact.

This is even more true of China, which in the 14 years since Tiananmen has climbed up to become the world's sixth largest economy and is expected to rank second by the end of the decade, behind the United States but ahead of Germany and Japan. China is also the 6th largest foreign trader, and manufacturer par excellence of the world's products, from shoes to computers, furniture to toys. (Nearly 80 percent of the footwear sold in the U.S. is produced in China.)

Sanctions against China, therefore, would hurt the rest of the world almost as much as they would hurt China. In the U.S., for example, trade with China supports 200,000 jobs-jobs which would be lost in the event of a rupture in the trading relationship.

Moreover, the way China treats Hong Kong would affect Taiwan's perceptions of the mainland. After all, "one country, two systems" - the policy under which Hong Kong is granted a high degree of autonomy-was invented with Taiwan in mind. If Hong Kong's rights and freedoms are seen to be under threat, Taiwan can be expected to denounce Beijing, and tension might heighten in the Taiwan Strait, one of the most volatile flashpoints of East Asia.

To sum up, foreign investors, at least for now, are not overly concerned by the political events in Hong Kong. But that would change dramatically if they begin to question the government's ability to run Hong Kong. Investors are more interested in stability than in progress towards democracy, but they have little reason to fear democracy. After all, developed countries are all democracies. But the way democracy is achieved is important: it should happen through evolution, not revolution.

Frank Ching is a Hong Kong-based journalist and commentator.