Now You See It, Now You Don’t

On September 20 – one day after committing to halt its nuclear weapons program and rejoin the Nonproliferation Treaty – the North Korean foreign ministry issued a statement essentially rescinding its position. By refusing to abandon its weapons program until it receives a civilian light-water reactor for generating electricity, writes journalist Shim Jae Hoon, the North is essentially trying to buy itself more time. And, according to Shim, this tactic is nothing new: "North Korea has been notorious for its blackmailing style in negotiation," he says. Kim Jong-il's recalcitrance stems from the vital role he believes nuclear weapons – or even the threat of developing an arsenal – play in maintaining the stability of his regime, both economically and militarily. "Indeed," notes Shim, "Pyongyang has every incentive to stall on the progress of six-party talks, where it can raise new demands in exchange for any progress." Unless the talks move to the UN Security Council, he warns, "progress on the North's denuclearization will likely be measured in years, not months." – YaleGlobal

Now You See It, Now You Don't

North Korea withdraws its supposed nuclear concession amid concern that it wants to have its cake and eat it too
Shim Jae Hoon
Thursday, September 22, 2005 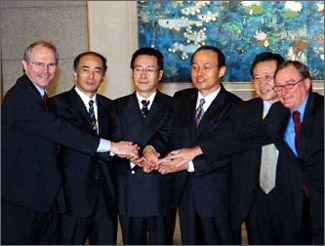 Bait and switch? Despite the smiles and handshakes, North Korea withdraws its concession one day after the close of the Six-Party Talks

SEOUL: The ink had barely dried on the joint statement signed in Beijing after two years of haggling, when North Korea provided a new roadblock to dismantling its nuclear weapons program. By returning to its familiar approach of "one step forward, two steps back," North Korea has demonstrated that it has not abandoned its goal of using the talks to bolster its own regime security rather than to denuclearize the Korean peninsula.

Only a day after committing to give up nuclear weapons development and rejoin the Nonproliferation Treaty regime – from which it had bolted in 2003 – the North's foreign ministry issued a statement on September 20 overturning its position. Refusing to abandon nuclear arms until first receiving a civilian light-water reactor for electric power generation, Pyongyang went against the previous joint agreement, which called for abandonment of the nuclear program – "at an early date" – before beginning any discussions regarding the reactor.

In Seoul and Washington, senior officials have dismissed the move as diplomatic posturing aimed at raising the stakes for future talks. That may very well be the case. However, the North's saber-rattling bears a clear roadmap. In view of the steady drumbeat of propaganda attacks on the United States following this reversal, Pyongyang's negotiators will likely devise further stalling tactics.

North Korea has been notorious for its blackmailing style in negotiation. Historically, it has backed down only when extreme pressure made its position untenable. It took nearly three years of talks, along with bloody fighting, to negotiate an end to the mid-century Korean War. The treaty was signed only after Joseph Stalin's death cast an uncertainty over the future. Likewise, it took two years to negotiate the 1994 Geneva framework agreement, under the threat of a US bombing on the Yongbyon nuclear facility.

By insisting on a new reactor before ending its weapons program, the North is essentially trying to buy more time. Acquisition of a nuclear arsenal is not only a ticket for survival of Kim Jong-il's regime in the face of a virtually collapsed economy, it is also a bargaining chip for securing the withdrawal of US ground troops from South Korea. To the North Korean leader, the latter goal is as crucial as the former, for he remains firmly committed to removing the US forces, which symbolize the US-Korean security alliance.

In a nutshell, Kim is using the six-party process as a platform for achieving two separate goals: securing aid and recognition while removing the 31,000 US troops stationed in South Korea. The alliance stands in the way of reunification on Kim's term, giving him the possibility to indirectly shake the South by subversion. This basically aggressive stance toward Seoul explains the maintenance of a million-strong army, which has crippled his economy. Forward deployment of heavy artillery along the border would rain down thousands of shells per minute on Seoul – paralyzing the world's 10th-largest economy.

Demand for a civilian reactor thus complicates the ongoing discussion on the nuclear issue. Under the earlier Agreed Framework worked out in Geneva in 1994, the North agreed to freeze its graphite-moderated reactors in Yongbyon for a half-million tons of fuel per year supplied by United States. South Korea had begun construction of two light-water reactors in North Korea; shortly thereafter, the North was discovered secretly developing a highly enriched uranium-based weapons program. The US promptly ended the "fuel-for-freeze" deal, but not before South Korea had spent US$1 billion for the power plant foundation work.

In view of this preliminary construction and Seoul's offer to supply two million kilowatts of electric power once Pyongyang dismantles its nuclear program, it is unlikely that North genuinely needs a new civilian reactor. Given this background, the reactor demand seems mainly geared toward buying more time for a clandestine nuclear program now running on two tracks: plutonium and uranium models. Completing a new reactor takes at least five to six years, at an estimated cost of up to US$3 billion, experts say. It hasn't even been decided who will finance this project.

How much progress the North has made so far on the highly enriched uranium program is uncertain, but Pakistan President Pervez Musharraf has recently confirmed that disgraced nuclear scientist Dr. A. Q. Khan confessed to delivering an unknown number of centrifuges required for the enrichment process. The North first admitted to this program in 2002, but now denies it – a denial that makes it difficult to include this item on the agenda of talks.

But no such ambiguity exists on the plutonium-based program. With IAEA's inspection seals broken and inspectors thrown out in 2002, some 8,000 fuel rods from graphite-moderated reactors have been extracted for culling bomb-making plutonium. US officials have estimated Pyongyang may have enough material to build up to six atomic bombs.

Time is thus an essential element in the current drive to stop the North from expanding its nuclear arsenal. Equally worrisome is its ballistic missile capability: The test-firing of a Taepodong missile over Japan in 1998 has raised serious implications on the North's delivery capability.

Clearly, a speedy resolution to the nuclear standoff is in North Korea's interest. Indeed, Pyongyang has every incentive to stall on the progress of six-party talks, where it can raise new demands in exchange for any progress – as with the latest agreement. For their part, China and Russia have slowly begun applying pressure on their erstwhile ally; unfortunately, the more they do so, the more urgent the perceived need for Pyongyang to develop an independent nuclear option.

In this calculated strategy of risky brinkmanship, South Korea plays an unintended role of supporting Pyongyang's diplomacy of deception. The more Kim needs independent strategic leverage against China and Russia, the more it will rely on the South's largesse to fuel its nuclear, as well as conventional, arms buildup. Over the past decade of Seoul's "sunshine" policy of reconciliation with Pyongyang, the South has provided a large sum of cash payments to the Kim regime. (Hyundai business group alone has paid at least US$1.5 billion for tourism projects.) Additional supplies of food and fertilizer have practically saved the North from an otherwise certain economic collapse.

Seoul's generosity has led the North to tone down its belligerence toward the South and soften its rhetoric on reunification. The focus has now shifted to a united-front strategy that stresses national unity versus foreign "interferences."

So long as it continues to receive food and cash from the South, Pyongyang will not proceed toward an early resolution of the nuclear crisis. The left-liberal government in Seoul indirectly encourages this trend by focusing its policy on more aid and less complaint on human rights violations. Unless the issue moves to the UN Security Council or gains urgency or momentum elsewhere, progress on the North's denuclearization will likely be measured in years, not months.

Shim Jae Hoon is a Seoul-based journalist and columnist.