Is a Nuclear Deal with North Korea Feasible?

North Korea is getting ready to launch a satellite again, using a long-range rocket that could reach Alaska. Analysts wonder if this is an attention getter for the new US administration or an attempt by a fading leader to prepare the population for succession while warning foreign enemies. The leader of the struggling nation, Kim Jong Il, could be testing out an old trick on a new administration, leveraging their nuclear arsenal and missiles to secure recognition and aid, suggests American University professor Peter Beck. While dealing with North Korea, Washington would have to take into consideration the interests of regional partners in the Six Party talks, from Japan’s demand to know what happened to citizens abducted by North Korea more than 20 years ago to China seeking stability along its border. Disunity among the neighbors would not help to elicit a consistent message from North Korea. Breaking the current logjam in negotiations may require a bold offer, including normalization of relations, light water reactors that provide power and more economic assistance. But if Pyongyang rejects such an offer, then the parties must be prepared to take punitive action, the author concludes. – YaleGlobal

Is a Nuclear Deal with North Korea Feasible?

Kim Jong Il rattles the saber to get the most out of a new US administration
Peter M. Beck
Friday, February 27, 2009 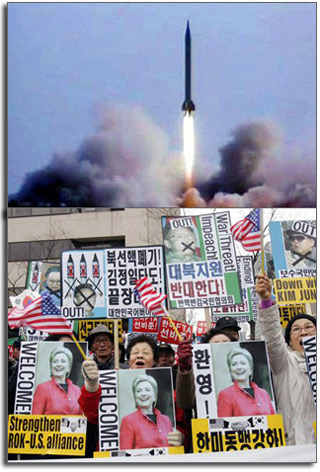 WASHINGTON: With US spy satellites focused on North Korea for the announced launch of a satellite aboard an intercontinental ballistic missile capable of reaching Alaska, the idea of a nuclear deal with Pyongyang may seem remote. But that would be a hasty conclusion. The long-range missile test may well be North Korea’s habitual way of seeking attention and getting an invitation to talk. It’s not that Washington does not want to talk, but it will be difficult to deliver what North Korea wants – US recognition and massive economic aid and dissolution of US-South Korea military alliance in exchange for a promise of dismantling its nuclear program.

Indeed during her recent visit to Asia Secretary of State Hillary Clinton suggested the Obama administration will adopt a balanced approach that combines multilateral talks with bilateral engagement with Pyongyang. The challenge will be to get the other key players to support this strategy. Ultimately, a “bold initiative” that abandons North Korean denuclearization as a precondition may be the only way to really test North Korea’s intentions. Given North Korea’s track record in making concessions with one hand and withdrawing with another, such bold initiative may indeed be, to borrow from Samuel Johnson’s adage about remarriage, “the triumph of hope over experience.” 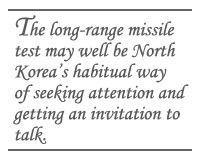 The fact that the North Korean leadership is adopting an apparent bellicose posture such as shooting long-range missile despite clear overtures from Washington requires us to consider what Pyongyang really wants. One way to get at this is to ask if Pyongyang has determined it needs more enemies or friends. If it needs enemies to rally the public, then we’re in for a rough ride. Kim Jong Il may have concluded that he needs enemies to justify his failed rule and succession to an under-achieving son. If the Kim decides he needs friends who can provide security guarantees and assistance, then the rhetoric is just a prelude to a deal.

Unfortunately, conflicting position that Tokyo and Beijing hold toward North Korea will not make it any easier for Washington to test Pyongyang’s intentions. Clinton’s first stop in Tokyo illustrated just how difficult policy coordination on North Korea will be, even with America’s biggest ally in Asia Clinton’s meeting with family members of Japanese abducted by North Korea was a reminder that Japan with its emotional abductee issue is an obstacle when it comes to engaging North Korea. Ever since former Prime Minister Koizumi Junichiro visited Pyongyang in the fall of 2002 and Kim Jong Il l admitted he had abducted a dozen Japanese citizens, Japan’s public has made the return of those citizens the top priority. Pyongyang insists it has turned over all the survivors. The North is either unable or unwilling to provide Tokyo with sufficient evidence concerning the fate of the rest. However useful it may be for domestic political consideration by allowing the abduction issue to dictate policy, Tokyo has added a twist to the denuclearization talk. Demanding information on the abducted, Japan took the biggest carrot the world had to offer the North, billions of dollars in developmental assistance in lieu of reparations for colonial rule, off the table. 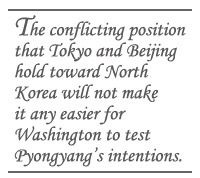 Coordination with China, the country with the greatest influence over the North, will be equally difficult. For China, stability on its northeastern border is more important than denuclearization. Beijing does not want hundreds of thousands of North Koreans flooding into China in search of food or American and South Korean troops on its border in the event the North were to implode. Thus, there are virtually no conditions under which Beijing will curtail, much less cut off, its assistance to the North. The Bush Administration liked to insist that the reason North Korea came back to the negotiating table in late 2006 was because China had gotten tough with the North by backing the UN sanctions resolution after the North conducted a nuclear test. While clearly not happy, Beijing never implemented the resolution, nor was there any interruption in economic assistance. Even in the face of a global economic crisis, Beijing appears willing to spend several billion dollars a year to prop up the North. This undermines any sticks Washington might try to use.

Given Tokyo and Beijing’s positions, the key will be working with South Korea to make the North an offer it can’t refuse. Contrary to earlier worry, including this writer’s article “Lessons Obama Can Learn from the Wily North Korean,” the election of a Democratic president in the US has not complicated the two countries’ approach. Ironically, though South Koreans have opted for a more conservative president and legislature and Americans the opposite, the prospects for effective coordination have never been better. That is because based on the worldviews presidents Obama and Lee Myung-bak have espoused so far and the foreign policy teams they have put together, both are pragmatic moderates. Lee is a businessman, not an ideologue. His foreign minister and national security advisor are seasoned diplomats with extensive experience in Washington. Liberals in Seoul blame them for the North’s increasingly belligerent policy toward the South, but all Lee and his team have done is recalibrate an unconditional engagement policy that had yielded Seoul little in return. A strong majority of the Korean public, to the extent they even care about North Korea, continue to favor a more balanced policy toward Pyongyang. 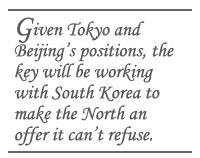 Given the lack of a major shift in South Korean policy, why has Pyongyang become so bellicose? For the simple reason that the North potentially has much to gain and little to lose. Despite the rhetoric, the joint industrial complex in Kaeseong in North Korea, across the border from South, expanded its output by more than 20 percent last year. Although North is more ambivalent about this “poisoned carrot” that brings North Korean workers in daily contact with their cousins from capitalist South the conservative Lee administration will be reluctant to give up the one remaining pillar of reconciliation under almost any circumstances, including a missile test. Like Obama, Lee refuses to let his antagonists get him worked up and repeatedly states that he will wait for the North to come around. What does the North have to gain? Besides trying to drive a wedge between Washington and Seoul, the North seeks a return to the era of no-strings-attached largesse. The North sees Seoul as a cash register, not a nuclear negotiating partner. Moreover, they also know that if they can cut a deal with Washington, Seoul will have little choice but to pay for it.

It may well be that in the end, the North will try to play it both ways: continue to negotiate for goodies while never giving up its nuclear trump card. After all, that is essentially what it’s done for the past 16 years. We may have to live with the fact that the nuclear talks may be little more than a “crisis management mechanism.” But managing a crisis is better than ignoring it, and it leaves open the possibility of achieving a deal. 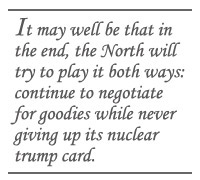 At the current glacial pace of the negotiations, we’re unlikely to see a denuclearized North Korea before Obama leaves office, even if he is reelected in 2012. Of course, there’s one sure way to jump start the negotiation process: Send Hillary Clinton to Pyongyang. Clinton declared in Seoul that she had no plan or even intention to visit Pyongyang, nor should she until Pyongyang signals to her special envoy, Stephen Bosworth, that it’s ready to accept a deal. Breaking the logjam will require the kind of “bold initiative” that the Bush administration only hinted at six years ago.

Working closely with Seoul, Washington must make an irresistible offer – normalization, completion of the two light water reactors scrapped by Bush and economic assistance. A “shotgun wedding” may just be the most effective way of testing the North’s intentions. However, there’s one catch. We must be prepared for a possible rejection by the North. In which case, we must be prepared to use the shotgun.