US interest in Ukraine focuses on the country’s shared border with Russia, the Russian invasion and annexation of Crimea soon after a puppet’s departure in 2014, and interference in the country’s eastern section. US President Donald Trump’s emphasizes other priorities, including improved relations with Russia, according to a non-verbatim transcript of a July telephone call between Trump and Ukraine’s President Volodymyr Zelensky released on September 25 and comments during a meeting of the two presidents the same day. Concerns about Ukraine and Trump’s unorthodox approach in foreign affairs have triggered the start of an impeachment inquiry, sidelining other matters. A New York Times article suggests that Trump was fixated on Ukraine, blaming the country for contributing to a counterintelligence investigation of his campaign: “Trump’s focus on Ukraine started after a law enforcement organization, the National Anticorruption Bureau of Ukraine, released damaging information about cash payments earmarked to his campaign chairman, Paul Manafort, by the Russia-aligned political party of Ukraine’s ousted former president.” Trump countered with his own investigations: The Justice Department is reviewing how the counterintelligence investigation of the Trump campaign began. Trump’s personal lawyer, Rudolph Giuliani, has also pushed for investigations in Ukraine, and Trump asked the new Ukrainian president to investigate corruption of Joe Biden, a leading political opponent. Giuliani claims the State Department supported his efforts, but was blocked in Ukraine from meeting with Zelensky. Trump and Giuliani also questioned Zelensky’s removal of a prosecutor described as corrupt. – YaleGlobal

The US president focused on Ukraine, not to prevent hostile moves by Russia but to urge investigations on origins of the Muller investigation and Biden
Kenneth P. Vogel, Julian E. Barnes, Maggie Haberman and Sharon LaFraniere
Thursday, September 26, 2019

Read the article from the New York Times about the US president’s attempt to influence investigations in Ukraine.

Ken Vogel covers the confluence of money, politics and influence from Washington. He is also the author of “Big Money: 2.5 Billion Dollars, One Suspicious Vehicle, and a Pimp — on the Trail of the Ultra-Rich Hijacking American Politics.”

Julian E. Barnes is a national security reporter based in Washington, covering the intelligence agencies.

Maggie Haberman is a White House correspondent. She joined The Times in 2015 as a campaign correspondent and was part of a team that won a Pulitzer Prize in 2018 for reporting on Donald Trump’s advisers and their connections to Russia.

Sharon LaFraniere is an investigative reporter. She was part of a team that won a Pulitzer Prize in 2018 for national reporting on Donald Trump’s connections with Russia. 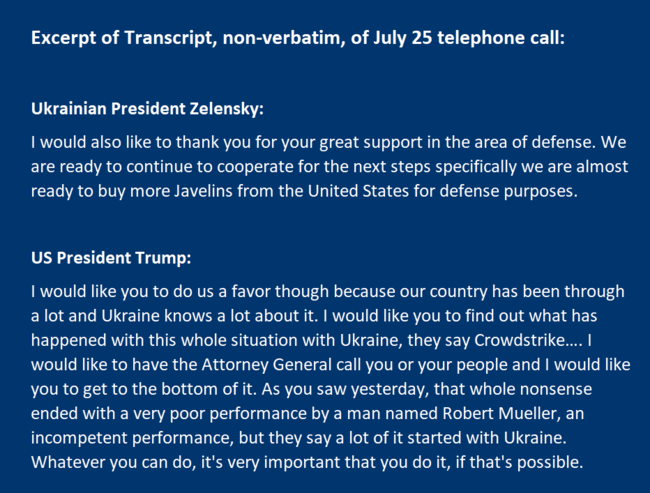