Ocean in a Changing Climate: IPCC

The ocean covers more than 70 percent of earth’s surface. “Human communities in close connection with coastal environments, small islands (including Small Island Developing States, SIDS), polar areas and high mountains are particularly exposed to ocean and cryosphere change, such as sea level rise, extreme sea level and shrinking cryosphere,” notes the recent 1,170-page IPCC report “The Ocean and Cyrosphere in Changing Climate.” Cyrosphere refers to Earth’s water that is in solid form like ice. “Other communities further from the coast are also exposed to changes in the ocean, such as through extreme weather events.” The world confronts disasters as ice sheets and glaciers lose mass, arctic snow cover and sea ice shrink and permafrost temperatures rise, the report notes. The Southern Ocean bears the brunt of warming in this century, and warming contributes to acidification and reduced oxygen. Regardless of efforts, the ocean is expected to warm throughout the 21st century, and ongoing carbon release will only exacerbate the challenges. The most vulnerable nations, typically with low carbon emissions, have least capacity to respond. The warnings in the report are specific and dire, urging policymakers to prioritize “timely, ambitious, coordinated and enduring action.” – YaleGlobal

Ocean in a Changing Climate: IPCC 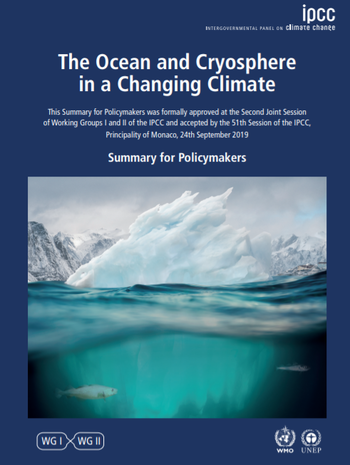 Read the special report on “The Ocean and Cyrosphere in Changing Climate” from the Intergovernmental Panel on Climate Change.”

Policymakers Must Consider and Prepare for Consequences

“Sea-level rise is not globally uniform and varies regionally. Regional differences, within ±30% of the global mean sea-level rise, result from land ice loss and variations in ocean warming and circulation. Differences from the global mean can be greater in areas of rapid vertical land movement including from local human activities (e.g. extraction of groundwater)….

“Cryospheric and associated hydrological changes have impacted terrestrial and freshwater species and ecosystems in high mountain and polar regions through the appearance of land previously covered by ice, changes in snow cover, and thawing permafrost. These changes have contributed to changing the seasonal activities, abundance and distribution of ecologically, culturally, and economically important plant and animal species, ecological disturbances, and ecosystem functioning….

“Coastal ecosystems are affected by ocean warming, including intensified marine heatwaves, acidification, loss of oxygen, salinity intrusion and sea level rise, in combination with adverse effects from human activities on ocean and land (high confidence). Impacts are already observed on habitat area and biodiversity, as well as ecosystem functioning and services (high confidence)….

“Since the mid-20th century, the shrinking cryosphere in the Arctic and high-mountain areas has led to predominantly negative impacts on food security, water resources, water quality, livelihoods, health and well-being, infrastructure, transportation, tourism and recreation, as well as culture of human societies, particularly for Indigenous peoples (high confidence). Costs and benefits have been unequally distributed across populations and regions. Adaptation efforts have benefited from the inclusion of Indigenous knowledge and local knowledge (high confidence)….

“Coastal communities are exposed to multiple climate-related hazards, including tropical cyclones, extreme sea levels and flooding, marine heatwaves, sea ice loss, and permafrost thaw (high confidence). A diversity of responses has been implemented worldwide, mostly after extreme events, but also some in anticipation of future sea level rise, e.g., in the case of large infrastructure….

“Risks of severe impacts on biodiversity, structure and function of coastal ecosystems are projected to be higher for elevated temperatures under high compared to low emissions scenarios in the 21st century and beyond. Projected ecosystem responses include losses of species habitat and diversity, and degradation of ecosystem functions. The capacity of organisms and ecosystems to adjust and adapt is higher at lower emissions scenarios (high confidence)….

“Future shifts in fish distribution and decreases in their abundance and fisheries catch potential due to climate change are projected to affect income, livelihoods, and food security of marine resource-dependent communities (medium confidence)….

“Impacts of climate-related changes in the ocean and cryosphere increasingly challenge current governance efforts to develop and implement adaptation responses from local to global scales, and in some cases pushing them to their limits. People with the highest exposure and vulnerability are often those with lowest capacity to respond (high confidence)….

“This assessment of the ocean and cryosphere in a changing climate reveals the benefits of ambitious mitigation and effective adaptation for sustainable development and, conversely, the escalating costs and risks of delayed action. The potential to chart Climate Resilient Development Pathways varies within and among ocean, high mountain and polar land regions. Realising this potential depends on transformative change. This highlights the urgency of prioritising timely, ambitious, coordinated and enduring action.”