The Aceh region of Indonesia, among the hardest hit in last year's tsunami disaster, could be a strategic center in Indonesia's battle with terror – and in the larger struggle for security in Southeast Asia, writes Christopher Jasparro. Several groups with differing political aims – Islamic militants, Acehnese separatists, the Indonesian army, and international relief groups – find themselves sharing the post-disaster space. The US response to the tsunami tragedy has won points with Indonesia's press and public, leading many Indonesians to re-evaluate their prior judgments on Western motivations in the region. Post-tsunami aid has also opened a window for Washington's involvement in Indonesia's humanitarian issues and security efforts. But the tensions between Western agents and radical Indonesians may overwhelm the spirit of cooperation. And with the Indonesian government's suspected support of militants – in its effort to quell a separatist threat – a unique dynamic is emerging in Aceh. If the West is unable to leverage its newly earned confidence to affect positive change, dangerous terror groups may fill the void. For now, the tides seem relatively calm, but time alone will tell how long Aceh will stay that way. – YaleGlobal

As Indonesia rebuilds from the December disaster, new developments may shift the battle for security in Southeast Asia
Christopher Jasparro
Wednesday, March 23, 2005 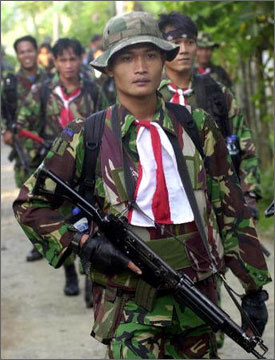 Back to business: After a brief lull brought by the tsunami disaster, the Indonesian army is back on the trail of Acheneses rebels

HONOLULU: The tsunami tragedy has begun fading from the headlines, but the aftermath of relief efforts in Indonesia's Aceh could have far-reaching consequences. Located at the strategic tip of Sumatra dominating the Malacca Straits, Aceh could emerge as the new cockpit of struggle between separatists, Islamic militants, and Indonesian government – affecting the war on terror and security in Southeast Asia.

Two developments have altered the dynamics in post-tsunami Indonesia. First, US and international aid efforts have received widespread and positive press attention in Indonesia. As a result, many Indonesians are now questioning their previous negative assumptions about Western attitudes and policies: According to the first post-tsunami poll in Indonesia, 65 percent of respondents viewed the US positively. US-Indonesian military cooperation after the tsunami opened the door for resumption of US military assistance. Indonesia now may receive US$600,000 to US$800,000 in 2005 through the International Military Education and Training (IMET) program (suspended in 1992 due to concerns over the Indonesian Army's human rights record). IMET proponents believe this will create opportunities for the United States to influence Indonesia's human rights behavior in Aceh and elsewhere.

The other new element is the arrival of several Java-based militant Islamist organizations in Aceh. The Indonesian army (TNI) helped transport some militants into Aceh, presumably to aid recovery efforts. However, these groups may also be enjoying implicit support of particular government elements in their attempt to quell the separatist Free Aceh Movement (GAM).

And thus, we find an intriguing new dynamic: Relief efforts have opened the door for increased US influence in Indonesia, while at the same time, the presence of militant groups has expanded in Aceh. These developments prompt questions of broad security significance: How will the increased Western relief effort affect the ongoing Achenese struggle? What could be the consequence of a growing Javanese militant presence on internationalist terrorist activities launched from this part of Indonesia?

So far, these organizations have mainly passed out leaflets or recovered dead bodies. Despite terrorism warnings, statements by militants suggest an uneasy truce has emerged for now. One Lakar Mujahidin (LM) member told reporters, "As long as they [foreign troops] are here to help, we will have no problem with them." Hilmy Bakar Almascaty (FPI Aceh chief) also stated, "So far, America has come here like an angel, but if it turns into a Satan as it did in Afghanistan and Iraq, we must fight it."

However, many of the militants' relief efforts are believed to be covers for proselytizing activities, which have three possible goals: sowing radical ideologies amongst the local population, discrediting the secular Indonesian government through highlighting any inefficiency and corruption in the relief effort, and infiltration of local mosques and NGOs. They may also be positioning themselves to fight the Free Aceh Movement (GAM). Radical Islamists deplore its ethno-nationalist, separatist agenda (which runs counter to their desire to make Indonesia a unified Islamic state), and Islamic practice, which they see as insufficiently pure.

Many hope the tsunami tragedy will boost peace talks between GAM and the government. Indeed, in February, rebel leaders reportedly dropped a demand for independence. Although more rounds of talks are scheduled, they have yet to yield firm results. This week Indonesian police announced that forces, which had been diverted from anti-GAM duties in the tsunami's aftermath, will soon be redeployed against the rebels.

Some analysts even suggest that the TNI may use militants as proxies against GAM – a possibility that could increase should talks fail. Others view TNI facilitation of militants as incompetence or inexperience amongst some generals, political battles within the army, or as a hedge against foreign influences and domestic charges of favoritism to foreign relief agencies. Government spokesmen have downplayed these worries, contending the groups are engaged in humanitarian activities.

However, their presence is far from innocuous and raises questions for global and regional security should outside militants gain a sustainable foothold in Aceh.

Indonesian radical group Jemaah Islamiyah (JI) and Al-Qaeda have exploited other conflict and disasters in different parts of the world to recruit, gain combat experience, spread ideology, and reinforce propaganda suggesting that Muslims are under attack worldwide. Should radical transnational ideologies infuse the Aceh insurgency (currently led by narrowly focused GAM), reaching a political settlement will become more difficult and the conflict's level of intensity and brutality will likely increase. Aceh could then provide Al-Qaeda and JI a needed new base for training and developing operatives.

Also, the presence of such groups at the Malacca Strait's mould would pose a significant threat to vital global sea lanes. Al-Qaeda has been involved in several successful and attempted maritime attacks – most notably USS Cole in Aden – and has a doctrine of causing economic disruption through assaulting key infrastructure and transport nodes. The LM is believed to have experience small boat operational experience, while JI has also attempted maritime operations.

If the US and international community fail (or are perceived to fail) to support long-term recovery efforts, and militant groups step into the breach, then positive feelings generated in the tsunami's immediate aftermath will fade. This might possibly lend credence to conspiracy theories floating around the Islamic world that the tsunami was punishment for Indonesian impiety and assistance to US counterterrorism efforts.

So far, however, the ripples emanating in the tsunami's wake have increased security rather than strengthened the radicals. The Javanese militants have met with antipathy. GAM calls them as "criminal organizations." While student-led NGO Sentral Informasi Referendum Aceh (formed in 1999 to call for a referendum similar to the one held in East Timor) warned that militants "would steer the conflict in Aceh into a religious one." The militants are so overmatched by the international community's capabilities that their efforts have had minimal influence in Aceh and beyond. Their lack of capacity may actually be undermining their credibility throughout Indonesia.

The United States, Australia, Japan, and Singapore seem determined to follow through for the long-haul which could thus sustain boosted images. So far, Achenese seem to reject the radicals questioning radical Islamists' ability to deliver and challenging the validity of claims that there is a global war against Muslims. Initially, security off Aceh's waters improved after the tsunami. It appears to have killed large numbers of pirates, destroyed pirate bases and equipment, possibly changed water depths in pirate operating areas, and brought international scrutiny to the area. More recently, pirate activity off Sumatra has resumed – but it appears to be business as usual, rather than acts by outside militants.

Allowing foreign forces into its territory was a major step (more significant and surprising than JI leader Abu Bakar Bashir's light sentence handed recently by a Jakarta court) and a strong indication of President Yudhoyono's intention to improve the security relationship with the United States. IMET's resumption will, it is hoped, further boost relations by exposing Indonesian officers to US views (including human rights) and opening new lines of dialogue between the countries' militaries. The training and education provided should boost Indonesia's capacity to fight terrorism and other transnational threats.

Dr. Christopher Jasparro is a researcher at the Asia-Pacific Center for Security Studies in Honolulu, Hawaii.