Japan's economy faces enormous challenges in the years ahead. It must both continue to compete with other fast-growing economies, like China, while finding a way to support and replace its aging work force. A critical challenge for Japan is how to handle the fast-graying population and the attendant health and retirement costs. By far the most problematic of such issues is the enormous concentration of people and capital around Tokyo, despite the vast availability of land in rural parts of the country. Japan could solve these problems, despite their complex nature, by making some simple structural changes. One policy adjustment, which would open this land to development and reduce pressures on urban areas, is the elimination of tolls. The nation's highway system, though fully developed, undergoes constant expansion, financed by borrowed money and requiring expensive maintenance, resulting in the expensive tolls. By opening the highway system and financing its maintenance with a tax on gasoline, Japan could attract investment and industry to its rural areas as well as migrants. Though the country remains saddled with many other burdens - dire public finances, difficulty attracting and assimilating immigrants, and among the world's highest land costs - eliminating the tolls would make Japan's economy more competitive and give its aging population room to breathe. – YaleGlobal 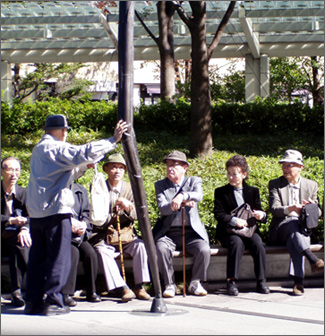 Blocked by toll road: Confinement of Tokyo's elderly to the city is bad news for Japan's economy. (Photo: Nayan Chanda/YaleGlobal)

TOKYO: A visitor to Japan who sees only Tokyo assumes the nation is wall-to-wall people. But a short ride to the countryside reveals a sparse landscape of fields and a scattering of elderly farmers. And there lies a challenge for Japan in the 21st century. The migration of people to the cities that fueled Japan's postwar economic miracle now hangs like an albatross around the neck of the economy. The twin forces of globalization - in the shape of rising industrial power of China and an aging workforce - could hamper Japan's return to an era of growth, with serious impact on the world economy.

The urban concentration that served the Japanese economy so well in the postwar years is no longer an asset in the age of globalization. Baby boomers reaching retirement age could become a major liability to cities like Tokyo.

Geographically, Japan is slightly smaller than California, and some 82 million people - 65% of the overall population - live in cities that together cover just 3% of that tiny landmass. The greater Tokyo metropolitan area is home to 33 million people. Yet only several hours away the change is startling, with rice fields and quiet towns populated almost exclusively by the elderly. The tremendous concentration of people is the legacy of the migration of young workers from farming villages to the cities that fueled Japan's postwar economic growth. Inexpensive raw materials from around the world were imported to factories in the greater Tokyo area, turned into superior products and shipped back out worldwide. Up until the 1980s, this process of economic growth transformed Japan into the world's largest creditor nation.

But the limits of this strategy became plain in the 1990s when globalization began to change the structure of the world economy. China replaced Japan as the factory to the world, and Japan's domestic manufacturing sector lost many of its advantages. Companies like Toyota and Canon managed to ride out the crisis by joining the globalization bandwagon. By moving factories from the costly Tokyo area to China and elsewhere and opening new consumer markets, many Japanese companies took earnings to their historically highest levels.

Unlike corporations, however, the citizenry cannot leave Japan. The graying of Japan poses an additional challenge. Huge numbers of baby boomers in Japan who retire over the next several years will have an immense direct impact on Tokyo and the other cities where the majority work and live. Because of the seniority system, these baby boomers have the highest salaries and make the biggest contributions to tax revenues. Soon, however, they will become an enormous drain on tax revenues. The home ownership rate of Tokyo is 41.5%, which is lowest among all Japan's prefectures. Citizens in Tokyo continue to pay expensive rents after retirement even though they do not receive high salaries anymore.

Over the next ten years the elderly population in the greater Tokyo metropolitan area is forecast to grow by 2.5 million to a total of 8.4 million people. The increase will require the construction of many more healthcare facilities and the purchase of large tracts of land in the Tokyo area, one of the most expensive property markets in the world.

In short, individuals, companies and the governments in the Tokyo metropolitan area will bear the costs of Japan's aging society. And this, in turn, will lower the cost-competitiveness of the Japanese economy another notch.

Japan's public finances are already in the worst shape among the G7 nations - Canada, France, Germany, Great Britain, Italy, Japan and the US. The outstanding balance of Japanese government debt is US$9.2 trillion - more than double its GDP of US$4.4 trillion. The added cost of an aging society will soon complicate matters. If the government does not encourage people to move into outlying areas and ease the high population concentration in Tokyo, the Japanese economy could begin to stagnate.

Despite this harsh reality, Japan has yet to take any serious measures to manage the problem, even while solutions are close at hand, as typified by Kisarazu, a city of rice fields and vacant industrial zones that sits across Tokyo Bay from Tokyo. A driver can reach Kisarazu from Tokyo's Haneda Airport, the busiest transit port in Japan, via a highway and a bridge in just 20 minutes. And the land there costs a thousandth of the price for property in central Tokyo. Land zoned for industrial parks in the Kisarazu area costs about US $190 US dollars per square meter while the land of the Marunouchi Building, in front of Tokyo Station, costs about US $190,000 US dollars per sq m.

Kisarazu has few homes, offices, shopping centers, or hospitals because of the costly highway and bridge: Because a ten-mile trip costs $30 one way, few use the route for commuting or for business.

Outside the cities, people depend on cars for more than 90 percent of their transportation needs. Yet the tolls on Japanese highways are the highest in the world. The drive from Tokyo to Aomori is only 500 miles, but costs $150 in tolls, one way.

Prime Minister Koizumi plans to "privatize" the highways starting this year in a move that guarantees high tolls into the future. He advocates a transition from a bureaucratic-managed economy to one based on market principles.

Under private ownership, the highways will never be as free as they are in principle in the US, Germany and Great Britain. Prohibitively expensive transportation costs will continue to exacerbate the over-concentrated urban population.

The tolls are not necessary for building highway infrastructure: Japan already has a fully extended system of roadways, and an equivalent of a quarter of all tax revenues are spent on roadway investments. That is four times the amount spent by Germany, whose roads cover about the same land mass as Japan, and two-thirds of that spent by the US, which is 25 times larger. Yet Japan continues to build roads on borrowed funds, charging highway tolls and heavily taxing its drivers. The main beneficiaries are construction companies and the political parties they support.

If Japan changes its tax system to fit within the scope of the global standard - in other words, if roads are constructed and maintained out of car-related taxes such as a gasoline tax that does not involve debt financing - this could ease the fiscal burden and lead to an end of the tolls. It would reduce high land prices associated with the concentration of people in the greater Tokyo area, encourage redistribution of the elderly population, and develop lands that now sit economically fallow.

But so far, the winds of the Koizumi revolution have not reached this breakthrough. By simply abolishing tolls on the highway to Kisarazu, the government could reverse the trends. Otherwise, astronomical land prices and lopsided urban concentration could end the current boom in a way that would reverberate around the globe.